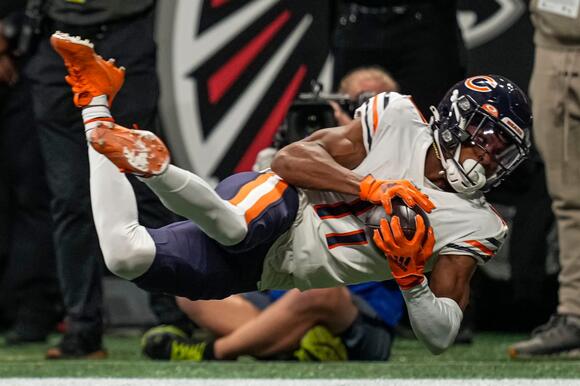 Who to sit and who to start in fantasy ball from the Bears and Jets game along with a pick on the game against the latest spread.

Justin Fields had become the darling of fantasy football after a stretch when he scored at least one touchdown rushing and passing in five straight games.

With his shoulder injury there is nothing but uncertainty for those owners who had acquired him or drafted him.

Anyone playing him needs to look very seriously at their other alternatives. Fields' name must be removed from consideration for this week's fantasy lineup but it doesn't necessarily mean his targets in the offense will suffer, as well.

Without Fields, Bears yardage and plays needs to come from someone. It will be more conventional, as receivers and backs pick up some of the yards, carries and receptions Fields has been swallowing up.

Here's who to start and who to sit from Sunday's Bears and Jets game.

It's going to feel a little like old times for Montgomery, who matched his season high for carries last week with 17 and had 67 yards. He hadn't run for more since Week 2. With Justin Fields either out or severely slowed, and no Herbert around, the offense is going to move through Montgomery. He might even take a good number of wildcat snaps. Despite an ankle injury earlier and being forced to split carries with Herbert, Montgomery has 705 total offensive yards this year.

Carter isn't having a second season as good as his rookie year, as he is averaging 3.8 yards a carry. That's 0.5 a carry off last year. However, he will get the most carries for a Jets offense that will be going up against a spotty Bears defense and he is on pace for more receptions than when he had 36 last year. With only three TDs this year, he can be expected to knock at least one in this week. QB Mike White will lean on him and the easy targets in the Jets offense for underneath yardage against the Bears zone. The Bears have given up 149 yards rushing or more five times. Expect Carter to come up with a big chunk of yards.

The Ohio State rookie has been everything the Jets hoped for with 44 receptions for 533 yards, although just two TDs. With the Bears defensive back corps depleted, Wilson and Jets receivers should be able to come up with a few bigger receptions even if the player throwing them is third-stringer. Wilson's 4.38-second speed in the 40 makes him a deep threat against Jaylon Johnson or Kindle Vildor.

The former Vikings tight end hurt the Bears in one game at Minneapolis in 2020 and is particularly adept at separating on shorter routes even behind the line of scrimmage and then picking up YAC. He ha the second-most receptions at 35 for 331 yards with three TDs, the most by a Jets player. Without Jaquan Brisker around to cover the tight end, Conklin could become an even bigger

It will be very interesting to see how the timing is in the passing game if Siemian starts, because he hasn't worked with the starting receivers much at all and even in training camp was with backups for the most part. Mooney might even catch more passes as the ball will be coming out if it's Siemian. Fields occasionally held the ball and ran on downs where receivers did come open late. Maybe Mooney gets more than the 40 catches for 493 yards and two TDs that he has this year.

Look for Kmet to be a big target for Siemian if he plays. The tight end is the quarterback's best friend and finding Kmet open over the middle could be easier than going downfield for Mooney or Chase Claypool. Kmet had a slow start but is at 11.9 yards a catch, which would be a career best.

He might seem like a potential target for White because the two are familiar with each other from four games last year. However, Berrios barely made an impact in those games as a target and had seven receptions in the four games White started.

He had a 405-yard game with three TDs last year against the Bengals, but was incredibly bad in the other games with 202, 95 and 251 yards to go with six interceptions. Look for him to be very conservative with his throws.

There is no reason to think they would risk playing him unless his injury has been grossly overreported by the team. Even if he did start, the physical, aggressive Jets front would make running difficult for him and Jets DBs like Sauce Gardner have been tough to throw against.

He's going to have to show it first, following three weeks of being a non-factor in the Bears offense.

Yes, the Jets defense is a no-brainer in this one for standard leagues with team defense. They have held five of their last six opponents to 17 points or less, which is basically unheard of in this era. Last week they lost allowing 10 points and 297 yards.

An IDP league choice du jour would be Sauce Gardner or Jordan Whitehead. Whitehead has two interceptions on the year and it would be very easy to see Siemian or Fields trying to force one in to Kmet with Whitehead in tow. Jets DE Carl Lawson is also a choice as Braxton Jones seems to win over analytics websites like Pro Football Focus but he fails the eye test as a pass blocker.

THE SPREAD AND TOTAL

Prop Picks: Former Vikings TE Conklin over 27 1/2 yards receiving looks like a lock. The shorter receiver routes will get better looks from a new QB and Conklin is adept at creating separation. Also, Michael Carter over the total of 45 1/2 rushing yards. The Bears defense shouldn't fool anyone, particularly on the ground.

TICKETS TO SEE JUSTIN FIELDS AND THE BEARS THROUGH SI TICKETS

When the Cincinnati Bengals take on the Kansas City Chiefs in the AFC title game on Sunday night, they’ll be doing it without three of their starting offensive linemen as La’el Collins, Alex Cappa and Jonah Williams will all be sidelined from the game with injuries. The three...
CINCINNATI, OH・16 HOURS AGO
BearDigest

After an interception in the season finale, cornerback Greg Stroman will get a chance to return in the 2023 season.
CHICAGO, IL・2 DAYS AGO
BearDigest

The Indianapolis Colts could have several players available in free agency or otherwise who would interest the Bears.
CHICAGO, IL・15 HOURS AGO
Sportsnaut

The Los Angeles Clippers carry a five-game winning streak into the second game of a weekend back-to-back on Sunday, a
CLEVELAND, OH・8 MINUTES AGO
BearDigest

What History Says for Chase Claypool's Chances to Succeed

History isn't kind to wide receivers who get traded in the middle of the season and here's what it says for Chase Claypool.
CHICAGO, IL・1 DAY AGO
BearDigest

Setting goals for the second year of this Bears rebuild as they move toward wins over foundation building.
CHICAGO, IL・7 HOURS AGO
BearDigest

One analyst has the Vikings defensive lineman landing ideally in Chicago even playing in a scheme he hasn't peformed in well.
CHICAGO, IL・2 DAYS AGO