'This is All We Have, But This is all We Need' Personifies This Alabama Team 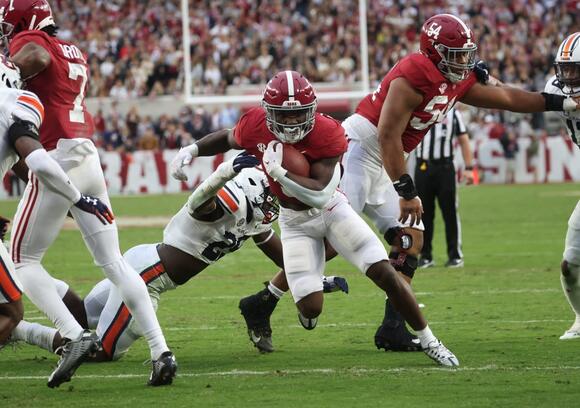 The slogan by Will Anderson Jr. carried the Crimson Tide through November to keep alive its College Football Playoff hopes.

TUSCALOOSA, Ala. — Are we done yet, or just beginning?

That was the prevailing feeling at Bryant-Denny Stadium on Saturday, when the Alabama Crimson Tide closed the 2022 regular season unsure of its status, and about what may come next.

With the College Football Playoff still a very realistic possibility, Alabama will have to wait to see how things play out next week, while Nick Saban hits the recruiting trail with a lot things up in the air.

Assistant coaches may land other jobs. Players are already entering their names into the transfer portal. Others have to start thinking about the NFL.

Was this the last game for the likes of quarterback Bryce Young and linebacker Will Anderson Jr.? They wouldn't be blamed for saying no thanks to playing in a bowl game.

Yet they could still play for another national championship.

There's just no way to know.

So Alabama did what it could, win against Auburn, and simply enjoy it.

"Be where our feet are," senior defensive back DeMarcco Hellams said.

"No better way to go out," defensive lineman DJ Dale said after the 49-27 victory.

Even if things don't work out for Alabama regarding the playoff, this team left Bryant-Denny Stadium feeling pretty good about what it had accomplished, and it should.

It stayed together, bounced back from the tough final-play loss at LSU and won at Ole Miss, then ranked No. 11. The Crimson Tide also posted a solid win against its biggest rival, Auburn on Saturday afternoon, with Young passing for 343 yards and three touchdowns, and ran for another score in perhaps his final home game.

At some places, the quarterback would have already been done, or the star linebacker, or some of the standout defensive backs, etc. What Alabama did while bouncing back wasn't easy, especially since so many things had to go right for it to have a playoff shot.

All one has to do is look at the rest of college football to see that. One-by-one the contenders continue to fall, while the Crimson Tide kept treading water to stay alive for the national championship.

It wasn't just about them, but the coaches as well. How many times have you heard someone complain about the play-calling? Or  the blitzing. Even the team's strength and conditioning, all by those who had no idea of the preparation that took place this week, this month and this year.

So Anderson came up with the motto that turned into a mantra and the rallying call for the Crimson Tide:

"This is All we Have, But This is all we Need."

Everyone took it to heart.

"We just kind of ran with it," senior guard Emil Ekiyor Jr. We even say it in our game warmups or pre-practice warmups. It's kind of the mentality of the team. We embraced it and it brought us closer together."

It gave Alabama something to rally around, and it showed.

From kicker Will Reichard's tackle on the opening kickoff, to senior linebacker Henry To'oTo'o leveling a ballcarrier on the final possession, the heart Alabama played with against Auburn wasn't fake.

It wasn't for the playoff push, either.

"We just decided to try play for each other," Hellams said.

Meanwhile, in the Fail Room, visiting locker room, the Tigers were dealing with another loss and finishing below .500. They're not bowl eligible, and the naming of a new head coach appears imminent.

Hugh Freeze was reportedly close to having a deal done to bring him back to the Southeastern Conference, with a better job than the one he previously held. If so, second chances and forgiveness will again be a theme at Auburn (especially after his team at Liberty collapsed against New Mexico State and went down in flames with three straight losses).

The point is, distractions can be difficult at this level, just ask the other person thought to be up for the Auburn gig, Lane Kiffin. Ole Miss lost four out of its final five games.

Saban, the coaching staff and the players made sure something like that didn't happen at Alabama. He went out of his way to mention that the culture is strong, and the future remains bright.

However, he also took time to note that negative attitudes and naysayers among the fan base where hurting the program and university.

"This program was built on positive," he said. "It was built on 95,000 people coming here for the spring game when we came here and everyone wanted to be a part of that."

A lot of them still do.

I'm positive about that.

Confidence Was Obvious for Alabama in Iron Bowl Victory

Auburn HC Cadillac Williams: "We Didn't Get It Done"

Everything Nick Saban Said After Alabama Won the Iron Bowl

Instant Analysis: No. 7 Alabama Football 49, Auburn 27 at the Iron Bowl

Get your Crimson Tide tickets from SI Tickets HERE .

Your daily briefing on what's going on with Alabama athletics, and how to watch the Crimson Tide.
TUSCALOOSA, AL・12 HOURS AGO
BamaCentral

Tale of the tape with No. 1 Purdue; Give credit to the man who aimed to make Alabama a basketball school; and the final word on Bill O'Brien heading back to New England.
TUSCALOOSA, AL・5 HOURS AGO
BamaCentral

Recruiting Rundown: How Does Alabama Compare to SEC so far with Class of 2024?

In the early portion of the 2024 recruiting cycle, how is Alabama stacking up to the rest of the conference?
TUSCALOOSA, AL・20 HOURS AGO
BamaCentral

After a close win at Arkansas, will Alabama be able to shock the country and beat the Gamecocks?
TUSCALOOSA, AL・20 HOURS AGO
BamaCentral

Joe and Clay discuss who could replace Bill O'Brien and then analyze the Crimson Tide's upcoming showdown against the Sooners on the hardwood.
TUSCALOOSA, AL・1 DAY AGO
BamaCentral

Just A Minute: Any Worries From No. 2 Alabama's Close Win Over Mississippi State?

The Crimson Tide scraped by with a 3-point win over the Bulldogs. Are there any concerns about this performance moving forward?
TUSCALOOSA, AL・1 DAY AGO
BamaCentral

How to Watch: No. 2 Alabama Basketball at Oklahoma

The Crimson Tide and Sooners will meet in the 2023 SEC / Big 12 Challenge in Norman, Okla. on Saturday afternoon.
TUSCALOOSA, AL・1 DAY AGO
BamaCentral

The Crimson Tide won a big SEC game to jump up in the conference standings.
TUSCALOOSA, AL・1 DAY AGO
BamaCentral

Live Updates: No. 13 Alabama Gymnastics vs. No. 10 Kentucky

Score updates and analysis for the Crimson Tide's competition against Kentucky being held in Lexington.
TUSCALOOSA, AL・17 HOURS AGO
BamaCentral

It's the first time players have spoken to the media since Miles was arrested and charged with capital murder.
TUSCALOOSA, AL・23 HOURS AGO
BamaCentral

Crimson Tide doesn't get the benefit of doubt from the rest of the league after the way the 2022 season ended.
TUSCALOOSA, AL・1 DAY AGO
BamaCentral

Why Both Alabama and New England Fans are Pleased with Bill O'Brien Move: All Things CW

The former Crimson Tide offensive coordinator is being hailed as the savior of the Patriots offense; why Jalen Hurts is about to get snubbed again; and what are SEC softball coaches thinking?
TUSCALOOSA, AL・21 HOURS AGO
BamaCentral

Easy Draw? No such thing in 2023 SEC Tournament: All Things CW

No matter how Alabama basketball ends up being seeded, the Crimson Tide could be looking at very tough bracket in Nashville.
TUSCALOOSA, AL・1 DAY AGO
BamaCentral

No. 2 Alabama Can Grow From Hard-Fought, Gritty Win Over Mississippi State

The Crimson Tide has been winning in style for much of 2022-23, but it can also win ugly — which is important.
TUSCALOOSA, AL・2 DAYS AGO
BamaCentral

The BamaCentral staff breaks down the Crimson Tide's win over the Bulldogs from Coleman Coliseum.
TUSCALOOSA, AL・2 DAYS AGO
BamaCentral

Will Alabama finish with an all-around score of 197.000 this weekend?
LEXINGTON, KY・1 DAY AGO
BamaCentral

Tracking the Conference Championships: Bama in the NFL

5 Things to Know About Championship Weekend: Bama in the NFL

The key matchup to watch may be how 49ers defensive coordinator DeMeco Ryans will try and limit Eagles quarterback Jalen Hurts.
TUSCALOOSA, AL・1 DAY AGO
BamaCentral

The Extra Point: The SEC Player of the Year Race