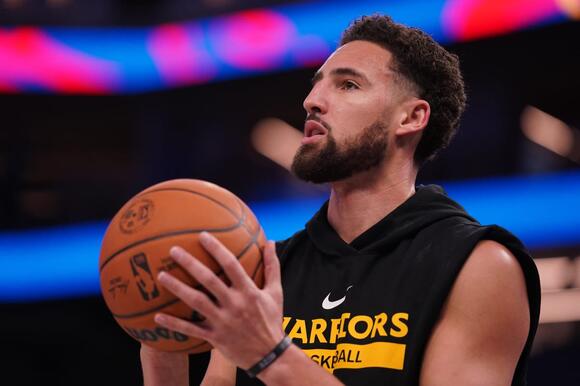 During Klay Thompson's early season struggles, TNT analyst and NBA Hall-of-Famer Charles Barkley said the Golden State Warriors guard is no longer the player he once was. Upon hearing these comments, Thompson responded honestly, saying they hurt his heart.

"To hear someone say, 'Oh, he's not the same as he was prior to the injuries.' Like, duh," Thompson said. "Who goes through something like that and comes back? Like, I don’t know, it just hurt my heart hearing that. But, you know what? I’m gonna internalize it and it’s gonna be fuel for me to be even better. I’m very proud of what we accomplished last year, and I feel like I was a huge part of it. I’m not gonna let these injuries be a crutch for me. I’m just gonna keep going and I’m gonna have a great year. Bet on that."

Thompson added that he feels he deserves more respect for helping the Warriors win another championship last season despite his injuries the two years prior. Having begun to find his rhythm again, Thompson has started delivering on his promise to be better. While some believe Charles Barkley owes him an apology, Shaquille O'Neal says not quite yet.

When asked on a recent podcast episode if Barkley owes Thompson an apology, Shaq said, "No. Because this is the [20th game]... The problem when you do great things, is everybody wants you to be great. Yes he's getting older, I wouldn't say he's slowing down, but when you have a severe injury - two severe injuries on the same leg, it's gonna take your game away a little bit... [Klay] had a great game last night, last week, but can he do it again?"

Shaq said the Warriors have always been strong because of their consistency, which is why he is not ready to look beyond their early season struggles after a few signs of life. While he does not believe Thompson needs apologies now, he is ready to start calling for them if he keep this up.

"If [Klay] can continue playing like that, then we definitely owe him an apology," Shaq said.

Steph Curry on Track to Make NBA History This Season

Los Angeles Lakers superstar LeBron James was in his feelings on Sunday night after watching his old Cleveland teammate Kyrie Irving get traded to the Dallas Mavericks. As the Irving trade set the NBA ablaze on Sunday, James found himself on the losing end of the massive transaction. The Lakers were pegged as a possible trade destination for Irving, but it was not meant to be.
LOS ANGELES, CA・11 HOURS AGO
The Comeback

Shocking and frankly terrifying news broke regarding Memphis Grizzlies superstar Ja Morant on Sunday afternoon. The story doesn’t quite paint the 2022 Most Improved Player or his associates in the most positive of lights either. The Athletic delivered a bombshell report that detailed the shocking incident. It occurred last month after a game between Morant’s Grizzlies Read more... The post NBA world reacts to absolutely shocking Ja Morant news appeared first on The Comeback: Today’s Top Sports Stories & Reactions.
MEMPHIS, TN・14 HOURS AGO
The Spun

The failed experiment that was the Brooklyn Nets appears to be coming to an end.  Now, according to NBA insider Chris Haynes, another team out west is looking to land superstar forward Kevin Durant. Per Haynes, the Phoenix Suns are prepared to make a run at Durant should he become available in ...
BROOKLYN, NY・15 HOURS AGO
ClutchPoints

The Golden State Warriors went back to their title-winning starting lineup in a much-needed win at Chase Center on Saturday. Steph Curry, Klay Thompson, Andrew Wiggins, Draymond Green and Kevon Looney raced out to an 18-7 lead over the Dallas Mavericks, overwhelming a visiting team playing without not just top-tier MVP candidate Luka Doncic, but also Christian Wood. If not for Curry leaving late in the third quarter with a lower left leg injury, Golden State surely wouldn’t have almost blown another massive second-half advantage while holding on for a 119-113 victory.
SAN FRANCISCO, CA・1 DAY AGO
Larry Brown Sports

Kyrie Irving terrorized Joe Tsai’s Brooklyn Nets for nearly four seasons, and it sounds like the Nets owner got the last laugh with the problematic guard. On Friday we learned that Irving wanted to be traded by the Nets ahead of Thursday’s deadline. Immediately, there was speculation that Irving would end up with the Los... The post Nets owner got last laugh with Kyrie Irving through petty move appeared first on Larry Brown Sports.
NEW YORK CITY, NY・9 HOURS AGO
OnlyHomers

There have been a number of sad reports coming out of the world of professional wrestling in recent weeks, with former stars passing away, both during their career and following it.
16 HOURS AGO