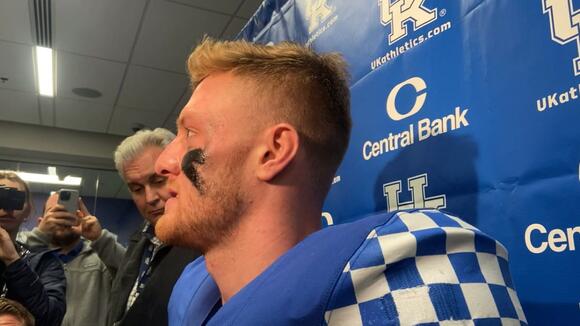 Kentucky offensive coordinator Rich Scangarello, as well as a trio of key offensive players spoke to the media following the Wildcats' 26-13 win over No. 25 Louisville in the Governor's Cup.

You can find quarterback Will Levis' media scrum above, as he reflected about his time at Kentucky, the win on Saturday and more.

Scangarello touched on how happy he was to finally see the offense perform up to its standard. His media scum can be viewed below, as can wide receiver Barion Brown's and running back Chris Rodriguez's:

The rivalry win keeps Kentucky above the .500 mark, giving the Wildcats seven wins in a regular season for the sixth time in the last seven years. Kentucky now awaits its postseason fate, as selections for bowl games are set to be announced on Sunday, Dec. 3.

Want the latest on national football and basketball recruiting, including Cats targets? Head over to SI All-American for the latest news, blogs, and updates about the nation's best prospects.

Sports Illustrated also offers insight, information and up to the minute details for gamblers. Check it out here

Kentucky is back on the road for its fifth road game in SEC play, traveling down to Oxford, Miss. to take on the scrambling Ole Miss Rebels.  The fifth season of the Kermit Davis era down on The Grove hasn't gone according to plan, as the Rebels hold a 9-12 record, including a horrid 1-7 ...
OXFORD, MS・6 HOURS AGO
Wildcats Today

Kentucky center Oscar Tshiebwe will have an opportunity to repeat as the winner of the John R. Wooden Award.  On Monday afternoon, the Wooden Award announced its late season watch list, featuring Tshiebwe and 19 other players at the top of the contenders list for the prestigious honor:  ...
LEXINGTON, KY・10 HOURS AGO
Wildcats Today

Kentucky basketball assistant coach KT Turner spoke to reporters on Monday morning before the Wildcats made their way down to Oxford to take on the Ole Miss Rebels on Tuesday night.  The presser can be seen above:  More on Kentucky's loss to Kansas HERE. Kentucky is leaving the KU loss ...
LEXINGTON, KY・1 DAY AGO
Wildcats Today

How to Watch, Listen: Kentucky-Ole Miss

After failing to conquer the Kansas Jayhawks over the weekend, the Kentucky Wildcats now hit the road once again for another SEC showdown.  This time, coach John Calipari's Cats are down in Oxford, Miss. to take on the Ole Miss Rebels, who're seeking just their second win in conference play ...
LEXINGTON, KY・11 HOURS AGO
Wildcats Today

All eyes were on Rupp Arena over the weekend, as Kentucky basketball took the national spotlight in its matchup against the Kansas Jayhawks in the Big 12/SEC Challenge.  Coach John Calipari's Wildcats were the only team on campus with some important work to do, though.  Kentucky football ...
LEXINGTON, KY・1 DAY AGO
Wildcats Today

LEXINGTON, Ky. — The college basketball season is already swiftly on the back nine, though the opening day of games on Nov. 7 feels like it was just a few weeks ago. Kentucky basketball has just 10 games left in the regular season, ending in Fayetteville on March 4 in a road tilt against ...
LEXINGTON, KY・1 DAY AGO
Wildcats Today

Kentucky head coach John Calipari and Kansas head coach Bill Self both spoke to the media following the Jayhawks' 77-68 triumph over the Wildcats in Lexington.  More on the game HERE. Calipari's presser can be seen above, while Self's can be seen below:  More on Kentucky's loss to ...
LEXINGTON, KY・2 DAYS AGO
Wildcats Today

Everything John Calipari Said After Kentucky's 77-68 Loss to No. 9 Kansas

Below is everything that Kentucky head coach John Calipari said after the Wildcats' fell 77-68 to the No. 9 Kansas Jayhawks on Saturday evening inside Rupp Arena:  JOHN CALIPARI: Hard fought game. Give them credit. They were physical. Their ball screen was really physical, knocked us off point ...
LEXINGTON, KY・2 DAYS AGO
Wildcats Today

No. 9 Kansas Finds Revenge in 77-68 Toppling of Kentucky in Lexington

LEXINGTON, Ky. — It took 364 days, but the Kansas Jayhawks found revenge over the Kentucky Wildcats.  Behind 22 points from Jalen Wilson, coach Bill Self avoided the first four-game losing streak of his tenure in Lawrence, fighting off Kentucky's many half-hearted punches en route to a 77-68 ...
LEXINGTON, KY・2 DAYS AGO
Wildcats Today