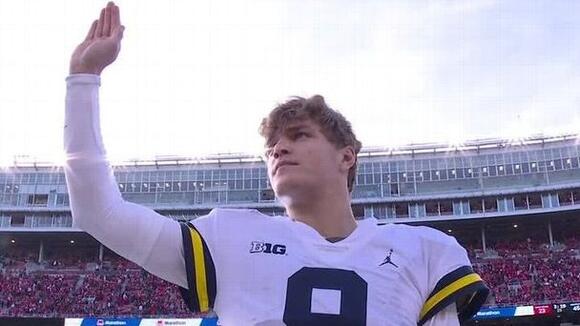 With this being rivalry week, teams pulled out some deep cuts from their bag of jokes. The No. 2 Ohio State Buckeyes started early in the week before they faced the No. 3 Michigan Wolverines in "The Game," but the Wolverines returned the favor after the win Saturday.

Also, the Arizona Wildcats celebrated a win at the Arizona State Sun Devils ' expense and the Mississippi State Bulldogs enjoyed an Egg Bowl win over the No. 20 Ole Miss Rebels with a few barbs toward the team.

Here's a look at some of the best Twitter trolls across college football this weekend:

One of college football's greatest rivalries added another chapter to its story as the Wolverines and Buckeyes met for the 12th time as top-five teams.

The Buckeyes removed any letter "M's" from the school's campus leading up to the game.

However, Michigan got the last laugh with a dominant second half en route to a convincing win over Ohio State. The Wolverines outscored the Buckeyes 28-3 in the second half and forced quarterback C.J. Stroud into two costly interceptions.

Read more : Best moments from No. 3 Michigan vs. No. 2 Ohio State

Michigan quarterback J.J. McCarthy , who finished with 290 total yards and four touchdowns (three passing, one rushing), didn't wait until the game was over to say goodbye to the Buckeyes fans.

Other Wolverines players joined in on the fun, as they planted their school flag on the Buckeyes' logo at midfield during the postgame festivities.

Nittany Lions quarterback Sean Clifford scorched the Spartans, finishing 19-of-24 for 202 yards and four touchdowns. Penn State's defense caused a lot of trouble for Michigan State's offense, holding the Spartans to 4-14 on third down and forcing three turnovers.

The Nittany Lions' Twitter account celebrated winning the Land Grant Trophy with a comical twist on a clip from the "SpongeBob SquarePants" Krusty Krab training video.

The Gamecocks took down their second top-10 opponent in as many weeks with an upset over Clemson. South Carolina quarterback Spencer Rattler finished with 360 yards passing, 2 touchdowns and 2 interceptions.

According to Allstate's College Football Playoff Predictor, Clemson's chances to make the CFP dropped to 6% from 37% with the loss.

Rattler enjoyed a well-earned postgame cigar in the locker room after the victory.

The Terrapins, led by quarterback Taulia Tagovailoa and running back Roman Hemby , dominated the Scarlet Knights. Tagovailoa finished with 342 yards passing and a touchdown while Hemby rushed for 70 yards and three scores. Maryland's defense also deserves props, as it earned its first conference shutout since 2008.

The Terrapins' Twitter account put a clever twist on the Scarlet Knights' name to put this game to bed.

Wildcats running back Michael Wiley ran for 214 and three touchdowns to help his team defeat the Sun Devils. Teammates Jonah Coleman and DJ Williams also each added a score on the ground.

Arizona State's mascot, Sparky, is known for his trusty pitchfork. Arizona's Twitter used the prop for some postgame jabs after the victory.

A 10-point fourth quarter and late 2-point conversion stop by the Bulldogs helped them rally past the Rebels. Mississippi State quarterback Will Rogers finished with 239 yards passing, 2 touchdowns and 1 interception. Running back Jo'quavious Marks led the team on the ground with 76 yards rushing and a score.

Prior to the game, there were rumors that Ole Miss head coach Lane Kiffin would be leaving to coach the Auburn Tigers . Kiffin met with his players Wednesday to assure them he is staying at the school, but WCBI-TV of Columbus, Mississippi, reported Kiffin would be announced as Auburn's head coach as soon as Friday.

Kiffin denied those reports on Twitter and followed up with a news release-style note to the station's reporter. On Saturday, Kiffin signed a contract extension to remain at Ole Miss.

That wasn't the only celebratory jab the Bulldogs took at the Rebels, either.

North Carolina coach Mack Brown has agreed to a one-year contract extension that keeps him with the Tar Heels through the 2027 season.
CHAPEL HILL, NC・16 HOURS AGO
ESPN

College basketball teams to buy or fade ahead of March Madness

With the NCAA tournament field almost a month away, Dalen Cuff looks at some of the top teams around the country and whether you should buy the hype or fade them.
TENNESSEE STATE・2 DAYS AGO
ESPN

QB Jaden Rashada, a 2023 recruit who was released from his national letter of intent by Florida after a NIL deal fell through, said he will play for Arizona State.
TEMPE, AZ・1 DAY AGO
ESPN

The GOAT is hanging them up ... again. After 23 seasons, seven titles and countless records, Brady got congratulations from around the sports world.
TAMPA, FL・1 DAY AGO
ESPN

Meyers Leonard, 30, who last played in the NBA in January 2021 before being suspended for using an antisemitic slur during a livestream of a video game and dealing with injuries, told ESPN's Jeremy Schaap that he expects to play in the NBA again.
2 DAYS AGO
ESPN

Hundreds of millions of dollars will be bet on Super Bowl LVII. David Purdum tracks the biggest bets to the wackiest wagers here.
KANSAS CITY, MO・1 DAY AGO
ESPN

Duke coach Kara Lawson said the teams played with a men's basketball for the first half of a loss to Florida State on Sunday.
TALLAHASSEE, FL・2 HOURS AGO
ESPN

The Orange Krush, a group of Illinois men's basketball supporters, said its purchase of tickets to the Illinois-Iowa game on Saturday was canceled by Iowa. Hawkeyes officials accused the Orange Krush of being deceptive.
IOWA CITY, IA・1 DAY AGO
ESPN

The Southeastern Conference invites their student-athletes from the SEC Football Leadership Council to the conference office in Birmingham this Friday and Saturday.
BIRMINGHAM, AL・12 HOURS AGO
ESPN

Flag football games might eliminate the potential of tackling, but the competition level might actually increase, according to players.
LAS VEGAS, NV・19 HOURS AGO
ESPN

Raiders QB Derek Carr said he has no intention of extending the Feb. 15 trigger date on his contract to give Las Vegas additional time to resolve his situation.
NEVADA STATE・4 HOURS AGO
ESPN

Huntley and the Raiders' Derek Carr helped lead the AFC to a big lead in the Pro Bowl Games skills competition.
BALTIMORE, MD・3 HOURS AGO
ESPN

Colin Castleton scores 20 as Gators take down No. 2 Vols

Colin Castleton scored a game-high 20 points, including 16 in the second half, and Florida upended the second-ranked Volunteers 67-54 on Wednesday night.
GAINESVILLE, FL・1 DAY AGO