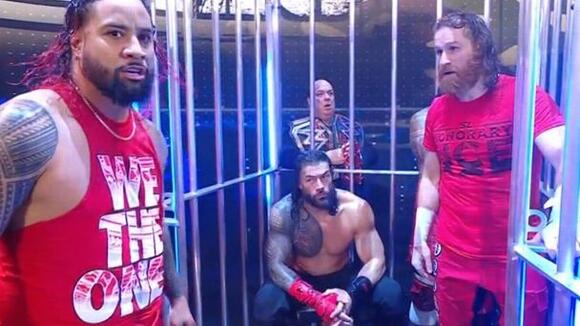 For months, Jey Uso has grown increasingly suspicious of Sami Zayn, an outsider who joined Roman Reigns and The Bloodline as an honorary member.

Jey and Zayn have been at odds week after week, and it seemed to all to a head on Saturday in Boston when Uso delivered a super kick that took out Zayn in the five-on-five War Games main event inside a two-ring steel cage at WWE Survivor Series.

After all, Jey confided to his real-life cousin Reigns, the WWE Undisputed Universal Champion, that Zayn was two-faced and would turn on them in the match after he overheard a conversation between the Honorary Uce and Kevin Owens on Friday Night SmackDown.

But all that doubt was put to rest -- at least for now -- when Zayn came to the rescue and lifted The Bloodline (including Jimmy Uso and Solo Sikoa) to victory over The Battling Brutes (Sheamus, Butch and Ridge Holland) along with Owens and Drew McIntyre.

After Owens delivered his signature Pop-Up Powerbomb, Reigns was reeling, followed by The Stunner. But with Reigns pinned, Zayn was there to restrain the referee from finishing the three-count.

A stunned Owens confronted Zayn, a longtime friend who also hails from Quebec, Canada, only for Zayn to deliver a low blow followed by the Helluva Kick.

With Owens laid out, Zayn ushered Jey to deliver the Uso Splash for the win. And at long last, Jey embraced Zayn with a hug, ending the turmoil that's engulfed The Bloodline.

The frenetic WarGames match kicked off with Jey and Butch in the ring. After The Battling Brutes gained the advantage Friday, Ridge Holland entered the fray three minutes for three minutes of two-on-1 action until Zayn evened it up.

It was McIntyre's turn three minutes later, and he cleaned house with two belly-to-belly throws of Zayn followed by a spinebuster on Jey. And before Reigns even stepped through the ropes, Zayn proved his allegiance by coming to Jey's rescue several times in the match.

McIntyre delivered the Future Shock DDT on Zayn before Jimmy Uso, Jey's brother, joined the action with three tables, much to the crowd's delight. Despite Zayn's support, Jey shoved Zayn, who returned the favor prompting Jimmy to play peacemaker.

Owens entered the ring three minutes after Jimmy to again lend the advantage to The Battling Brutes and immediately drove Jimmy onto a chair with a DDT. Owens then turned his attention to Jey with a cannonball and a Swanton Bomb before focusing on Jimmy again with a slam through the table.

Solo Sikoa entered and fought Owens between the two rings. Owens was able to muster two super kicks, but Sikos responded with a back body drop on the steel plate. The Battling Brutes' leader, Sheamus, leaped into action and made his presence felt with White Noise on Sikoa from the top rope before The Tribal Chief, Roman Reigns, entered the ring to officially commence the match, which could only end via pinfall or submission.

All five members delivered 10 Beats of the Bodhran on The Bloodline before Reigns connected with The Spear on Sheamus. Zayn hammered Butch, who broke up the pinfall, with a flurry of blows while Sheamus planted Sikoa with the Brogue Kick.

That's when Jey went to super kick Butch, only for him to duck. Instead, Zayn was the recipient of Jey's foot, throwing the partnership into further disarray.

The Usos connected on The 1D on Butch from the second rope while Reigns speared Holland through a table.

The action kicked into high gear as Sikoa drove McIntyre through a table with the Spinning Solo, only for Owens to hit Sikoa with The Stunner.

Reigns and Owens began to slug it out until Reigns gained the upper hand with the Superman Punch. Still, Owens responded with a pair of signature moves until Zayn intervened.

A stunned Owens confronted Zayn, a longtime friend who also hails from Quebec, Canada, only for Zayn to deliver a low blow followed by the Helluva Kick.

With Owens laid out, Zayn ushered Jey to deliver the Uso Splash for the win. And at long last, Jey embraced Zayn with a hug, ending the turmoil that's engulfed The Bloodline. As a result, the most dominant faction in wrestling got a little bit stronger Saturday. Good luck to the rest of the WWE roster going into 2023.

Lashley controlled the action from the onset after he delivered a vertical suplex on Theory, followed by a belly-to-belly toss of Rollins, the champion.

The Almighty took turns clotheslining each man in the corner before he delivered a DDT on Rollins while also dropping Theory.

Outside the ring, Rollins hit Lashley with a flying knee from the apron and then drove him into the steps, only for Theory to grab hold of the steps. He used it to take out Rollins and Lashley and then hit Rollins with a rolling dropkick inside the ring.

In one of the highlights of the match, Rollins took turns hitting both Lashley and Rollins with the suicide dive and finally took out both with a somersault that cleared the top rope.

Rollins delivered a sit-down powerbomb on Theory and then went for The Stomp, but Lashley was there and collected Rollins for the uranage.

Lashley tossed Rollins into the Hurt Lock, but Theory was there to lock Lashley in a sleeper hold simultaneously. After they broke free, Rollins connected with a Pedigree on Lashley but missed with the Phoenix Splash.

Theory took advantage and tossed Lashley out of the ring before he clipped Lashley with a rolling blockbuster. Theory then reversed another Hurt Luck into a pin, but Rollins broke the count with a frog splash. With Lashley pinned, Theory attacked Rollins and attempted the Pedigree, too. This time, Lashley was able to throw both into the Hurt Lock, but they rammed him into the corner.

Lashley attempted the spear, but Theory jumped over him. That's when Rollins used Theory as a launchpad for The Stomp on Lashley. With Lashley out of commission, Rollins connected on his patented superplex followed by the Falcon's Arrow, but Lashley came through with a spear with Theory suspended in the air.

He fell on top of Rollins and escaped with the win and the U.S. title, weeks after failing to cash in his Money in the Bank contract successfully.

What's next: Rollins will surely land a rematch with Theory for the U.S. title, but another man who could find himself in the mix is Mustafa Ali, who's been chasing the belt for weeks along with Lashley.

Ronda Rousey retained her SmackDown Women's Championship after she forced Shotzi to tap out in the arm bar.

Rousey weakened Shotzi with an arm bar toss from the top rope and followed up with Piper's Pit. But before that, Shotzi was able to threaten the former UFC star's title reign.

The underdog attempted a tornado DDT on the apron, taking action to the outside. Rousey's longtime friend, Shayna Baszler, ran interference, but Shotzi was able to take out both of them. She dumped Ronda over the barricade, followed by Baszler, before she delivered a crossbody on the pair.

But once back in the ring, Rousey took control for the win.

What's next: With another placeholder title challenger out of the way, Rousey will surely move on to a new rival. But who? Charlotte makes a lot of sense, but she's yet to make her return.

Balor wore down Styles with a pair of abdominal stretches at the beginning of the match before Styles responded with a modified backbreaker. But then, all hell broke loose on the outside as the factions brawled. Eventually, Styles joined the fray and tossed Dominik Mysterio over the barricade before he turned his attention back to Balor.

Balor connected with the first of several Sling Blades while Styles stormed back with a suplex into the corner. Balor attempted to end the match with Styles' signature maneuver, the Styles Clash, but Styles was able to reverse into a Calf Crusher. Before he could lock in the submission move, though, Balor broke free.

Styles connected with a Pele Kick anyway, while Balor returned fire with a Pele Kick of his own. Styles finally hit Balor with a Sling Blade, then attempted the 450 splash, but Balor evaded and capitalized with a shotgun dropkick to set up Styles for the Coup De Grace.

But Balor couldn't connect, and Styles tossed him in the Calf Crusher while he favored his injured leg.

They eventually exchanged strikes in the middle of the ring until Styles delivered the Phenomenal Forearm for the win.

What's next: This could finally be the end of the long-running program between The O.C. and The Judgement Day as WWE nears the end of the 2022 schedule.

Kai and Belair started it off before Sky entered the cage to give Damage CTRL the advantage. In order, Asuka entered, followed by Cross, Bliss, Bayley, Ripley and finally, the returning Lynch to officially kick off the match at five on five.

Bayley delivered the Rose Plant on Lynch on the steel that divides the ring, but Asuka was there to break up the pin.

Belair followed up with a powerbomb of Bayley before Iyo Sky delivered a moonsault from the top of the cage that took out Belair and Yim.

Cross attempted to handcuff her former tag-team partner, Bliss, to the cage, but Bliss was able to cuff herself to Cross instead. Bliss capitalized and delivered an electric chair drop on the trash can. Ripley, meanwhile, made her presence felt when she sent Yim crashing through a ladder that broke in half.

Lynch connected on a Manhandle Slam on Kai, while Belair hit the KOD on Sky. The former rivals laid Sky and Kai on a nearby table before Lynch scaled the cage.

Bayley intervened to take out Lynch, but Belair took out the Damage CTRL leader with a KOD into the cage wall, allowing Lynch to deliver a jaw-dropping senton through the table on Kai and Sky, and the pin on Kai for the win.

What's next: With one of WWE's top stars, Lynch, back in the fold, they can go in numerous directions. Now that she's a face, she won't be feuding with Belair, but perhaps they'll team up again shortly while Damage CTRL regroups.

Ranking the UFC 284 fights: There's no debating which fight is No. 1

Islam Makhachev-Alexander Volkanovski is the clear No. 1, but there are other great matchups to watch on Saturday night.
18 HOURS AGO
ESPN

UFC trans-Tasman Power Rankings: Who makes the top 10 in Oceania?

For a small corner of the world, Oceania has thrown up some serious UFC talent in recent times. Allow us to introduce our trans-Tasman top 10 as we continue the countdown to UFC 284.
11 HOURS AGO
ESPN

The Notorious is back: Breaking down Conor McGregor vs. Michael Chandler

McGregor and Chandler will serve as coaches in the upcoming season of "The Ultimate Fighter." Afterward, they'll step into the Octagon. We break it all down.
2 DAYS AGO
ESPN

Lightweight Kevin Lee, 30, told ESPN's Brett Okamoto on Monday that he has agreed to an exclusive deal with the UFC, a little more than one year after the promotion released him of his contract.
FLORIDA STATE・6 HOURS AGO