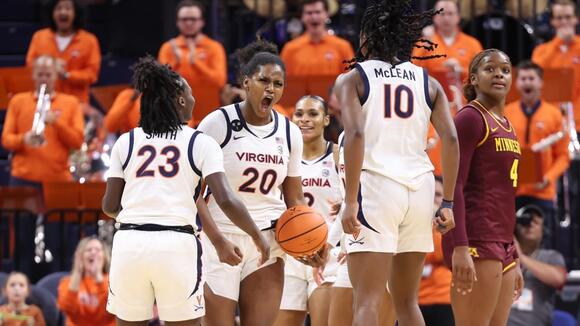 Some missed free throws in the last minute of regulation nearly cost the Cavaliers, but they came up with a couple of crucial steals and an offensive rebound to seal the win. The nail-biting sequence in the game's final seconds was a fitting end to a thrilling game that featured major scoring runs from both teams and a neck-and-neck fourth quarter.

In the end, Virginia escaped with a 73-70 win over Minnesota in the first game of the 36th Cavalier Classic on Saturday afternoon at John Paul Jones Arena to move to remain undefeated on the season.

Virginia struggled from the field throughout the first quarter, shooting 6/21 (28.6%). This allowed Minnesota to put together a 13-3 run to take a 15-6 lead with four minutes to go in the quarter. Playing a clean first quarter with only one turnover helped the Cavaliers overcome their shooting woes, as well as scoring ten of the team’s 13 points in the paint in the first quarter. Minnesota led 21-13 after the first ten minutes.

The Cavaliers quickly put the sluggish first quarter behind them to start the second, putting together an astonishing 18-0 run to completely turn the game around. There were five layups within the run and the scrappy Virginia defense forced nine Golden Gopher turnovers in the second quarter and scored 14 points off of them. Virginia's ability to go on runs like this means the Hoos will never be out of a game.

Midway through the third quarter, the Cavaliers were sitting at 1/17 (5.9%) from beyond the arc. After leading the ACC and being 18th in the country with 17.2 offensive rebounds per game coming into the weekend, the Cavaliers had just nine offensive rebounds at that point. The defining stat of the game at the time was Virginia's 18 points scored off of 18 Minnesota turnovers, compared to ten UVA turnovers and only four Minnesota points as a result.

Camryn Taylor continued her streak as a go-to option for the Cavaliers offensively. She had two layups to push the UVA lead to 47-39, with Mir McLean taking a charge in between the two possessions. Taylor scored ten points in the third quarter on 5/7 from the field to carry the Cavaliers, as the rest of the team was 3/13 from the field. Minnesota made two three pointers late in the third quarter to creep back, so the Cavaliers led 51-45 going into the final frame.

After the three point shooting drought that spanned three quarters, Sam Brunelle drilled back-to-back triples to give her team a 59-49 lead early in the fourth quarter. Mara Braun scored six straight points to bring Minnesota to a 59-55 deficit. Two of the points were off free throws from a technical foul, as things got chippy in the game. Taylor Valladay responded with a left-handed layup, but Minnesota continued the comeback with a 10-2 run and trailed just 61-59.

Off of a miss from Camryn Taylor, Mir McLean powered through a sea of maroon jerseys to get an offensive rebound, and then completed a three-point play. Next, Taylor Valladay found Camryn Taylor open for a layup to extend the lead to 66-59.

Freshman Mara Braun continued to come in clutch for Minnesota, finishing a three-point play of her own. Then, Alexia Smith, a transfer from Minnesota, drained a pullup jumper and Sam Brunelle buried her third three-pointer of the game. However, Braun would not be denied, and she hit a difficult layup and then buried a three pointer. Braun finished with a game-high 24 points for Minnesota, including an incredible 16 points in the fourth quarter alone. With 90 seconds remaining, UVA led 71-67.

Off of an offensive rebound, Katie Borowicz hit a clutch three pointer for Minnesota to cut the deficit to one, and then after a UVA missed layup, the Golden Gophers had a chance to win the game with 19 seconds remaining.

However, Camryn Taylor had other ideas. After continuously contributing on the offensive end, she came up big on the defensive end with a steal. While she missed both free throws, Kaydan Lawson was able to fight for the offensive rebound and force the ball off of a Minnesota player. Taylor Valladay then went 1/2 at the line, giving Virginia a two-point lead with four seconds left. As Minnesota rushed to dribble down the court, Kaydan Lawson picked up a steal, and then went 1/2 at the line and time expired right after, giving the Cavaliers the dramatic 73-70 win.

Camryn Taylor scored 22 points to lead Virginia and Sam Brunelle had 17 points and was 3/6 from three. Mir McLean recorded a double-double with 11 points and 15 rebounds.

After struggling with the rebounding margin early in the game, the Cavaliers used clutch rebounds to power second-chance points. Now, the Cavaliers are 7-0 for the first time since the 1992-1993 season in the first year under Coach Mox.

Virginia will face its second Cavalier Classic opponent tomorrow afternoon, when the Cavaliers take on East Carolina at 2pm back at JPJ.

The Cavaliers fell two spots to No. 8 after their seven-game winning streak was snapped in Saturday's loss at Virginia Tech
CHARLOTTESVILLE, VA・16 HOURS AGO
Cavaliers Now

The Cavaliers shot 27% from the floor and lost their sixth-straight game to the Pitt Panthers, who were previously winless in ACC play
CHARLOTTESVILLE, VA・1 DAY AGO
Cavaliers Now

The Hokies diced up the UVA defense and defeated the Cavaliers at Cassell Coliseum for the third-straight year
BLACKSBURG, VA・2 DAYS AGO