Klinsmann to call Queiroz and ‘calm things down’ after Iran dispute 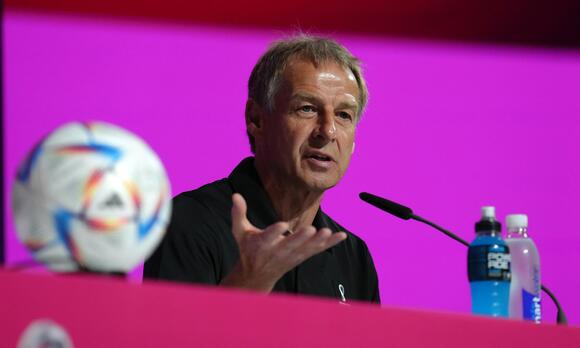 Jürgen Klinsmann has pledged to call Carlos Queiroz in an effort to smooth things over after his contentious comments on the Iran coach and his team.

After Friday’s 2-0 win over Wales , the BBC presenter Gabby Logan talked about Iran’s “gamesmanship” and said they just stayed on the right side of the law before handing over to Klinsmann. “Yes, that’s their culture,” he said. “Their way of doing it, and that is why Carlos Queiroz fits really well [with] the Iranian national team.”

The former Germany international added: “[Queiroz] struggled in South America, he failed to qualify with Colombia and then he failed with Egypt to qualify and then he went back and guided Iran, who he worked already with for a long, long time. So this is not by coincidence, this is done on purpose.

“This is just part of their culture and how they play, then they work the referee, you saw the bench always jumping up, working the fourth official and the linesman, constantly in their ears, constantly in your face. Kieffer Moore will probably tell you more after the game about little incidents that we didn’t see.” Queiroz demanded Klinsmann resign from his role on Fifa’s technical study group after calling his comments “a disgrace to football”.

“There was stuff really taken out of context,” Klinsmann said in an interview with BBC Breakfast on Sunday. “I will try to give him a call and calm things down.

“I have never criticised Carlos or the Iranian bench. Some even thought I was criticising the referee because he didn’t do anything about the way they were behaving on the bench. All I described was their emotional way of doing things, which is actually admirable in a certain way.

“The whole bench lives the game. They’re jumping up and down and Carlos is a very emotional coach, he’s constantly on the sidelines trying to give his players all his energy and direction.”

Queiroz was moved to respond to Klinsmann’s initial comments in a series of tweets on Saturday evening in which it was clear the Iran manager was furious. “No matter how much I can respect what you did inside the pitch, those remarks about Iran Culture, Iran National Team and my Players are a disgrace to football,” he said.

“Nobody can hurt our integrity if it is not at our level, of course. Even saying so, we would like to invite you as our guest, to come to our national team camp, socialise with Iran players and learn from them about the country, the people of Iran, the poets and art, the algebra, all the millennial Persian culture. And also listen from our players how much they love and respect football.

“As [an] American/German, we understand you’re no supporter. No problem. And despite your outrageous remarks on BBC trying to undermine our efforts, sacrifices and skills, we promise you that we will not produce any judgments regarding your culture, roots and background and that you will always be welcome to our family.”

Queiroz then called into question Klinsmann’s official role with Fifa. “At the same time, we just want to follow with full attention what will be the decision of Fifa regarding your position as a member of Qatar 2022 Technical Study Group. Because, obviously, we expect you to resign before you visit our camp.”

Iran’s players have faced huge pressure because of political unrest at home and face the USA in their final group game on Tuesday knowing a win will ensure qualification to the World Cup knockout stage for the first time in their history.

The former Israeli prime minister Naftali Bennett has said in an interview that Vladimir Putin told him he would not try to kill Volodymyr Zelenskiy, a promise made during a trip to Moscow shortly after Russia invaded Ukraine last year. Speaking on a podcast with the Israeli journalist Hanoch Daum,...
1 DAY AGO
The Guardian

"Hard power is a reality," US Army Gen. Christopher Cavoli said in January. "If the other guy shows up with a tank, you better have a tank."
1 DAY AGO
Business Insider

China's Foreign Ministry said the craft was a lost civilian balloon, the same explanation it gave for a suspected spy balloon that drifted over the US.
NORTH CAROLINA STATE・12 HOURS AGO
Deseret News

Igor Girkin predicted a "power struggle with unpredictable consequences" if Vladimir Putin died or stepped down as the Russian president.
11 HOURS AGO
CNN

Former CIA and FBI official Phil Mudd discusses whether the US overreacted to the suspected Chinese spy balloon that hovered over the nation for days before the US military shot it down.
1 DAY AGO
coinchapter.com

The US Government ordered the Pentagon to destroy the alleged Chinese spy balloon. The US Air Force shot down the balloon with a single missile as it drifted over the Atlantic Ocean. China hit back at the decision, threatening a strong retaliation. YEREVAN (CoinChapter.com) — Over the last few days,...
MONTANA STATE・1 DAY AGO
BBC

The sheer scale of the devastation of the earthquake and its aftershocks can be seen in social media photos and videos posted by people in Turkey and Syria. Eyewitnesses have also been speaking about what happened. BBC News has been pulling together and verifying information. The tremors of the main...
19 HOURS AGO
The Guardian

In an underfunded system, a killing a week is committed by former prisoners
2 DAYS AGO
RadarOnline

Vladimir Putin’s forces are starving in Ukraine and are forced to survive on only potatoes, onions and instant noodles cooked using the back ends of rockets, RadarOnline.com has learned.In a surprising development to come as Russia’s death toll recently surpassed 500,000, one Russian soldier spoke out to reveal the Russian military’s food situation has not changed even 12 months after first invading Ukraine in February 2022.Even more shocking was recently released footage of a Russian battlefield kitchen that indicated Putin’s soldiers are struggling to survive as their options for food and nutrients are severely limited.That is the revelation shared by...
19 HOURS AGO
RadarOnline

Pro-Putin Musician, Who Waved Dead Ukrainian's Skull Around On Stage, Shot In The Head In Suspected 'Revenge Hit'

A pro-Putin musician, who once waved a dead Ukrainian’s skull around on stage, was shot in the head in what is suspected to be a “revenge hit” for his anti-Ukrainian behavior, RadarOnline.com has learned.Igor Mangushev, 36, is currently in the hospital recovering from his near-fatal injuries.He was reportedly shot in the head on the night of February 3 while fighting in Ukraine under Vladimir Putin’s mercenary chief, Yevgeny Prigozhin.According to Daily Star, the attack against Mangushev came roughly six months after the Russian musician-turned-mercenary waved the Ukrainian skull on stage during a concert in August.“We’re alive and this guy is...
15 HOURS AGO
Business Insider

Bill Clark/CQ-Roll Call via Getty Images ABC anchor Jonathan Karl called out Sen. Marco Rubio during a tense exchange on Sunday about the Chinese spy balloon. During Rubio's appearance on ABC's "This Week," the Florida senator was asked if President Joe Biden should have acted against the military's advice and shot the suspected spy balloon down over the US mainland. The balloon was spotted floating over Montana, near a nuclear missile base. Rubio conceded that falling debris from the balloon "could hurt, harm, or kill people." But the senator also hit out at Biden for what he said was weakness in the face of China's provocations.
FLORIDA STATE・1 DAY AGO
The Guardian

Yes, the mood has shifted against Brexit. But the road back to Brussels is long and hard

Three years on, the reality of the split with the EU has changed minds. But dashed hopes could come to haunt Labour, too
2 DAYS AGO
The Guardian

There is no joy in it for those who always knew Brexit was a con, but it is finally dawning on more and more people that leaving the EU was a colossal mistake. Those who led the project still talk the same old nonsense about the purported benefits of Brexit, but they, like most government assertions these days, sound like echoes of a bygone time.
1 DAY AGO
The Guardian

If the worst happens, Taras, 23, Vladyslav, 21, and their commander, Olexiy, 39, are well aware that the Ukrainian government will deny any knowledge of them. In western capitals, there is a collective shudder at the very thought of them. They are members of the Bratstvo battalion, a volunteer group...
2 DAYS AGO
The Guardian

People living in north-west Syria are used to being woken up at night by collapsing buildings. Often, the destruction is accompanied by the sound of jets flying overhead as Bashar al-Assad and his Russian allies drop bombs on schools, hospitals and other civilian infrastructure. Caught between the Damascus regime and...
16 HOURS AGO
The Guardian

Hundreds of people have been killed as they slept in Turkey and Syria after a 7.8 magnitude earthquake hit in the early hours of Monday morning, in one of the most powerful quakes in the region in at least a century. Thousands more were injured as the quake wiped out...
1 DAY AGO
The Guardian