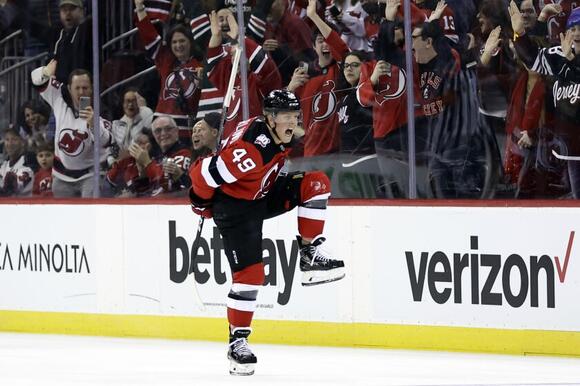 Ruff became the fifth NHL coach to reach the mark. The former Buffalo player won 571 games with the Sabres from 1997-2011. He had 165 wins in five seasons with Dallas and has 64 in two-plus seasons with New Jersey.

The Atlantic Division-leading Devils have won two in a row after having its franchise-record 13-game winning streak snapped by Toronto.

John Carlson scored for Washington and Charlie Lindgren made 24 saves.

Jack Campbell made 20 saves, defenseman Evan Bouchard scored twice and Dylan Holloway had his first NHL goal in the comeback.

After Rangers forward Alexis Lafreniere took a roughing penalty with 2:26 to go, Draisaitl finished the outburst with his 12th goal of the season.

Andrew Cogliano and Dryden Hunt also scored for the Avalanche, and Manson added an assist.

Colorado was called for five minor penalties in the second period, but was able to kill off four of them. Joe Pavelski got the lone power-play goal for Dallas.

The teams will complete the home-and-home set in Philadelphia on Tuesday night.

Zach Parise scored twice for the Islanders and Adam Pelech also scored to help New York improve to 8-3-0 at home.

Lukas Sedlak and Joel Farabee scored for Philadelphia. The injury-depleted Flyers are 0-7-3 in their last 10 contests and haven’t won since Nov. 8.

PITTSBURGH (AP) — Mitch Marner extended his points streak to 16 games with a goal and an assist and Toronto beat Pittsburgh.

Auston Matthews became the seventh player in team history with 200 even-strength goals and William Nylander and Pontus Holmberg also scored for the Maple Leafs. They have points in eight straight and 14 of last 16.

Erik Kallgren made 25 saves. Toronto has won three straight games and nine of its last 13 overall. The Maple Leafs are 5-0 on the road in November.

Rickard Rakell scored for Pittsburgh. The Penguins had won five in a row.

Vancouver won its second straight on a three-game trip that ends Sunday in San Jose. The Canucks have won four of five after a three-game skid.

Vegas lost for the second time in two nights after losing for the first time ever to Seattle on Friday.

SUNRISE, Fla. (AP) — Jordan Kyrou scored his second goal of the game at 1:08 of overtime to lift St. Louis past Florida.

St. Louis overcame a three-goal deficit in the third period, tying it on Vladimir Tarasenko’s goal with 3:49 left. Brandon Saad and Ryan O’Reilly also scored and Thomas Greiss made 33 saves.

Aaron Ekblad, Radko Gudas and Carter Verhaeghe scored for Florida in the first period and Anton Lundell made it 4-1 in the second.

RALEIGH, N.C. (AP) — Brett Pesce broke a third-period tie with his first goal of the season and Carolina beat Calgary to end a five-game winless streak.

Seth Jarvis and Martin Necas also scored for Carolina. Antti Raanta made 19 saves in his first action in five games. He dealt with an injury earlier in the week and was scratched from a scheduled start Wednesday night.

Cam Thomas scored a career-high 44 points off the bench and the short-handed Brooklyn Nets rallied from a 23-point deficit to stun the Washington Wizards 125-123
WASHINGTON, DC・7 HOURS AGO
San Diego Union-Tribune

The NBA has suspended Orlando's Mo Bamba for four games and Minnesota's Austin Rivers for three games for their roles in an on-court altercation on Friday night
ORLANDO, FL・7 HOURS AGO
San Diego Union-Tribune

N'Faly Dante scored 14 of his 18 points in the second half, Keeshawn Barthelemy scored added 15 points and Oregon blew most of a 12-point lead before the Ducks beat Arizona State 75-70
TEMPE, AZ・5 HOURS AGO
San Diego Union-Tribune