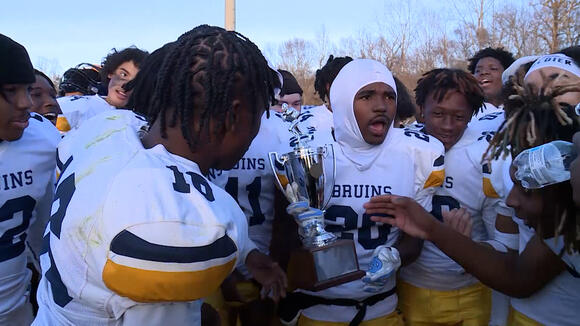 MIDLOTHIAN (WAVY) – For the first time in 21 years, Western Branch can lay claim to a region championship in football.

Saturday in Midlothian, the Bruins (11-2) held on to defeat Manchester on the Lancers home field, 21-14.

Future North Carolina Tar Heel Paul Billups Jr. got the scoring started for Western Branch when he took a direct snap and scored to put the Bruins up 7-0.

On its ensuing drive, Western Branch strikes again, this time when Taquan Trotman connected with Billups for his second touchdown of the game.

Shamique Blizzard added a touchdown to put Western Branch up 21-14 at the half.

In the fourth quarter, perhaps the play of the game when Steve Trotman intercepted a Manchester pass in the end zone, helping secure the Bruins first region title in more than two decades.

“We’re one Bruin,” head coach Rashad Cook said. “We all did it together as one. One team, one staff, one program. It’s just another barrier knocked down at Western Branch High School.”

For the latest news, weather, sports, and streaming video, head to WAVY.com.

It took every second for the Pirates to earn their second CAA win of the season.
HAMPTON, VA・1 DAY AGO
WAVY News 10

(Courtesy: Harry Minium/ODU Sports) NORFOLK, Va. – Not even Old Dominion’s considerable home-court advantage at Chartway Arena could bail the women’s basketball team out on a night when they shot poorly and appeared to be out of sync.  Texas State shook off a slow start and rallied to defeat ODU, 52-46, Thursday night to hand the Monarchs […]
SAN MARCOS, TX・1 DAY AGO
WAVY News 10

Old Dominion men's basketball coach Jeff Jones said the key for his team to building momentum toward a run up the Sun Belt Conference standings will be winning its next game, and then building off of that. The Monarchs play on the road Friday at South Alabama and Saturday at Coastal Carolina.
NORFOLK, VA・1 DAY AGO
WAVY News 10

"It does allow a competitive advantage for some properties to still have that as an amenity for their guests, and we're seeing that all over the country."
PORTSMOUTH, VA・1 DAY AGO
WAVY News 10

HAMPTON, Va. (WAVY) – The Hampton Division of Fire & Rescue responded to a residential structure fire in the 2100 block of Laguard Drive Friday evening. Hampton dispatch said the call came in at 9:08 p.m., and multiple units responded to the scene, finding flames showing. All occupants were...
HAMPTON, VA・22 HOURS AGO
WAVY News 10

This popular festival has brought some of the best jazz, pop, blues, soul and R&B artists for the last 50 years and will take place at the Hampton Coliseum.
HAMPTON, VA・2 DAYS AGO
WAVY News 10

Not just blowing smoke: Risks highlighted by exposure in casinos

Newport News Public Schools Superintendent Dr. George Parker is walking away with $502,115.14 in severance - an amount that equals two times his salary and will be paid out equally over the next 12 months. As of Feb. 1, Parker is officially relieved of his duties. Former NNPS superintendent gets...
NEWPORT NEWS, VA・1 DAY AGO
WAVY News 10

Invasive species to deforestation: Virginia evaluates the state of the forest for 2022

Virginia's trees play a major role in benefiting our overall health by protecting the water supply and purifying the air. Because of this, the Virginia Department of Forestry evaluates the "State of the Forest" each year.
VIRGINIA STATE・1 DAY AGO
WAVY News 10

According to police, the call for the shooting came in around 8:03 p.m. in the 500 block of Spring Lake Crescent. Police say there is one victim who is believed the have non life-threatening injuries.
VIRGINIA BEACH, VA・1 DAY AGO
WAVY News 10

According to a press release, Marines from the 2nd Battalion 2nd Marine Regiment and Sailors with the USS Gunston Hall will take part in this exercise.
NORFOLK, VA・1 DAY AGO
WAVY News 10

According to dispatch, a report of a shooting came in around 11:26 a.m. in the 100 block of Nicholson St.
PORTSMOUTH, VA・2 DAYS AGO
WAVY News 10

According to a Facebook post, the N.S.A Hampton Roads Portsmouth Annex will be under construction from January 30 through July 30.
PORTSMOUTH, VA・2 DAYS AGO