‘In Gloucester, young boys are carrying weapons’: how violence, drugs and abuse thrive when police fail 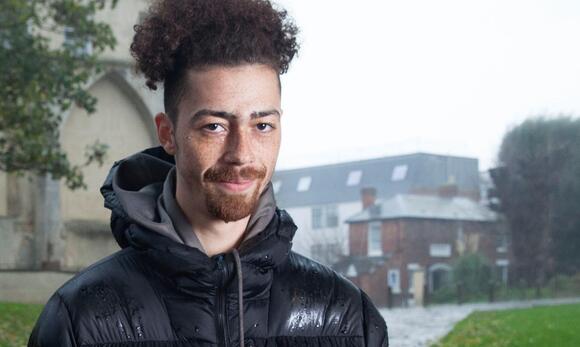 Gloucester’s most notorious open-air drug-dealing territory is known as “the ruins”. Close to the shadow of the city’s famous cathedral, the ruins in question refer to the blackened remains of an early Tudor friary church. Alongside lies a patch of green where county lines drug networks and Gloucester’s gangs operate.

A downpour on Thursday afternoon cleared the area temporarily, but Jasper Taitt-Williams knew the reprieve would be brief. “Everyone thinks it is historical and beautiful, but Gloucester has a serious problem with violence.”

Taitt-Williams should know. A three-inch line of smooth scar tissue follows his jawline – the legacy of a fight when he was punched by a man with three blades concealed in his fist.

Two of his friends are dead, murdered. “I’ve lost track of how many have been stabbed. Countless.” Few went to the police. Like many in Gloucester, Taitt-Williams remains unconvinced about the local force’s ability to deliver justice.

The latest assessment by the inspectorate of constabulary corroborates such qualms, with Gloucestershire Constabulary placed in special measures after being ranked among the worst-performing forces in England and Wales.

Its failings include being judged inadequate at investigating crime, one of policing’s basic functions. Similarly, concerns with protecting vulnerable people were identified.

Taitt-Williams agrees, believing that too many of the city’s children are drawn into “road life” – roaming the streets, dabbling in drug dealing, dispensing violence. Earlier this month, Gloucester was the backdrop for a film focused on gangs , vulnerability and knife crime.

“It’s so easy to get sucked in to. Kids see people with money; they’re so easily exploited so young,” said Taitt-Williams.

Gloucester has the county’s highest rate of crime, the streets surrounding the ruins witnessing the highest levels. Reports label the centre as the 20th most dangerous neighbourhood in England and Wales.

You’ve got young, not very worldly boys carrying weapons. That definitely keeps me awake at night

Data, though, fails to articulate the trauma behind each figure. “A friend was slashed across the stomach. I can still see his guts spilling out, trying to push them back in. Another was stabbed in the neck. His eyes rolled back,” said Taitt-Williams, shaking his head as he relives the image.

A post-pandemic surge in mental health-related incidents is, says Ocone, partly to blame for tying up pressured resources.

“The three things policing normally gets involved with are the prevention and detection of crime, keeping the peace and saving life. We probably spend a disproportionate amount of time in the last area rather than the first. That really pains me, to be honest.

“If my mum asks: ‘What do the police do?’ the answer is that we investigate crime, don’t we?”

In its assessment by the inspectorate, published in October 2021, the force was also admonished for deficiencies in tackling domestic abuse, with 77% of cases closed due to problems with evidence or victims withdrawing support for prosecutions.

Two miles up the A38 lies the nondescript office block whose occupants deal with the fallout of such failings. Inside, Heather Downer of the Gloucestershire Domestic Abuse Support Service quickly points out that the inspectorate’s report “really wasn’t great at all” but says the police have a “real appetite” to improve. As she speaks, her team moves briskly within a maze of meeting rooms. Staff are busy dealing with 9,000 annual referrals from remote farming hamlets, affluent commuter villages and Gloucester’s sprawling estates. Of these, 900 are classified as presenting a real threat to life.

Downer’s staff meet police daily, reviewing each domestic abuse incident reported during the previous 24 hours, underlining what she describes as an increasingly close working relationship between the two.

“There needs to be continual learning by Gloucestershire police and real ownership in the way its officers deal with domestic abuse,” she said.

Ultimately, Downer accepts that policing is not the solution. “You need to teach people from an early age. We should be in a position where we’re making investments into preventing this in the first place.”

Ocone, a former regional police lead for domestic abuse, appreciates the importance of processing such cases diligently to avert the risk of victims “disengaging”.

Even so, the inspectorate concluded that victims of domestic abuse and behavioural crimes do not receive the service “they have a right to expect”. In some instances offences were not even recorded.

During the 13 months since the inspectorate published its assessment of how Gloucestershire’s 1,260 officers responded to its 600,000 residents, the force has revolutionised the recording of crimes, particularly for notoriously complex offences such as coercive control. “You’re effectively investigating somebody’s lifestyle,” said Ocone.

The changes have prompted a dramatic increase in the volume of crimes recorded in Gloucestershire. Last year 39,000 offences were registered. Already, the figure for 2022 stands at 52,000.

It’s scary how many kids carry weapons. One of my little brother’s friends had a weapon on him – he was 13

Back at the ruins, Taitt-Williams is mulling over the state of policing in Gloucester. “It should be more about prevention, protection. They only seem to get involved when something major happens.”

Something very major happened almost a year ago, a murder whose brutality continues to cast a cloud over the city.

The murder of Ramarni Crosby, 16 , less than a mile away from the Tudor ruins was followed by several other stabbings. Taitt-Williams felt tensions rising on the roads.

At the start of the year, he set up Put The Knives Down Gloucester (PTKDG) with friends, seizing 200 weapons within three months and handing them anonymously to police.

“Kids are carrying weapons to protect themselves. It’s scary how many carry them. One of my little brother’s friends had a weapon on him – he was 13. When asked why, he said it was because everyone carries them.”

Despite its success, funding requests for PTKDG have been turned down. A series of well-received school workshops on street violence have been cancelled.

“The tougher the area the more that pupils responded,” said Taitt-Williams, who left gang life three years ago but fears Gloucester is becoming more inured to violence.

Ocone concedes that the issue impairs his sleep. “It’s a real problem and incredibly high risk. You’ve got young, not very worldly boys carrying weapons. That’s one of the areas that definitely keeps me awake at night.

“With young people we really try to treat them with care. It’s very difficult to use some of our classic tactics like stop and search, but there’s lots of early intervention work going on now in Gloucester.”

Crime rarely stops. At 12.57pm on Thursday a Gloucester resident witnessed a pensioner being “accosted” by four teenage boys outside the Kings Walk shopping centre.

“The kids have no respect, no fear. They’ll attack anyone,” said the 60-year-old after describing the incident to a security guard.

Ocone is confident of the progress being made, citing an ambition for the force to climb out of special measures next year. This week officers will travel to London to update the inspectorate of constabulary on “really strong progress in a number of areas”.

At the ruins, the rain easing, Taitt-Williams says that the prevention of crime prevents a lifetime of trauma for victims. “PTSD and anxiety affect young people, shape them,” he says. “We need new alternatives, new ways of creating hope.”

Harrowing footage thought to show Wagner group fighters beating commander with what appear to be shovelsWarning: video contains footage that some viewers may find distressing
2 HOURS AGO
The Guardian

In an underfunded system, a killing a week is committed by former prisoners
2 DAYS AGO
The Guardian

If the worst happens, Taras, 23, Vladyslav, 21, and their commander, Olexiy, 39, are well aware that the Ukrainian government will deny any knowledge of them. In western capitals, there is a collective shudder at the very thought of them. They are members of the Bratstvo battalion, a volunteer group...
3 DAYS AGO
The Guardian

People living in north-west Syria are used to being woken up at night by collapsing buildings. Often, the destruction is accompanied by the sound of jets flying overhead as Bashar al-Assad and his Russian allies drop bombs on schools, hospitals and other civilian infrastructure. Caught between the Damascus regime and...
22 HOURS AGO
The Guardian

Earthquake in Turkey and Syria kills thousands and devastates cities

The former Israeli prime minister Naftali Bennett has said in an interview that Vladimir Putin told him he would not try to kill Volodymyr Zelenskiy, a promise made during a trip to Moscow shortly after Russia invaded Ukraine last year. Speaking on a podcast with the Israeli journalist Hanoch Daum,...
2 DAYS AGO
The Guardian

There is no joy in it for those who always knew Brexit was a con, but it is finally dawning on more and more people that leaving the EU was a colossal mistake. Those who led the project still talk the same old nonsense about the purported benefits of Brexit, but they, like most government assertions these days, sound like echoes of a bygone time.
2 DAYS AGO
The Guardian

A mask of unadorned misery: how Ben Affleck became the world’s biggest meme

In pictures from the Grammys, the superstar once again looks exhausted and overwhelmed. His expression speaks for us all
21 HOURS AGO
The Guardian

David Carrick, who used his position as a Metropolitan police officer to wage a 17-year campaign of terror and attacks against women, has been jailed for life. The 48-year-old was sentenced to life and must serve a minimum term of 32 years minus the time he has spent in custody before he can even be considered for release.
2 HOURS AGO
The Guardian

Freight train cars continued to burn on Saturday, sending up heavy smoke, following a derailment that prompted an evacuation order and a declaration of a state of emergency in an Ohio village near the Pennsylvania state line in the US. About 50 cars derailed in East Palestine at about 9pm...
EAST PALESTINE, OH・2 DAYS AGO
The Guardian

Colleagues describe Emma Pattison as ‘inspiring’, as reports say shots were heard before bodies found in grounds of Epsom College
1 DAY AGO
The Guardian

From ‘hi mum’ to crypto fraud: five of the latest scams to watch out for

Australians are losing millions of dollars a week to increasingly common swindles. How can you avoid them?
2 DAYS AGO
The Guardian

The Vatican has expelled two cloistered sisters from the nunhood after the pair disobeyed a request to leave a seven-centuries-old monastery along Italy’s Amalfi coast. Known in the clifftop town of Ravello as “the rebel nuns”, Massimiliana Panza and Angela Maria Punnackal left the Santa Chiara monastery on Saturday after receiving a letter signed by Pope Francis telling them they were being relieved of “the obligations of sacred ordination”.
22 HOURS AGO