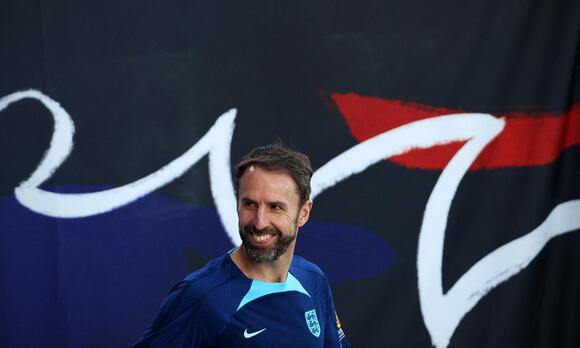 At times like these, you really have to hand it to Gareth Southgate. Suffocating tension, an underwhelming performance, the fans booing and he remains inscrutable, immaculate, not a bead on him.

When you have lived what Southgate has lived – two World Cups as an England player, now into his second as the manager – it is easier to put a game like Friday night’s slog against the USA into perspective, to blot out the noise.

As Southgate reflected on the 0-0 draw , which was marked from an England point of view by a lack of zip and risk, he made a comment that was perfectly in keeping with his outlook but at the same time seemed to hint at something deeper. “I have come here to enjoy this tournament as much as I can,” he said.

It had an end-of-days feel to it. Devil-may-care vibes, feeding the suspicion that this World Cup could be his last dance with England, despite being under contract until December 2024.

What Southgate absolutely wanted to make clear was his tranquility with the USA result. That, and his continued readiness to take whatever hits are being dished out, to act as a shield for his players, to project a confidence on to them – much in the manner of the former Arsenal manager Arsène Wenger.

It is possible to see the similarities between Southgate and the old martyr of north London. There is the intelligent way he engages on the social issues of the day but, especially when it comes to man-management, that element of stoicism, the tunnel vision.

“When you have had as much flak as me, you are not really bothered about having a bit more,” he said. “I know what the noise will be. This is a tournament like no other for noise and we have got to make sure we stay really calm.

“I am lucky. I am locked away in a hotel with no telly on. It is a deliberate disengagement. Because if I listen to everything, I either go bonkers or you start to doubt yourself. I am clear on how we need to be and on decisions we need to make. We won’t get every single decision right and so if there is criticism of certain calls, then so be it.

“I want to make sure that my enjoyment of this tournament is emitted to the players because that gives us the best possible chance of doing well. I love the group of players we have got here.”

Southgate embraced another classic Wenger-ism – the art of persuasive speaking, making his audience question what their eyes have just seen. To most observers, the display against USA was not good enough and the criticisms – no freedom, no adventure; everything too slow and sideways – have been recurring themes when things have not worked during Southgate’s tenure.

The 6-2 drubbing of Iran has been England’s only win in eight, taking in the turgid Nations League campaign. Southgate has tried to explain away what happened in that competition, painting it as a freak period because of circumstances. What if Iran was the outlier?

Southgate will have none of that and he came at the situation with glass half full. England have virtually qualified for the last 16 – it would take a heavy defeat against Wales on Tuesday to derail them – and, with control in their hands, they remain the favourites to top the group.

Remember the 0-0 with Scotland in the second game at Euro 2020, after England had won their opener against Croatia ? There had been plenty of hand-wringing back then and things went pretty well thereafter. Southgate stressed how important it had been not to lose to Scotland, to hold the point they had in the closing stages and it was the same against the USA.

Southgate also wanted to highlight the plus point of the defending, especially by Harry Maguire, and there was delight for the manager at the clean sheet, which he sees as the basis for a successful campaign. If he had been almost disproportionately angry at the concessions against Iran, he went the other way over how his team had kept out the USA. England recorded 14 clean sheets in 2021 but had two for the calendar year going into Friday night. They needed another one badly.

Bumps in the road are a part of tournament football and it is worth considering how the past four World Cup winners dropped points at the group stage. Italy had a horrible draw against a USA team that played with nine men from the 47th minute in 2006. Spain lost their opening match to Switzerland in 2010. Germany were poor when drawing against Ghana in 2014. France were toothless in the stalemate with Denmark in 2018.

It normally takes all three games to qualify. That England managed it after two at the last World Cup and then the Euros was unusual.

“At the 1998 World Cup as a player, I remember when we beat Tunisia and then lost to Romania, I said that if anybody thinks we can’t beat Colombia [in the final group tie], then what are we doing?” Southgate said.

“You have to go three games. We are going to go to knockout games eventually so you have got to be able to handle those moments.”

Southgate felt England showed a different side to their personality against the USA and it is a truism that a manager can learn more about his team in adversity than when they are, say, banging in six goals. He is confident of a reaction against Wales.

My ancestors were pillaged to bring the Benin bronzes to England. It is white supremacy that keeps them here

This month marks 126 years since the British punitive expedition resulted in the theft of more than 10,000 objects from the Benin kingdom. They came to be known as the Benin bronzes, and have been at the centre of repatriation debates ever since. Though the original victims are long gone,...
14 HOURS AGO
The Guardian

Rishi Sunak has taken private helicopter trips to his constituency in North Yorkshire costing thousands of pounds since he became prime minister, the Guardian understands. The commute to Richmond from a London heliport is likely to raise further questions about the prime minister’s commitment to tackling the climate crisis.
6 HOURS AGO
The Guardian

Chelsea won 3-2 thanks to goals from Jess Carter, Lauren James and Guro Reiten, while Tottenham, despite their promise, seemed strangely unsure of themselves
12 HOURS AGO
The Guardian

The death of a young YouTube star at the hands of her father has sparked outrage in Iraq, as so-called “honour” killings continue in the conservative country. Tiba al-Ali, 22, was killed by her father on 31 January in the southern province of Diwaniya, interior ministry spokesperson Saad Maan said on Twitter on Friday.
2 DAYS AGO
The Guardian

Every week we wrap up the must-reads from our coverage of the Ukraine war, from news and features to analysis, visual guides and opinion. Kyiv’s forces are preparing for the war’s most intense phase, world affairs editor Julian Borger reported from the Ukrainian town of Huliaipole 60 miles (100km) east of Zaporizhzhia city.
2 DAYS AGO
The Guardian

There is no joy in it for those who always knew Brexit was a con, but it is finally dawning on more and more people that leaving the EU was a colossal mistake. Those who led the project still talk the same old nonsense about the purported benefits of Brexit, but they, like most government assertions these days, sound like echoes of a bygone time.
14 HOURS AGO
The Guardian

New York prosecutors building a case against Donald Trump for allegedly lying about his wealth for tax purposes had to show the former president was “not legally insane”, one of those prosecutors reportedly writes in an eagerly awaited new book. The lawyer, Mark Pomerantz, also reportedly compares Trump,...
2 DAYS AGO
The Guardian

Freight train cars continued to burn on Saturday, sending up heavy smoke, following a derailment that prompted an evacuation order and a declaration of a state of emergency in an Ohio village near the Pennsylvania state line in the US. About 50 cars derailed in East Palestine at about 9pm...
EAST PALESTINE, OH・1 DAY AGO
The Guardian

Coles and Woolworths ordered to dump more than 5,200 tonnes of recycled soft plastic in landfill

Supermarket giants Coles and Woolworths have been ordered to dump more than 5,200 tonnes of soft plastic – currently being stored at warehouses across New South Wales – into landfill. The NSW Environment Protection Authority is concerned that huge amounts of soft plastic are being dangerously stored at...
2 DAYS AGO