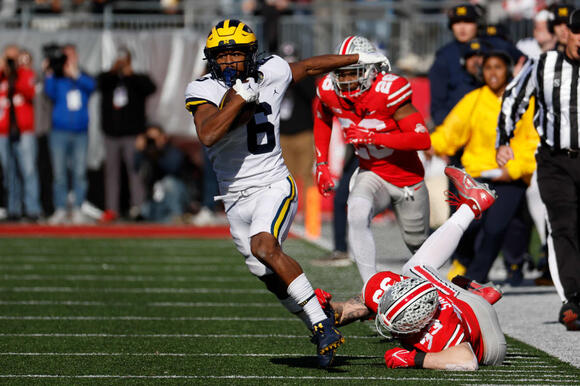 Ohio State welcomed Michigan back to Columbus for a winner-take-all battle at Ohio Stadium, but the “revenge game” this was billed as turned out to be heartbreaker for Buckeye Nation.

The Wolverines outmatched the Buckeyes this afternoon with a quick strike offense and balance that were difficult for Ohio State to match. The game opened up as a shootout early, which looked to favor Ohio State, but as the battle continued into the second half, Michigan began to slow the pace of play and forcing the Buckeyes into mental mistakes and penalties that put the team behind-the-sticks. The limited possessions of the third quarter allowed the Wolverines to establish a ground attack that struggled to get going in the first half, and the Wolverines took a 24-20 lead into the fourth quarter, which they wouldn't relinquish.

Ohio State had opportunities to come back into the game late, as Jake Moody missed a 57-yard field goal attempt that gave the offense a short field to work with midway through the fourth, but the Buckeyes were unable to finish drives in the pivotal moments down the stretch. Donovan Edwards put the nail in the coffin for Ohio State with two late touchdown runs of 75 and 85 yards.

Michigan now sets its sights on the Big Ten Championship game, while the Buckeyes await their postseason fate.

Get your Ohio State football tickets from SI Tickets . Also, be sure to check out our new message boards, Buckeye Forums . We'd love to have you part of the conversation during the season.

Game Prediction: No. 2 Ohio State Buckeyes Vs. No. 3 Michigan Wolverines