What's the future of the Chesapeake Walmart building? 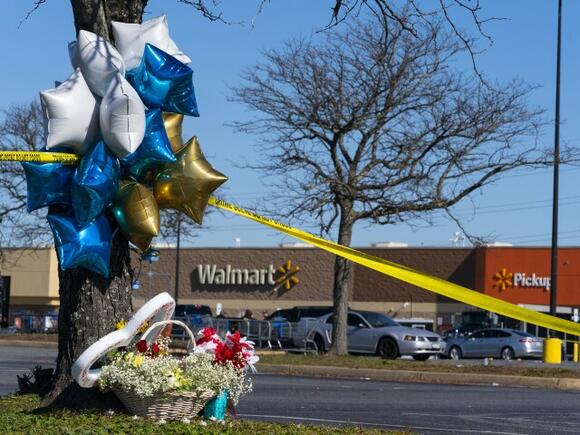 The City of Chesapeake on Saturday said the city's police department's forensic unit and the FBI have completed their crime scene investigation at the Walmart on Sam's Circle, where six people died after a man opened fire on Tuesday night before turning the gun on himself. Several others were also injured.

In a tweet, the city said control of the store will be returned to Walmart. Walmart will be responsible for deciding what comes next for the location.

On Saturday, Walmart released the following statement to News 3.

We’ll continue focusing our attention on offering support to our associates, families and loved ones in every way possible. We will work very closely with our associates and rely on their input to determine the best time to reopen the store.

Many are still mourning as they visit a growing makeshift memorial outside of the Walmart store.

"A horrific incident has happened," said a longtime resident, Kecia Brothers-Hayes. "Never did I ever think something like this would hit so close. This is like minutes away from my home. This is a place where we shop at probably every two weeks."

On Saturday, crime scene tape could still be seen around the store, but some questioned even the thought of the store's doors reopening.

"I think this is too soon to even have this on the table for consideration," Brothers-Hayes said.

Timothy Douglas told News 3 his works at the Sam's Circle Walmart location. Douglas said he would continue to shop at that store.

"It wouldn't bother me, and I'm not being insensitive to the situation, but it's going to take time," he said.

But the pain of this incident still lingers.

"I mean these were innocent victims working hard for Walmart," said Brothers-Hayes.

On Friday, the city said it would hold a special meeting Monday "in Council Chambers to confirm the Emergency Declaration, which will free up funding to support recovery following the Walmart shooting. No other matters will be discussed."

The meeting starts at 5 p.m.

Later that evening, at 6 p.m. there will be a candlelight vigil at City Park to honor the six victims.

Man killed in shooting on Riverlands Drive in Newport News

Police in Newport News are investigating after a man died following a shooting Thursday evening. In a press release, police said it happened just before 5:40 p.m. on Riverlands Drive.
NEWPORT NEWS, VA・18 HOURS AGO
WTKR News 3

Child in Richneck Elem. shooting did not have proper services, advocates say

A Central Virginia special education advocate said it would be "highly inappropriate" for a parent to attend school daily with their special needs child.
NEWPORT NEWS, VA・14 HOURS AGO
WTKR News 3

A Portsmouth family is traumatized after a hidden camera was found in their bathroom and then a fire broke out at their house when they weren't home, according to their attorney.
PORTSMOUTH, VA・1 DAY AGO
WTKR News 3

Uvalde Foundation For Kids said it is working with Newport News school staff and parents as Richneck Elementary prepares to open its doors.
NEWPORT NEWS, VA・19 HOURS AGO
WTKR News 3

The police chase spanned from Greenbrier Parkway to I-64 towards Virginia Beach and Indian River Road to Norfolk
CHESAPEAKE, VA・2 DAYS AGO
WTKR News 3

Should there be red light cameras near HRBT in Hampton?

If the ordinance passes, traffic lights would replace the officers in monitoring the closure. The vote is happening on Wednesday, Jan. 25
HAMPTON, VA・2 DAYS AGO
WTKR News 3

Around 9:45 a.m. on Wednesday police responded to the 5000 block of Olive Drive for reports of a body in a retention pond.
WILLIAMSBURG, VA・1 DAY AGO
WTKR News 3

Police are on scene of a shooting in the 700 block of Fallon Court. A man was found dead at the scene, according to police.
HAMPTON, VA・1 DAY AGO
WTKR News 3

New 'Sober Bar' in Portsmouth putting a twist on nightlife

Many are deciding to pass on alcoholic drinks this month, taking part in what’s called "Dry January," and there’s a new business in Portsmouth for those who are participating.
PORTSMOUTH, VA・1 DAY AGO
WTKR News 3

Parents are weighing in on what they want to see in the next superintendent for Newport News Public Schools. It comes after the school board voted to fire Dr. George Parker III.
NEWPORT NEWS, VA・16 HOURS AGO
WTKR News 3

The Coast Guard will consider evidence related to the fire and total constructive loss of the passenger vessel Spirit of Norfolk.
VIRGINIA BEACH, VA・1 DAY AGO
WTKR News 3

On Thursday, police in Opelika announced that they identified the girl as Amore Joveah Wiggins, from Norfolk, and arrested her father as a suspect in her death.
OPELIKA, AL・3 DAYS AGO
WTKR News 3

Virginia Beach calls it "one of the most desirable plots of undeveloped land on the eastern seaboard." There are only days left to give input on four development options for Rudee Loop.
VIRGINIA BEACH, VA・1 DAY AGO
WTKR News 3

Michael Rusk, a 24-year-old James City County police officer, has been arrested for shooting a fellow officer while off-duty in Williamsburg, according to police.
WILLIAMSBURG, VA・2 DAYS AGO
WTKR News 3

A News 3 Investigation has been looking into waste, fraud, and abuse in government agencies and tracked down a former state employee who said he was very remorseful for his decisions.
VIRGINIA STATE・1 DAY AGO
WTKR News 3

A 21-year-old was killed in a shooting in Virginia Beach early Monday morning, police said in a release Tuesday night. Just before 3:50 a.m., officers were called to a shooting at an unknown address.
VIRGINIA BEACH, VA・2 DAYS AGO
WTKR News 3

Hampton is proposing red light cameras along Mallory Street and Settlers Landing Road in an attempt to reduce congestion on residential streets that feed into I-64.
HAMPTON, VA・2 DAYS AGO