People Shared The Worst Movie Roles Good Actors Ever Did, And It's, Uhhh, Controversial 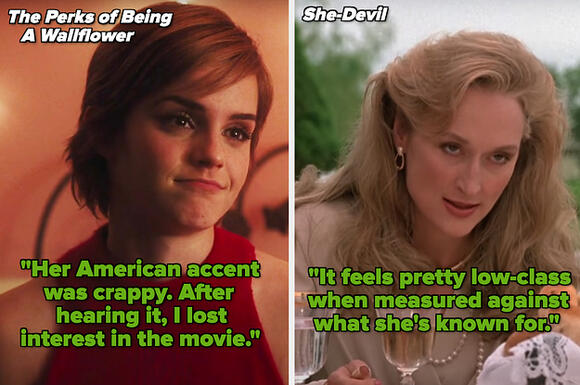 We asked the members of the BuzzFeed Community to tell us which great actors took terrible roles. Here's what they had to say:

2. Jeremy Renner and Gabrielle Union as Ned and Rachael in Neo Ned (2005)

6. Emma Watson as Sam Button in The Perks of Being a Wallflower (2012)

11. Channing Tatum, Mila Kunis, Eddie Redmayne, and every other actor in Jupiter Ascending (2015)

14. Kristen Stewart as Bella Swan in the Twilight movies

16. Scarlett Johansson as Francesca Curtis in The Perfect Score (2004)

23. Saoirse Ronan as Melanie Stryder/Wanderer, aka Wanda in The Host (2013)

Submissions have been edited for length and/or clarify.

Now, I want to know a role an actor played so well that it surprised you. Let us know in the comments!

Watch Once Upon A Time In Londongrad from BuzzFeed Studios, a new true crime docuseries based on the explosive BuzzFeed News investigation, now streaming on Peacock.

People Are Sharing The Biggest Oscar Snubs Of All Time, And Yes, Some Of Them Will Make You Irrationally Angry

"If people thought it was odd how long it took Leonardo DiCaprio to win an Oscar, it was nothing compared to them."
5 HOURS AGO
BuzzFeed

17 Celebrity Stage Names That Are The Result Of Strict Union Rules, Copyright Infringement, Or The "Old Hollywood Culture" Of Anglicization

19 Continuity Errors In Movies You Love That You Will Now, Unfortunately, Never Be Able To Unsee

"The way Bella keeps shaking the ketchup bottle at her plate, yet theres no ketchup coming out—but she has ketchup. Anytime I feel sad, I remember this and laugh."
2 DAYS AGO
Outsider.com

In Pamela Anderson’s upcoming memoir, Love, Pamela, she claims that Tim Allen flashed her on the set of Home Improvement. Allen says that the incident never happened. However, that didn’t stop some from looking back on the hit 90s sitcom with a critical eye. Before long, a clip resurfaced in which Allen appeared to flash his on-screen wife played by Patricia Richardson.
1 DAY AGO
netflixjunkie.com

If not for his back-to-back blockbusters in the 90s, Will Smith’s career might not have shined as brightly as it did. After he took his first steps into the industry with The Fresh Prince of Bel Air, Will Smith already gained recognition in the television world. It is, however, Michael Bay’s Bad Boys that accelerated the rise of Will Smith. In 1995, Michael Bay, albeit his first time as a director, took on the arduous task of making blockbuster brilliance with Bad Boys and he did just that and much more.
10 HOURS AGO
BuzzFeed

"I looked around and I was in the Forman basement with my wife staring up at the [lighting] grid, dressed as Jackie."
1 DAY AGO
Parade

All About Josh Duhamel's Wife—and His Very Famous Ex

For the record, neither of his marriages were the result of shotgun weddings.
1 DAY AGO
BuzzFeed

"Lol I shake because of my medication for lupus."
14 MINUTES AGO
BuzzFeed

"They literally jumped to the last quarter of the book within 15 minutes."
2 DAYS AGO
BuzzFeed

George Clooney Stopped Jimmy Kimmel From Mocking His Old Freshman Photos: "Half Of My Face Is Paralyzed"

"Wait, I want to point out something, because you're going to laugh and make a joke. I have Bell's palsy there and half of my face is paralyzed."
1 HOUR AGO
BuzzFeed

Josh Duhamel Saved J.Lo From Falling Off A Cliff, And More BTS Secrets From The Cast Of "Shotgun Wedding"

"[My dress] got caught on the wheel. I was going over [the cliff] and I'm looking at Josh [Duhamel] like, 'JOSH! DON'T LET ME GO! PLEASE!'"
22 HOURS AGO
BuzzFeed

19 Common Things Every Gay Teen Did In The Late '90s

A nostalgic look back at the trends, pop culture, and fashions that queer teens in the late '90s were into.
14 MINUTES AGO
BuzzFeed

"It was just a blonde girl."
2 HOURS AGO
BuzzFeed

When aliens come to Earth, one of the first works of art we show them should be the Derry Girls pilot.
3 DAYS AGO
BuzzFeed

The Internet Is Going Wild For Anne Hathaway Dancing At Paris Fashion Week, And I Fully Support It

Not to ruin the magic, but yeah, movie snow should look, like, 10 times grosser than it does.
INDIANA STATE・22 HOURS AGO