10 People Died In An Apartment Fire In Xinjiang. Their Doors Were Locked From The Outside Because Of Covid Restrictions. 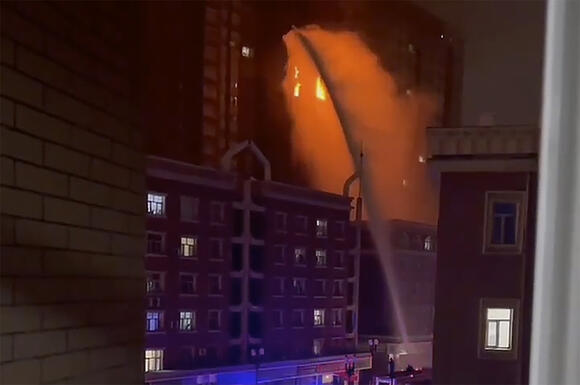 On Douyin, the Chinese parent of TikTok, a video went viral on Friday of a high-rise apartment building on fire. A nearby fire truck sprayed water toward the building from a distance, but the arc of the water stopped short of reaching the actual flames. “Open the door, open the door,” a voice screamed from inside the building. “Someone save us.”

This emergency response on Thursday to a deadly fire in Ürümqi, the capital of a western Chinese province called Xinjiang, has been the focal point of outrage on social media since Thursday night. The city fire department identified the source of the blaze as a power strip that caught fire in a bedroom on the 15th floor.

Government estimates of the casualties put the number of dead at 10 and injured at 9, but residents dispute those figures and say the real toll was higher. Three of the dead were children, authorities said. Abdulhafız Muhammed Emin, a Uyghur Muslim living in exile in Switzerland, told the Associated Press he learned his aunt and her four children had perished in the fire from a phone call.

“She was a wonderful woman, always thinking of her children and how to treat and educate them well,” he said, crying. “My heart is really broken, I cannot bear it.”

Thousands have taken to protesting both online and in the streets, calling for the government to ease up on the country’s strict COVID prevention measures.

The residents in the building had been under lockdown for over 100 days when the fire broke out as part of China’s zero-COVID policy , a global strategy to minimize infections via contact tracing, mass testing, lockdown, and border quarantine — which China has taken to extreme levels with prolonged shutdowns and minimal communication. One unnamed resident in the neighborhood told BBC News that the area had been under a stay-at-home order since Aug. 7.

“We Xinjiang people don't dare to go downstairs without permits as it will violate the law even if the building gate is not locked,” he said. Fire-related disasters have been a concern of residents throughout the zero-COVID policy implementation; earlier this week, a factory fire in Henan province killed 38 and injured two.

Chinese leadership has faced global backlash for their oppression and mass imprisonment of Uighur, Kazakh, and other Chinese Muslim minorities in Xinjiang, which they continue to deny. Many residents in Ürümqi have faced harsh lockdown conditions , with little opportunity to leave and dwindling food and medical supplies, according to social media accounts from citizens. Many of the victims are suspected to be part of Xinjiang’s Muslim minority.

China’s state-run news channel Xinhua News Agency stated the fire broke out around 7:49 p.m. on Thursday evening, and was extinguished at 11:35 p.m.

Users online questioned the three-hour response time, wondering if the particularly strict COVID measures prolonged the rescue process. Hashtags related to the disaster have received over 2.3 million views as of Saturday afternoon. Videos on social media platforms WeChat and Weibo went viral immediately, showing what was said to be the building’s doors bolted shut from the outside with metal wires or wooden dowels that prevented residents from leaving. One resident told the Associated Press that elsewhere in the city, these makeshift barricades have been used as part of the local government’s zero-COVID efforts.

Videos verified by Reuters show people marching together, many wearing masks, pumping their fists in the air, and chanting “end the lockdown.” Another showed protesters in a plaza singing a lyric from China's national anthem: “Rise up, those who refuse to be slaves.” Others shared videos of people clashing with riot police.

“History keeps repeating itself and it’s the common poor people who pay the price,” one Weibo commenter wrote.

In a rare move, Ürümqi Mayor Memtimin Qadir apologized to the people of the city on Friday evening during a press conference, offering condolences to the victims and announcing an investigation. Still, the government pushed back on the swirling online criticism. Li Wensheng, the head of the fire rescue brigade, denied that COVID restrictions played a role in the response.

“Some residents’ ability to rescue themselves was too weak … and they failed to escape,” he said. Li also said that narrow lanes with parked cars made it difficult for fire trucks to gain access to the building.

The government response has only stoked public anger, with many mocking the officials’ statements. “Sorry we thought the rescue team would rescue us,” one wrote . Others have pointed out that the distance between the fire station and the building is less than a kilometer away, calling out Li’s previous statement that first responders had arrived within five minutes.

On Saturday morning, Ürümqi’s minister of propaganda, Sui Rong, announced that they would be easing the lockdown restrictions on the city, as they had “basically achieved zero COVID” due to the lockdown measures. The city lockdown will be lifted “in stages,” Rong said , staggering out neighborhoods by “level of risk” and beginning to allow more people outside. There was no clarity on the time frame for full relaxation of the measures or the number of people who would be allowed to leave. Officials did not acknowledge the demonstrations from the night before, but said that “order will be restored” to the residents’ lives.

China’s information censors have blocked most of the critical posts about the fire by tamping down specific hashtags and keywords, but users continue to repost articles about the fire by using “safe” words in the captions like “OK,” “good,” and “right.”

The world's first human-monkey hybrid has been successfully created in a laboratory, according to shocking research from Chinese scientists. This horrifying development occurred in 2021, after a team of researchers from the United States and Spain traveled to China in order to get around regulations that forbade this kind of research in their own nations.
2 DAYS AGO
Benzinga

Over a dozen letters exchanged between former U.S. President Donald Trump and North Korean leader Kim Jong Un have been published by the Korean-American Club. What Happened: Trump’s self-described 'love letters' from Kim were retrieved by the authorities from his Mar-a-Lago residence in Florida. In the letter, Kim reportedly expressed his willingness to discuss his isolated country’s denuclearization with Trump while sidelining then-South Korean President Moon Jae In, reported Star And Stripes.
FLORIDA STATE・3 HOURS AGO
RadarOnline

Vladimir Putin’s newly launched navy frigate was spotted sailing towards the United States in an alleged “show of strength” this week, RadarOnline.com has learned.The warship, named the Admiral Gorshkov, was launched into the White Sea earlier this month and was initially scheduled to sail through the Atlantic and Indian Oceans before traveling through the Mediterranean Sea to the Black Sea.But according to Daily Mail, Putin’s Admiral Gorshkov was captured on radar on Tuesday making an unexpected diversion west towards the United States before moving south towards Bermuda.Also concerning are the reports indicating the Russian warship executed a “hypersonic missile launch”...
2 DAYS AGO
Health Digest

Is Paxlovid Safe For All People Over Age 65?

Experts advise elderly people infected with COVID to seek immediate antiviral treatment. But is the most popular treatment, Paxlovid, safe for people over 65?
19 MINUTES AGO
Business Insider

Inflatable tanks are a staple of Russia's deception doctrine known as maskirovka, or masking, meant to boost stealth tactics and sow confusion.
14 HOURS AGO
BuzzFeed News

Older Asian Americans In Monterey Park Found A Community In Ballroom Dancing. Some Say A Mass Shooting Won’t Sway Them.

The sudden eruption of mass violence shook the quiet city of Monterey Park, and its tight-knit ballroom community members who found joy and freedom in dancing.
MONTEREY PARK, CA・1 DAY AGO