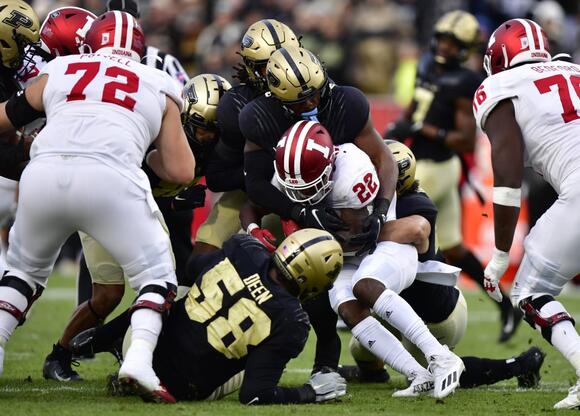 Purdue football is on the road against rival Indiana, looking to claim the Old Oaken Bucket for the second consecutive season while playing for a Big Ten West title. Kickoff is scheduled for 3:30 p.m. ET at Memorial Stadium in Bloomington, Ind. Follow our live blog for updates, news and analysis throughout the game

BLOOMINGTON, Ind. — Purdue football is playing for the Old Oaken Bucket and a Big Ten West title on Saturday against in-state rival Indiana. The matchup is scheduled to kick off at 3:30 p.m. ET at Memorial Stadium.

Welcome to our live blog, where we'll keep you updated on the game in real time, straight from the press box, with news and views as they happen. We'll add highlights and opinions as well. The most recent items are on the top, so just keep refreshing.

It's a huge game day for Purdue football, be sure to follow along below:

6:33 p.m. ET — Conner Bazelak rifles a pass toward the right sideline, but Cory Trice is credited for an interception and runs it back eight yards for a touchdown. Purdue leads 30-10 with 2:17 left to play.

6:32 p.m. ET — Purdue's defense has kept Indiana out of the end zone in the second half, protecting a lead and allowing the offense to put this game on cruise control.

6:15 p.m. ET — Indiana is unable to move the chains on fourth down despite reaching the red zone for the third consecutive drive. Purdue takes over on downs from its own 17-yard line with a 14-point lead.

5:59 p.m. ET — Indiana makes it a one-score game with a 28-yard field goal by Charles Campbell. Purdue has been penalized five times for 55 yards. The Hoosiers have reached the red zone on back-to-back drives.

5:45 p.m. ET — Purdue holds Indiana to no points after an 8-play, 57-yard drive by coming away with a blocked field goal. The Boilermakers keep a 17-7 lead with time running down in the third quarter.

5:43 p.m. ET — Penalties are hurting the Purdue defense on this drive. Indiana is up to the 25-yard line.

5:35 p.m. ET — Devin Mockobee is getting more involved here in the second half. He takes a handoff and gets into the end zone from 27 yards out, giving Purdue a 17-7 lead with 6:06 to play in the third quarter.

Mockobee has 121 yards from scrimmage on just 12 touches.

5:29 p.m. ET — Indiana is trying to get after Aidan O'Connell, but the veteran signal-caller is getting the ball out of his hands quickly. He fires deep down the left sideline intended for TJ Sheffield, and the Hoosiers are flagged for holding in the secondary.

The Boilermakers are to the opposing 39-yard line and are looking to extend their lead here in the third quarter.

5:16 p.m. ET — Aidan O'Connell just overshot Charlie Jones, which would have put Purdue near the goal line. Instead, the offense faces second-and-10 from the Indiana 32-yard line.

5:12 p.m. ET — Purdue picks up first downs on back-to-back plays. First, Aidan O'Connell rifled a pass to tight end Payne Durham before keeping the ball himself on a run of 10 yards.

5:10 p.m. ET — Purdue forces a three-and-out on Indiana's opening drive of the second half. Charlie Jones calls for a fair catch at the 18-yard line, and the Boilermakers will look to find a rhythm on offense.

4:46 p.m. ET, HALFTIME — Indiana lets the clock run out to end the half, and Purdue trails 7-3 going into the locker room. The Hoosiers are outgaining the Boilermakers 196-133, with a 71-yard touchdown being the biggest play of the game so far.

4:39 p.m. ET — Purdue takes a delay of game penalty on fourth down with 10 yards to go. The Boilermakers punt still trailing 7-3 with 3:43 to play before halftime. Jack Ansell delivers a fantastic punt that rolls out of bounds at the 1-yard line.

4:34 p.m. ET — A screen pass to Charlie Jones works to perfection. Purdue's leading receiver finds open field and races down the left sideline for a gain of 58 yards to the Indiana 34-yard line.

4:29 p.m. ET — Purdue's defense gets off the field, but Indiana is controlling the line of scrimmage both offensively and defensively so far this afternoon. Following a punt by the Hoosiers, the Boilermakers will start their drive from the 5-yard line with 4:57 before halftime.

4:27 p.m. ET — Indiana is slowly moving the ball down the field and has already picked up nine first downs in the opening half. Purdue will have to slow down the running game defensively.

4:19 p.m. ET — Aidan O'Connell is sacked for a loss of nine yards. He's been taken down in the backfield twice already in the first half. Purdue faced third down and needs 16 yards to move the chains.

The Boilermakers have run 13 plays for 70 yards, while the Hoosiers have gained 133 total yards and are just outside the red zone. The defense will have to adjust to Conner Bazelak now being under center.

4:03 p.m. ET — Indiana elects to stay on the field for yet another fourth down and running back Shaun Shivers is able to move the chains. On the next play, quarterback Dexter Williams II goes down with a non-contact injury and has to be carted off the field.

4:00 p.m. ET — Indiana goes for it on fourth down from its own 45-yard line and picks up 10 yards with some trickery. Dexter Williams II pitches to wide receiver Emery Simmons, who beats the Purdue defense on the left side.

3:53 p.m. ET — Purdue gets close to midfield on its second drive of the game, but Aidan O'Connell is sacked on third down back at the 38-yard line. The Boilermakers will punt after going just 13 yards in six plays.

3:46 p.m. ET — Indiana strikes on a 71-yard touchdown run by Jaylin Lucas, and Purdue finds itself trailing 7-3 with 11:02 still to play in the first quarter. The Hoosiers went 74 yards in just two plays on their opening drive.

3:38 p.m. ET — Purdue into the red zone on its opening drive. Indiana has struggled to slow down this offense, whether it be through the air or on the ground. Devin Mockobee making his way back to the field changes the dynamic for the Boilermakers offensively.

3:36 p.m. ET — Aidan O'Connell completes to Andrew Sowinski on Purdue's first play from scrimmage, picking up 21 yards through the air. On the very next play, Devin Mockobee takes a handoff for 10 yards.

Kickoff — Indiana wins the coin toss and elects to defer to the second half. Purdue will receive the ball to start the game, putting Aidan O'Connell and the offense on the field with a chance to start things off quickly.

You can keep up to date on everything at Boilermakers Country by liking and following our Facebook page: Purdue Boilermakers on Sports Illustrated/FanNation .

Purdue junior center Zach Edey earned his sixth Big Ten Player of the Week honor, tying Caleb Swanigan for the most in a single season in program history. He averaged 25.5 points and 15.5 rebounds per game for the Boilermakers across two contests.
WEST LAFAYETTE, IN・38 MINUTES AGO
BoilermakersCountry

The top-ranked Purdue basketball team turned the ball over 11 times on the road against Indiana in the first half, falling behind by as many as 16 points. The deficit was too much to overcome despite a furious second-half comeback attempt led by Zach Edey.
WEST LAFAYETTE, IN・1 DAY AGO
BoilermakersCountry

Purdue retained the No. 1 spot atop the Associated Press Top 25 college basketball poll despite losing to rival Indiana 79-74 on the road. The Boilermakers, now 22-2 and 11-2 in the Big Ten, were among four teams receiving first-place votes.
WEST LAFAYETTE, IN・4 HOURS AGO
BoilermakersCountry

Despite losing for the second time this season, Purdue is still in the driver's seat for the Big Ten regular-season title. Indiana has won six of its last seven games heading into a huge matchup against Rutgers, and Maryland rides a four-game winning streak with a favorable schedule up ahead.
WEST LAFAYETTE, IN・1 DAY AGO
BoilermakersCountry

No. 1 Purdue basketball fell into an early double-digit deficit against No. 21 Indiana, eventually losing 79-74 at Assembly Hall after a strong comeback attempt. Zach Edey led the Boilermakers with 33 points and 18 rebounds but also had five turnovers.
WEST LAFAYETTE, IN・1 DAY AGO
BoilermakersCountry

No. 1 Purdue basketball lost to No. 21 Indiana 79-74 on the road Saturday at Assembly Hall. Zach Edey, Braden Smith and David Jenkins Jr. addressed the media after the game to discuss what went wrong.
WEST LAFAYETTE, IN・1 DAY AGO
BoilermakersCountry

Zach Edey and Trayce Jackson-Davis are two of the best big men in all of college basketball, and they'll share the floor when Purdue tips off against Indiana on Saturday inside Assembly Hall.
WEST LAFAYETTE, IN・2 DAYS AGO