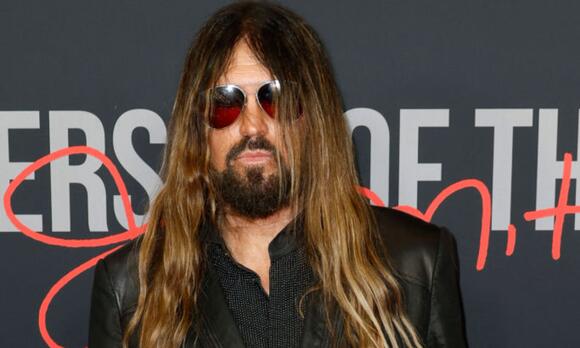 People who love country music probably also have an affinity for Billy Ray Cyrus , but have you seen his new look lately? It’s making some of his fans ask questions. Whether it’s about his new look or why he did it, those questions are about to be answered. Kind of. Well, his new look has Billy Ray all tied up in pigtails. What? Do you mean his long-haired look is no more? Not necessarily. After all, he’s put his hair up in pigtails for a very good reason.

He’s starring in a movie! That’s right, Billy Ray lovers. He’s actually playing a country music star (go figure) in Christmas in Paradise . This is a new comedy set to premiere on November 11 in theaters, and November 15 on digital platforms and DVD/Blu-Ray. For this movie, Cyrus plays Jimmy Love. He’s a mellow fellow who has a little hippie flair in the air. And yes, he gets a chance to sing his big high Achy Breaky Heart .

“I knew when I put my hands on this script that it was written with love,” Cyrus said. He adds that, “When I started reading it, I said, ‘My God, I am Jimmy Love!'” And no, there is no relation to Buddy Love, the famed Jerry Lewis character from The Nutty Professor . This flick happens to be a follow-up to a 2021 comedy Father Christmas is Back . Kelsey Grammer will return to play James Christmas, who is a freewheeling rolling stone who seldom, if ever, feels bound by family ties, Cowboys & Indians reports.

So, in this sequel, it happens to be a few days before Christmas in London. This is when James’ three daughters — Joanna, played by Elizabeth Hurley, Caroline, played by Nathalie Cox, and Paulina, played by Naomi Frederick —  discover their father has broken up with his fiancée. He’s now, as the credit card bill states, gone to the Caribbean island of Nevis.

All three of them are in a tizzy about dear old Dad. They head out to Neris with the great plan to “save” their father and bring him home for Christmas. Well, when they get there, James is quite happy about his life.

Philippe Martinez, who is the director and co-scriptwriter, said that he wanted Christmas in Paradise to have an Ameircan feel to it. Why? Because Father Christmas Is Back has a British sensibility to it. Now, go set a movie in the Caribbean and get Billy Ray Cyrus involved. It’ll change that sensibility right up. Martinez also wanted more music, dancing, and laughter in the flick.

He looks like crap. The Nineties are over..dump the locks. They work sexy in the 90s it's super not sexy now! Does he think he's in his twenties. Midlife crisis is correct.

Billy is going through mid life crisis he's engaged to FireRose 34 years old ..he's not in the best terms with adult children what next marriage Fatherhood been down that road ..same scenario as David Foster much younger woman then marriage and baby these men already did this thing ...have get a do over ...makes no sense ...

Well that will stop me from ever watching a Christmas movie again. That whole family needs to go to a rehab center.

A new NASCAR season and there might be the same old problems. Denny Hamlin talked about feeling sick after the Clash. On his plane ride back, the Joe Gibbs Racing driver did not feel too well and had a rough night. While talking on the first episode of his new...
9 HOURS AGO
Outsider.com

Never one to hold back on sharing his thoughts, Tim Allen gave his take on the Chinese spy balloon and social media has some thoughts. Try Paramount+ FREE for a week. Subscribe here to watch your favorite shows. Featuring a Chinese lantern in the tweet, Tim Allen wrote, “A close...
MONTANA STATE・2 DAYS AGO
INSIDE News

In recent weeks we have been seeing how Priscilla Presley had been left out of Lisa Marie's estate after her death. Lisa had changed her will in 2016, which would leave her daughter Riley Keough as the ultimate beneficiary.
15 HOURS AGO
DoYouRemember?

The 2023 Grammys kicked off on Sunday, February 5, starring musical artists celebrating musical artists. Several very recognizable names saw their work honored, including Ozzy Osbourne, who took whom two awards that night. But viewers found themselves distracted by Madonna‘s face when the “Like a Prayer” singer took the stage for a special introduction.
LOS ANGELES, CA・17 HOURS AGO
Aneka Duncan

We live in modern times. Women have the right to do whatever they want, including how to dress. But, where do you compromise and give a little?. A man was put in an unfair situation by his girlfriend. He took his story to the internet. His girlfriend loves dressing up and wearing short dresses which he has no problem with. His boss and his wife are the total opposite of his girlfriend. They are extremely conservative people. (source)
3 DAYS AGO
INSIDE News

Priscilla Presley, Elvis Presley's widow said her daughter Lisa's will that withdraws her as a beneficiary is completely invalid, according to court documents. The daughter and only heiress of Elvis Presley, who died on January 12, had named Barry Siegel (ex-manager) and her mother Priscilla as co-administrators of her estate in life and death, but apparently, Lisa had changed her will.
3 DAYS AGO
RadarOnline

Kevin Costner’s Yellowstone will be coming to an end and the actor’s future with the show is up in the air, RadarOnline.com has learned. Earlier today, Deadline broke the story, Paramount + and Yellowstone creator Taylor Sheridan have come up with a plan to end Yellowstone. The parties have decided to launch a Matthew McConaughey-lead spin-off which will continue with the majority of the cast. Sources revealed that Costner has been refusing to commit to a lengthy shooting schedule. Deadline said that Costner originally had agreed to 65 days of shooting for the show. However, for the first part of...
8 HOURS AGO
Outsider.com

Nobody will ever “send it” quite like Ross Chastain ever again. NASCAR recently banned the driver’s epic “Hail Melon” move at Martinsville, much to the dismay of race fans. Chastain, though, is taking it in stride. Chastain rode the wall and, quite literally, put the...
2 DAYS AGO
INSIDE News

Celebrities who died in January 2023

This beginning of the year has had some important casualties in the world of acting, entertainment, and sports. One of the most mentioned unexpected deaths was that of Lisa Loring, the actress who played the original Wednesday Addams that the famous television series "The Addams Family" from 1964.
17 HOURS AGO
E! News

Chris Brown is not impressed with the 2023 Grammys. During music's biggest night, the rapper had his eyes on the Best R&B Album category. After all, the 33-year-old was nominated alongside Mary J. Blige, Robert Glasper, Lucky Daye and PJ Morton. But when Robert was announced as the winner during...
1 DAY AGO
Outsider.com

Good ole’ Florida, the state where go head-to-head with alligators, and people wrangle snakes on a daily basis. In this bizarre albeit unsurprising incident, a Florida man allegedly bit off the head of a pet ball python during a domestic dispute. According to reports via NBC Miami, police responded...
FLORIDA STATE・2 DAYS AGO
Outsider.com

Stephen A. Smith has made it known that he’d love to be the successor to Jimmy Kimmel. Still, that doesn’t mean he wasn’t nervous as he’s ever been when he filled in for the latter two years ago. Smith has been promoting his new book over...
15 HOURS AGO
Outsider.com

Well, Rupp Arena has lost one Blue Coat. The ushers are a staple at Kentucky basketball games, but one man just lost his gig. After the ESPN cameras caught Doug giving a rowdy group of Florida Gators fans the bird, the University of Kentucky stepped in. For those that aren’t...
LEXINGTON, KY・14 HOURS AGO
Outsider.com

Former Pittsburgh Steelers linebacker wondered why his phone was blowing up this weekend. Then he heard about the video ex-teammate and NFL wide receiver Antonio Brown posted. Brown took to social media recently to share that he believed James Harrison gave him CTE while the two were teammates in Pittsburgh. That’s a pretty dangerous allegation to make on Brown’s part.
PITTSBURGH, PA・2 DAYS AGO
Outsider.com

Sean Payton is wasting no time in getting acclimated to his new role as head coach of the Denver Broncos. The Broncos formally introduced Payton Monday, with much of the conversation centered around quarterback Russell Wilson. Payton is steadfast that Wilson can make improvements after an underwhelming first season in Denver, though it will have to come under the direction of Payton’s coaching staff. Asked if Wilson’s personal quarterback coach — Jake Heaps — would remain involved, Payton took a firm stance.
DENVER, CO・8 HOURS AGO