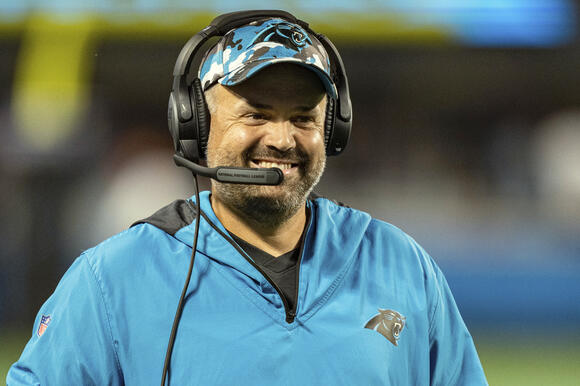 “It is a privilege to welcome Coach Matt Rhule, his wife Julie, and their family to Nebraska,” the athletic director said. “Coach Rhule has created a winning culture throughout his coaching career, and he will provide great leadership for the young men in our football program. Matt is detail-oriented, his teams are disciplined and play a physical brand of football. Matt also has the personality and relationship-building skills to build a great staff and excel in recruiting.”

Rhule has been out of work less than two months since getting fired five games into his third season with the Panthers.

“It is a tremendous honor to be chosen to lead the Nebraska Football program,” Rhule said. “When you think of great, tradition-rich programs in college football Nebraska is right at the top of the list.  The fan base is second to none, and I consider it a privilege to have the opportunity to coach in Memorial Stadium on Tom Osborne Field. My family and I are so grateful to become a part of the Husker Family, and we can’t wait to get started.”

He was 11-27 with Carolina and left with about $40 million remaining on the seven-year, guaranteed $62 million contract he signed in 2020. According to Forbes, the contract made Rhule the sixth-highest-paid coach in the NFL when he signed in 2020.

DETROIT (AP) — Saddiq Bey scored 22 points, including a tiebreaking 3-pointer with 32.1 seconds left, and the Detroit Pistons rallied to beat the Charlotte Hornets 118-112 on Friday night. Mason Plumlee missed five free throws in the last 6:04 as Detroit outscored Charlotte 27-18 in the fourth quarter. Jaden Ivey had 24 points for […]
DETROIT, MI・1 DAY AGO
WNCT

DAVIDSON COUNTY, N.C. (WGHP) — A new NASCAR season is almost here, and one Davidson County racing superfan is getting a huge gift. Camden Walser suffered a stroke just days after birth, and life has been an uphill battle, but it hasn’t dampened his spirits. “Camden, I like to say, never met a stranger. He […]
DAVIDSON COUNTY, NC・1 DAY AGO
WNCT

CHARLOTTE, N.C. (QUEEN CITY NEWS) – The suspected Chinese spy balloon that has hovered over the U.S. could be seen passing across the Carolinas on Saturday alarming, and piquing the curiosity, of onlookers across the Carolinas. The balloon was spotted over Charlotte shortly before 10 a.m. Saturday and its trajectory was eastward, straight across the […]
CHARLOTTE, NC・16 HOURS AGO
WNCT

The man charged in the taking of two emperor tamarin monkeys from the Dallas Zoo has also been charged in two other recent incidents there involving holes that were cut in the fences for enclosures housing langur monkeys and a clouded leopard, authorities said Friday.
DALLAS, TX・1 DAY AGO
WNCT

Fire officials said the fire started at a home on the 2100 block of Weyland Avenue near Marlowe Avenue.
CHARLOTTE, NC・1 DAY AGO
WNCT

Police: Man arrested in taking of monkeys from Dallas Zoo

DALLAS (AP) — A 24-year-old man has been arrested in the taking of the two monkeys from the Dallas Zoo, police said Friday, adding that he was taken into custody after being spotted near animal exhibits at the city’s aquarium. Davion Irvin was arrested Thursday on six counts of animal cruelty — three each for the […]
DALLAS, NC・1 DAY AGO
WNCT