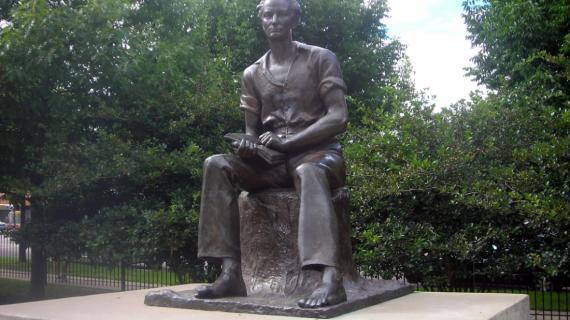 ( WBBM NEWSRADIO) -- Police are looking for whoever defaced statue of a young Abraham Lincoln in the Edgewater neighborhood on Thanksgiving Day.

It’s the second time a Lincoln statue has been defaced in Chicago in recent memory, according to the Chicago Tribune.

The newspaper reports vandals splashed the statue in Senn Park with red paint and wrote the words "colonizer" and "land back" below it.

They also wrote "Dakota 38," a possible reference to the U.S.-Dakota War of 1862, also known as the Sioux Uprising, when 38 Dakota Sioux were executed on Lincoln's order.

Police are currently investigating the vandalism.

The Tribune reports the statue will be cleaned on Monday. The circa-1945 statue by Charles Keck depicts a clean-shaven, barefoot Lincoln reading a book.

Get with the present. That was a long long time ago . A lot has changed and this country has changed too . Bless their souls and we have to deal with today’s problems.

The student had been showing the gun to classmates at Chute Middle School, but the staff were able to take the gun from the student “without incident,” Evanston police said in a statement.
EVANSTON, IL・2 HOURS AGO
WBBM News Radio

The Universal Temple of Christ was a one-story brick and cinder block building on 55th and Damen. Fire hit the building early Saturday morning and was so intense it caused the roof to cave in. Pastor Edrena Bell is determined to rebuild.
CHICAGO, IL・7 HOURS AGO
WBBM News Radio

Challenges of community policing in Chicago

Community Policing widely supported in Chicago, but even people in the Criminal Justice reform arena admit people are still arguing over what it is…or should be.
CHICAGO, IL・2 DAYS AGO
WBBM News Radio

Chicago has edge when it comes to quickness of purchased gun being used in a crime, report says

Chicago’s “time-to-crime” — the period between the purchase of a gun and its recovery by the police in a crime — was far shorter than in New York or Los Angeles, according to a new government report.
CHICAGO, IL・53 MINUTES AGO
WBBM News Radio

Two Chicago residents have been sentenced to three years in prison in connection to a theft from an Ulta Beauty store in Oak Brook, the DuPage County State’s Attorney’s Office announced. Authorities said they helped steal $15,000 worth of perfume.
OAK BROOK, IL・3 HOURS AGO
WBBM News Radio

A teenage boy was shot and killed in North Lawndale, Chicago police said. The 16-year-old boy was walking on a sidewalk at 22nd and Keeler Avenue just after 8:30 p.m. when two men got out of a car and started shooting, according to police.
CHICAGO, IL・8 HOURS AGO
WBBM News Radio

According to Illinois Sen. Dick Durbin, reports of mail carrier robberies more than tripled between 2018 and 2021 — and on Sunday, Chicago postal workers said more needs to be done to ensure their safety.
CHICAGO, IL・22 HOURS AGO
WBBM News Radio

Chicago police have issued an alert about a thief who allegedly robbed three women in Loop parking garages in the last 10 days. The most recent robbery was Saturday at 3:15 in the afternoon in a parking garage near Washington and Wells Streets.
CHICAGO, IL・1 DAY AGO
WBBM News Radio

Alderman says mail service is getting spotty in his ward

Chicago Ald. Raymond Lopez says he is trying once again to get some answers from the U.S. Postal Service about why the service is so spotty.
CHICAGO, IL・2 DAYS AGO
WBBM News Radio

Crime is top of mind for many Chicago residents voting for mayor three weeks from tomorrow. Several candidates, including Cook County Commissioner Brandon Johnson, have plans to address it by investing more in neglected neighborhoods.
CHICAGO, IL・1 HOUR AGO
WBBM News Radio

Cartwheels, flips, and handstands were just some of the moves kids showed off at Tuley Park on Chicago’s South Side Saturday. The nearly 120 children were there to try out for the famed Jesse White Tumblers.
CHICAGO, IL・1 DAY AGO
WBBM News Radio

Politicians and public servants are mourning the death of Laurence Msall, the head of the Civic Federation and budget expert who served in two Illinois administrations. Msall’s death was described as “a huge loss for the city.” He was 61.
CHICAGO, IL・1 DAY AGO
WBBM News Radio

Crew carjacks woman in Maserati parked on North Side: CPD

Chicago police said a woman was sitting behind the wheel of a parked Maserati near Cullom and Hoyne when four or five carjackers approached. Two had guns and ordered her to get out.
CHICAGO, IL・6 HOURS AGO
WBBM News Radio

Climbing for a cause: Nearly 2,000 ascend to top of Aon Center, raising money for local children's hospital

There were a lot of tired people in Chicago Sunday after they climbed the 80 flights, more than 1,600 steps, to the top of the Aon Center in downtown Chicago to benefit Lurie Children’s Hospital.
CHICAGO, IL・4 HOURS AGO
WBBM News Radio

An Aurora man is fighting for his life after he was shot by police. Officers were called to a home near Colorado Avenue and North Elmwood Drive around 12:30 p.m. for reports of a person armed with knives who was making threats toward others.
AURORA, IL・9 HOURS AGO
WBBM News Radio

Things to do in Chicago this weekend

WBBM Newsradio’s Rachel Pierson has the latest roundup of weekend activities across the Chicago region. Among them: the final days of Cider Week.
CHICAGO, IL・3 DAYS AGO
WBBM News Radio

Residents of an apartment building in the South Shore neighborhood that lost heat and hot water at the beginning of January believe the property management company is trying to get them out permanently.
CHICAGO, IL・2 DAYS AGO
WBBM News Radio

Migrants arrive at Woodlawn shelter despite attempt to block their buses

Buses carrying migrants arrived Thursday at a former elementary school in Woodlawn that’s now being called the Wadsworth Shelter. The bus arrived despite the effort of two nearby residents, who stood in the middle of the street to block the buses.
CHICAGO, IL・3 DAYS AGO
WBBM News Radio

Over 400 immigrant community leaders joined the Illinois Coalition for Immigrant and Refugee Rights (ICIRR) at Benito Juarez High School on Saturday to rally for pro-immigrant policies in Illinois. Organizers called for better funding from the state.
CHICAGO, IL・1 DAY AGO