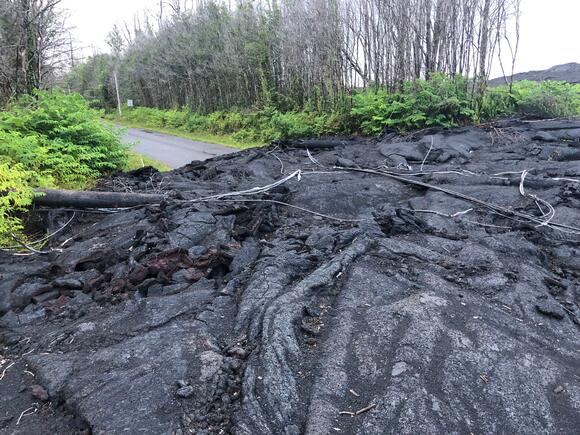 HONOLULU ( KHON ) — Mauna Loa remains in a yellow advisory with dozens of small daily earthquakes, a sign that the large volcano could be headed toward eruption.

The unrest began back in July and peaked in September with 40 to 50 small earthquakes a day. Recently, there have been about 10 to 20.

While an eruption is not imminent, officials say there are other signs of unrest.

“We’re continuing to see the same levels of increased rates of inflation at the summit, which is indicative of magma moving into that shallow reservoir of Mauna Loa,” Hawaiian Volcano Observatory geophysicist Andria Ellis said.

Mauna Loa is one of five volcanoes that together make up the Big Island of Hawaii, which is the southernmost island in the Hawaiian archipelago. It’s not the tallest (that title goes to Mauna Kea) but it’s the largest and makes up about half of the island’s land mass.

Mauna Loa last erupted 38 years ago. In written history, dating to 1843, it’s erupted 33 times. Its height gives it steeper slopes, which allow lava to rush down its hillsides quickly.

It’s a tough challenge for Hawaii County Civil Defense to coordinate what an eruption would do. Each eruption since 1843 started at the summit. Half the time, the volcano also began erupting from vents at lower elevations. The other half of the time it only erupted in the summit caldera.

Hawaii volcanoes like Mauna Loa tend not to have explosion eruptions like Mount St. Helens, for example. Still, lava covering one of the island’s many two-lane highways would be tough on residents and first responders.

“Shutting down the main arteries will disrupt life,” Hawaii County Civil Defense administrator Talmadge Magno said. “I went down to lower Puna a couple of weeks ago and roads are still out. They are planned to be reconstructed, but life is returning. So that’s living on an active volcano. These are dynamic, and we have to face this.”

New technology could save ‘ōhi’a trees from rapid death

With that, it’s up to residents to have a plan.

“We need to be prepared for that volcano if it does go off and affects communities. But what about the prior stuff? What about the earthquakes?” Big Island resident Marni Renner asked. “If there’s any earthquake, are people even prepared for that? Simple things like gas in your car, propane tanks, having an emergency kit or backpack packed for each person in your household.”

There could also be situations where families are separated.

During an eruption, civil defense can rely on HVO maps to pinpoint where flows would go to keep people out of harm’s way and avoid evacuating random large communities if it’s not necessary.

The Hawaiian Volcano Observatory has more than 60 GPS stations on Mauna Loa taking measurements to estimate the location and the amount of magma accumulating beneath the surface.

Scientists use tiltmeters to track long-term changes in the tilting of the ground, helping them identify when the ground is swelling or deflating. A rapid change in tilt can indicate when an eruption will occur.

There’s also a thermal webcam at Mauna Loa’s summit that will identify the presence of heat. And satellite radar can keep track of ground swelling and deflation.

A newly minted Coast Guard rescue swimmer saved a man’s life Friday at the mouth of the Columbia River between Oregon and Washington state just after a giant wave rolled the yacht he was piloting and threw him into the surf.
OREGON STATE・2 DAYS AGO
WSPA 7News

Chinese balloon high over US stirs unease far below

The Chinese balloon drifting high above the U.S. and first revealed over Montana has created a buzz down below among residents who initially wondered what it was — and now wonder what its arrival means amid a chorus of alarm raised by elected officials.
MONTANA STATE・2 DAYS AGO
WSPA 7News

Some South Carolina and North Carolina residents have taken pictures of the suspected Chinese spy balloon that can be seen here:
SOUTH CAROLINA STATE・1 DAY AGO
WSPA 7News

Florida beaches typically rank among the best in America. However, several recently ranked among the most dangerous to visit in the country.
FLORIDA STATE・3 DAYS AGO
WSPA 7News

Governor Henry McMaster issued a statement after the United downed a suspected Chinese spy balloon off the Carolina coast on Saturday.
1 DAY AGO
WSPA 7News

The Powerball jackpot rose once more to $747 million Saturday night after the Feb. 4 drawing still had no jackpot winner.
PENNSYLVANIA STATE・1 DAY AGO
WSPA 7News

From seeing the successful turnout of hundreds of residents piling into Greenwood State Park on Saturday afternoon, you would never know it was the first year this event was put together.
GREENWOOD, SC・1 DAY AGO
WSPA 7News

These Illinois cities are among the safest in America: report

When you’re thinking about moving to a new city, safety is probably one of the main factors you take into consideration. If Illinois is one of your top states to live in, you are in luck.
ILLINOIS STATE・18 HOURS AGO
WSPA 7News

(AP) – Two weeks into the double murder trial of South Carolina attorney Alex Murdaugh, prosecutors haven’t presented any direct evidence that he killed his wife and son at their home in June 2021. There is no confession, no surveillance camera footage, no recording of the victims’ final moments. If found guilty of murdering his wife, Maggie, 52, and […]
SOUTH CAROLINA STATE・5 HOURS AGO
WSPA 7News

Throwing stars are currently illegal in Indiana, but the bill would lift that ban for recreational use.
INDIANA STATE・23 HOURS AGO