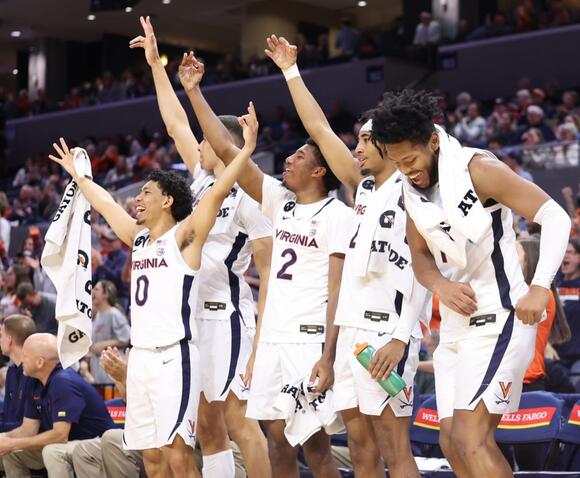 Last year, Virginia was one of three ACC teams that lost on the opening night of the 2021-2022 college basketball season. This season, the Cavaliers stand alone as the only undefeated team remaining in the Atlantic Coast Conference.

What a difference a year makes.

UVA took care of business on Friday night with a 72-45 win over Maryland Eastern Shore to move to 5-0 on the season, while the other two remaining undefeated ACC teams each suffered their first losses on neutral courts. Notre Dame fell to St. Bonaventure 63-51 and No. 1 North Carolina was stunned by Iowa State in a 70-65 upset loss in Portland.

The lone exception is Virginia, one of just 26 remaining undefeated teams in all of college basketball. Last weekend, the Cavaliers put together an incredible effort in Las Vegas, taking down two ranked opponents - Baylor and Illinois. As a result, UVA shot up 11 spots in the AP Top 25 to No. 5 , the largest week-to-week rankings jump the Cavaliers have experienced since 1993. With No. 1 UNC losing to Iowa State and No. 3 Kansas falling to No. 22 Tennessee, Virginia could find itself ranked as high as No. 3 in the AP poll on Monday.

It's still very early in the season, but Tony Bennett's Cavaliers are indisputably the top team in the Atlantic Coast Conference right now.

Virginia plays at Michigan in the ACC/Big Ten Challenge on Tuesday night before returning home to play its first ACC game of the season against Florida State next Saturday.

Virginia Up to No. 6 in Latest AP Top 25 Men's Basketball Poll

The Cavaliers rose one spot to No. 6 after dismantling Boston College on Saturday
CHARLOTTESVILLE, VA・22 HOURS AGO
Cavaliers Now

Jayden Gardner Leads No. 6 Virginia to Gritty 67-62 Win at Syracuse

Gardner scored 17 points and made a couple of clutch plays late in the game to help the Cavaliers extend their winning streak to seven games
CHARLOTTESVILLE, VA・11 HOURS AGO
Cavaliers Now

Virginia Falls to No. 12 Virginia Tech 72-60 in Hard-Fought Battle

The Cavaliers kept pace with the Hokies until late in the fourth quarter, but ultimately came up short in the Commonwealth Clash
BLACKSBURG, VA・1 DAY AGO
Cavaliers Now

The Cavaliers look to complete the season sweep with a win over the Orange at the Dome on Monday night
SYRACUSE, NY・1 DAY AGO
Cavaliers Now

Armaan Franklin and Jayden Gardner scored 18 points each and the Cavaliers pulled away in the second half for their sixth win in a row
CHARLOTTESVILLE, VA・2 DAYS AGO
Cavaliers Now

Murphy will be the first former UVA basketball player to participate in the NBA Dunk Contest since Ralph Sampson in 1984
CHARLOTTESVILLE, VA・1 DAY AGO