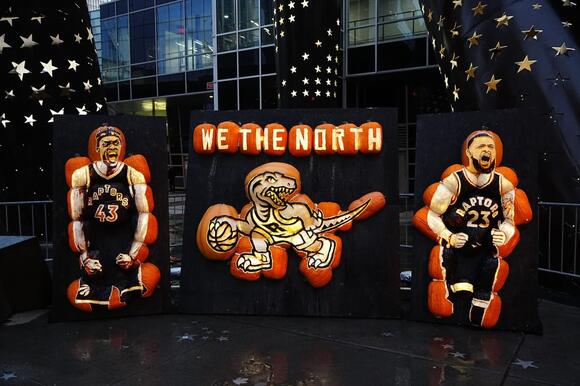 The Dallas Mavericks and Toronto Raptors have announced their injury reports.

The Toronto Raptors and Dallas Mavericks are facing off in Canada on Saturday evening.

For the game, the two teams have updated their injury reports as of 11:30 Eastern Time.

The Mavs have ruled out Tyler Dorsey, Jaden Hardy and McKinley Wright IV.

As for the Raptors, Precious Achiuwa, Scottie Barnes, Pascal Siakam, Otto Porter Jr. and Justin Champagnie have been ruled out.

Fred VanVleet and Dalano Banton are both listed as questionable.

Coming into the night, the Mavs are in the middle of a two-game losing streak and 9-8 in 17 games played.

They are the ninth seed in the Western Conference but only 2.5 games behind the Phoenix Suns for the first seed.

At home, they have been brilliant, with an 8-3 record in Dallas, but on the road, they are struggling in a big way.

In the six games they have played away from Dallas, they are an abysmal 1-5.

Over their last ten games, the Mavs are 5-5.

The Raptors come into the night as the eighth seed in the Eastern Conference with a 9-9 record in their first 18 games.

They are also struggling on the road (3-7 in ten games outside of Canada) but have been good at home with a 6-2 record in eight games.

In addition, the Raptors are in the middle of a two-game losing streak and 4-6 in their last ten games played.

The Mavs made the Western Conference Finals last season, while the Raptors lost in the first round of the NBA Playoffs.

More on the Toronto Raptors can be read here

More on the Dallas Mavericks can be read here

The Golden State Warriors have announced that Ryan Rollins will undergo surgery.
SAN FRANCISCO, CA・1 HOUR AGO
The Comeback

Shocking and frankly terrifying news broke regarding Memphis Grizzlies superstar Ja Morant on Sunday afternoon. The story doesn’t quite paint the 2022 Most Improved Player or his associates in the most positive of lights either. The Athletic delivered a bombshell report that detailed the shocking incident. It occurred last month after a game between Morant’s Grizzlies Read more... The post NBA world reacts to absolutely shocking Ja Morant news appeared first on The Comeback: Today’s Top Sports Stories & Reactions.
MEMPHIS, TN・22 HOURS AGO
FastBreak on FanNation

Los Angeles Lakers guard Patrick Beverley sent out a tweet after Kyrie Irving was traded from the Brooklyn Nets to the Dallas Mavericks.
DALLAS, TX・21 HOURS AGO
ClutchPoints

The Golden State Warriors went back to their title-winning starting lineup in a much-needed win at Chase Center on Saturday. Steph Curry, Klay Thompson, Andrew Wiggins, Draymond Green and Kevon Looney raced out to an 18-7 lead over the Dallas Mavericks, overwhelming a visiting team playing without not just top-tier MVP candidate Luka Doncic, but also Christian Wood. If not for Curry leaving late in the third quarter with a lower left leg injury, Golden State surely wouldn’t have almost blown another massive second-half advantage while holding on for a 119-113 victory.
SAN FRANCISCO, CA・1 DAY AGO
Larry Brown Sports

Kyrie Irving terrorized Joe Tsai’s Brooklyn Nets for nearly four seasons, and it sounds like the Nets owner got the last laugh with the problematic guard. On Friday we learned that Irving wanted to be traded by the Nets ahead of Thursday’s deadline. Immediately, there was speculation that Irving would end up with the Los... The post Nets owner got last laugh with Kyrie Irving through petty move appeared first on Larry Brown Sports.
NEW YORK CITY, NY・17 HOURS AGO
FastBreak on FanNation

Chris Haynes of TNT and Bleacher Report reported that the Phoenix Suns offered Chris Paul to the Brooklyn Nets in a package for Kyrie Irving.
PHOENIX, AZ・17 HOURS AGO
FastBreak on FanNation

According to Jack Pilgrim of On3, Boston Celtics legend Rajon Rondo could join the Kentucky Men's Basketball coaching staff.
BOSTON, MA・2 DAYS AGO
FastBreak on FanNation

The Los Angeles Clippers and Brooklyn Nets have announced their injury reports.
LOS ANGELES, CA・1 HOUR AGO
FastBreak on FanNation

According to Keith Pompey of The Philadelphia Inquirer, Furkan Korkmaz has requested a trade from the Philadelphia 76ers.
PHILADELPHIA, PA・29 MINUTES AGO
FastBreak on FanNation

Los Angeles Lakers guard Russell Westbrook has been putting up big numbers off the bench.
LOS ANGELES, CA・1 DAY AGO
FastBreak on FanNation

On Sunday, the Los Angeles Lakers announced that they have assigned rookie guard Max Christie to the South Bay Lakers in the NBA G League.
LOS ANGELES, CA・1 DAY AGO
FastBreak on FanNation

Ja Morant has been ruled out for Sunday's game.
MEMPHIS, TN・22 HOURS AGO
FastBreak on FanNation

BREAKING: Kyrie Irving Has Been Traded

According to Shams Charania of The Athletic and Stadium, the Brooklyn Nets are trading Kyrie Irving to the Dallas Mavericks.
BROOKLYN, NY・1 DAY AGO
FastBreak on FanNation

Giannis Antetokounmpo is on the injury report for Monday's game.
MILWAUKEE, WI・45 MINUTES AGO
FastBreak on FanNation

Trae Young has been ruled out for Saturday's game.
ATLANTA, GA・1 DAY AGO
OnlyHomers

There have been a number of sad reports coming out of the world of professional wrestling in recent weeks, with former stars passing away, both during their career and following it.
1 DAY AGO