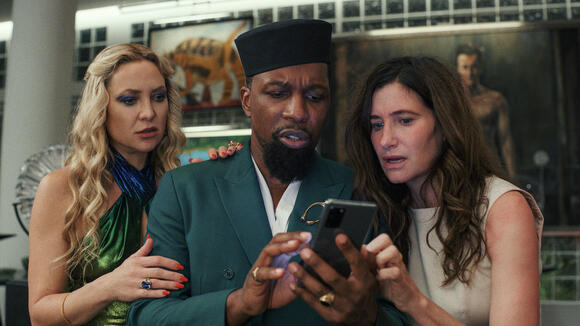 Daniel Craig may be back in action as Benoit Blanc in Glass Onion: A Knives Out Mystery , but he’s the only holdover character from the first Knives Out movie. Among the new faces surrounding the Southern detective this time around are Kate Hudson and Kathryn Hahn, who respectively play Connecticut governor Claire Debella and fashion designer Birdie Jay. Glass Onion was also the first time in a while that Hudson and Hahn got to share screen time , which the former described as “the best.”

Kate Hudson and Kathryn Hahn previously starred together in How to Lose a Guy in 10 Day s, with Hudson starring opposite Matthew McConaughey as Andie Anderson, and Hahn appearing as Andie’s friend, Michelle. Working on the romantic comedy resulted in the two actresses building a real-life friendship, and as Hudson told THR , she was delighted to reunite with Hahn in a different kind of cinematic setting. In her words:

Life certainly is filled with people whom we are quite close to for a period, but then uncontrollable circumstances result in the going of separate ways. Sometimes we never see these individuals again, but fortunately for Kate Hudson and Kathryn Hahn, thanks to their shared profession, this didn’t happen. Not only was Hudson glad to be paired back up with Hahn in Glass Onion: A Knives Out Mystery , but despite these two not having seen each other in years, it didn’t like any time had passed between them.

Although Kate Hudson and Kathryn Hahn once again find themselves playing friends in Glass Onion: A Knives Out Mystery , this is a far cry from the story we got in 2003 with How to Lose a Guy in 10 Days . Claire and Birdie are among the individuals who are invited to tech mogul Miles Bron’s private island for a vacation weekend getaway involving a faux murder mystery, only to find themselves suspects in an actual murder. The actresses’ Glass Onion castmates include Edward Norton, Janelle Monáe,  Leslie Odom Jr., Jessica Henwick, Madelyn Cline and Dave Bautista. Rian Johnson handled writing directorial duties, just like he did on the first Knives Out and will do with the upcoming Knives Out 3 .

While Netflix subscribers will have to wait until December 23 to stream Glass Onion: A Knives Out Mystery , the 2022 movie release is currently playing in theaters until Tuesday, November 29. The sequel has earned critical acclaim from professional reviewers , including CinemaBlend’s own Mike Reyes giving it a perfect 5 out of 5 stars in his review . Those of you who have already seen Glass Onion should read our ending breakdown .

Batgirl was scrapped by Warner Bros. but Leslie Grace still has memories of working with Brendan Fraser.
2 DAYS AGO
Cinemablend

A key piece of information about the Frasier revival has been revealed that will make it a lot easier to have crossovers with the Cheers characters.
MASSACHUSETTS STATE・23 HOURS AGO
Cinemablend

Shotgun Wedding: 12 Thoughts I Had While Watching The Jennifer Lopez Rom-Com

I watched Jennifer Lopez's Shotgun Wedding, and it brought up several thoughts for me.
22 HOURS AGO
Cinemablend

Ben Stiller Had Split Up With Christine Taylor. Then The Pandemic Changed Everything

Ben Stiller reveals how the COVID-19 pandemic changed his relationship with Christine Taylor.
6 HOURS AGO
Cinemablend

Rachel Brosnahan recalls the "delightful" way she helped the Marvelous Mrs. Maisel crew reduce their stress while filming Season 2.
1 DAY AGO
INSIDE News

While Marc Anthony and Nidia Ferreira's wedding was taking place, Jennifer Lopez and Ben Affleck could be seen having a heated argument while wearing ball gowns at the premiere of the new JLO movie.
22 HOURS AGO
Distractify

“King of Pop” Michael Jackson’s family has been all over the news lately. The late pop star’s ex-wife Lisa Marie Presley passed away on Jan. 12. His daughter, Paris Jackson, attended the Los Angeles premiere of the documentary Pamela, a love story on Monday, Jan. 30. And that same day, Michael’s son Prince Jackson congratulated cousin Jaafar Jackson on his role as the “Thriller” singer in the upcoming biopic Michael. But what about Michael’s other son? Where is Blanket Jackson now?
LOS ANGELES, CA・2 DAYS AGO
Cinemablend

Jon Bernthal’s TV Series Just Got Canceled. Coincidentally, Daredevil Is About To Start Filming For Disney+

Could the end of Jon Bernthal's series mean the return of The Punisher?
2 DAYS AGO
Cinemablend

Dave Bautista apparently can't get cast in a romantic comedy, but there are a lot of fans who want to see it, and writers who want to make it happen.
1 DAY AGO
Cinemablend

Michael B. Jordan returned as Killmonger in Black Panther 2, but Creed III ended up being a factor in making it happen.
2 DAYS AGO
Cinemablend

After getting his Kim Kardashian tattoos removed, Pete Davidson shaved his head.
1 DAY AGO
Cinemablend

Goonies 2? What The Cast And Steven Spielberg Have Said About A Sequel To The Classic Over The Years

The Goonies 2 has been talked about for nearly 40 years, what have those involved said about a possible sequel?
1 DAY AGO
Cinemablend

An insider drops details on where things stand between Olivia Wilde and Jason Sudeikis after their custody drama and more.
2 DAYS AGO
Cinemablend

After Big Little Lies, Nicole Kidman Is Returning To HBO For New Series

The CW has a huge cancellation bloodbath in the works, which could spell disaster for fans of Walker and The Winchesters.
2 DAYS AGO
Cinemablend

Russell T. Davies recently spoke about how returning to Doctor Who has given him comfort following the death of his husband Andrew Smith.
1 DAY AGO