Wooden heart: Furniture manufacturer fires its 2,700 workers by text and emails while they were ASLEEP two days before Thanksgiving, warns them not to come into work the next day - and has one driver arrested for taking furniture off truck

A Mississippi-based company that had become one of the largest furniture businesses in the country laid off nearly its entire workforce via email and text two days before Thanksgiving.

Approximately 2,700 workers, most of whom live in northeast Mississippi, with others in North Carolina and California, lost their jobs in the early hours of Tuesday. The digital announcement was made overnight, while many were sleeping.

Shortly after the heartbreaking announcement, one driver who was out on a delivery was arrested by cops in Mississippi and accused of attempting to remove furniture from his truck. He hasn't been identified, and no further details have been shared.

United Furniture Industries sent a memo via email and text to workers late Monday night informing them not to report to their shifts Tuesday. The layoffs come as economic experts predict a recession to hit in 2023.

The memo said the layoffs were made at the 'At the instruction of the board of directors … we regret to inform you that due to unforeseen business circumstances, the company has been forced to make the difficult decision to terminate the employment of all its employees, effective immediately, on Nov. 21.'

The memo did not offer any specific details about what led to the layoffs, merely referring to it as a 'difficult and unexpected situation.' Furniture Today, a trade publication, reported that United fired its chief executive, replacing him with current CEO Todd Evans. 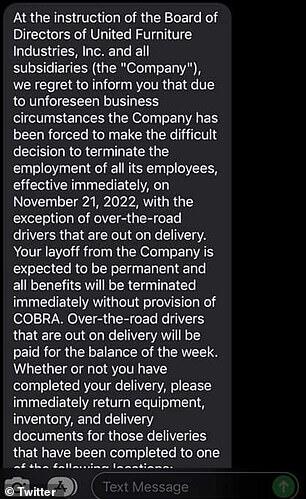 The company's chief financial officer and executive vice president of sales in June were also let go. Evans was the former president of Standard Furniture, an Alabama-based company.

A second email informed workers their 'layoff from the company is expected to be permanent and all benefits will be terminated immediately without provision of COBRA,' referring to the federal law that gives people who lose their jobs an option to keep their employer-sponsored health insurance coverage under some circumstances.

Some employees were sound asleep when the emails hit their inboxes. Others never saw the emails before heading to work.

Company drivers who were out making deliveries were told to return to a United Furniture location immediately to turn in their trucks, most were told that they would be paid through the end of the week.

The Daily Press reports that a United Furniture Industries driver was arrested in Monroe County, Mississippi, for allegedly attempting to remove furniture from his truck.

Audrey Garth, 37, is facing charges of grand larceny. Authorities say that they recovered furniture from a nearby parking lot in relation to the arrest.

At least one former employee, Toria Neal, has filed a lawsuit against her former employer saying that abrupt firing violated federal law as workers were not given the required 60 days' notice before the company ceased operations.

Neal had worked to UFI for more than eight years. She is accusing her former employers of being in violation of the Worker Adjustment and Retraining Notification Act.

An attorney representing Neal, Jack Simpson, told Freight Waves: 'Under the WARN Act, the employees of United Furniture were entitled to either a 60-day notice or 60 days of severance pay — neither of those were provided.'

Simpson added: 'If appointed class counsel, we look forward to vigorously investigating the actions of United Furniture and seeking as much compensation the terminated employees are legally entitled to.'

While another former employee told Freight Waves: 'We would go over to our friends’ houses and say, "Hey, that chair or that piece of furniture was made at our plant." We really took pride in our work — and this is how we are treated.'

In a separate interview, a former employee of the company's California operation, told VVNG: 'I don’t think any of us are prepared for this, especially right before the holidays. It will definitely affect my family and my immediate plans, and I don’t know who to turn to or what to do now.'

Lee County Administrator Bill Benson told the newspaper that the local community was caught off guard by the layoffs. Benson said: 'I know the board is ready to do anything it can to assist in the efforts of placing these folks.'

While in neighboring Monroe County, the Chamber of Commerce Executive Director Chelsea Baulch said: 'We’re heartbroken and in prayers for all of those affected. We’re working and partnering with our economic development friends at CDF, Three Rivers, the WIN Job Center and Accelerate MS to help deploy as many resources and available information on jobs and the rapid response.'

The company's communications team did not immediately respond to a request for comment.

Experts speculated that the company's demise could be tied to issues such as inflation, the ongoing situation in Ukraine and high gas prices, according to the Daily Press.

A former United consultant in the company's North Carolina operation, Robert Cottam, told Greensboro.com: 'Many furniture manufacturers were having gangbuster sales in 2021 with the pandemic. But, when those inflationary factors hit hard, it really put a squeeze on the discretionary spending of those who purchase promotional furniture.'

United Furniture Industries, based in Okolona, Miss., makes furniture under its brand and the Lane Home Furnishings brand, which it acquired in 2017 from Heritage Home Group LLC for an undisclosed sum. Lane was founded in 1912 in Virginia and merged with Tupelo-based Action Industries in 1972.

In July, the company laid off 490 employees.

This first message was sent on Monday night:

'We ask that all employees not report to their work locations tomorrow November 22, 2022.

Over-the-road drivers, whether or not you have completed your delivery, please immediately return the equipment, inventory, and delivery documents for those deliveries that have been completed to one of the following locations: Winston-Salem, NC, Verona, MS, or Victorville, CA.

A second message went out to workers on Tuesday morning:

'At the instruction of the Board of Directors of United Furniture Industries, Inc. and all subsidiaries (the "Company"), we regret to inform you that due to unforeseen business circumstances the Company has been forced to make the difficult decision to terminate the employment of all its employees, effective immediately, on November 21, 2022, with the exception of over-the-road drivers that are out on delivery.

Your layoff from the Company is expected to be permanent and all benefits will be terminated immediately without the provision of COBRA.

Over-the-road drivers that are out on delivery will be paid for the balance of the week. Whether or not you have completed your delivery, please immediately return the equipment, inventory, and delivery documents for those deliveries that have been completed to one of the following locations: Winston-Salem, NC, Verona, MS, or Victorville, CA location.

To be clear, do not complete any additional deliveries. We regret that this difficult and unexpected situation has made this necessary. Additional information will be provided shortly. Thank you for your service and dedication.'

Greed will get you nowhere in life. That's what this is. The company was sold they laid off every employee and weren't told a thing . It's was all in the making, the employees didn't know but ppl in office knew of this years ago . Trust me if you hear any rumors of your company going out of business or being sold you better take heed to it . These companies will have working to make their last dollars up until its time for them to shut down . The reason they don't give 30 or 60 day notice is because within that time ppl will quit and find something else and the company was planning to close 2 or 3 months down the road if they give if notice who will they get to run the company because they want to make every little penny they can until closure

Board of directors needs to be held accountable down to the last cent. what ever they own becomes their former employees property. This is so wrong. There is a special place for people like this . Hell

the board of directors decided to gut the company, sell its assets and take the money and run..

The DNC approved the reordering of its 2024 presidential primary, replacing Iowa with South Carolina in the leadoff spot as part of a major shake-up meant to empower black voters.
IOWA STATE・1 DAY AGO
Daily Mail

A high school swimmer from New Jersey was disqualified from a race for wearing an American flag on his cap in honor of his grandfather who was killed in the September 11 terror attacks.
MORRISTOWN, NJ・1 DAY AGO
Daily Mail

Indiana priest says he was cured of brain cancer during pilgrimage to Lourdes France, after surgery

A priest from Indiana, Fr. John Hollowell claims to have been cured of a brain tumor after making a pilgrimage to Lourdes, France in June 2022. Lourdes is a well-known pilgrimage site.
INDIANA STATE・1 DAY AGO