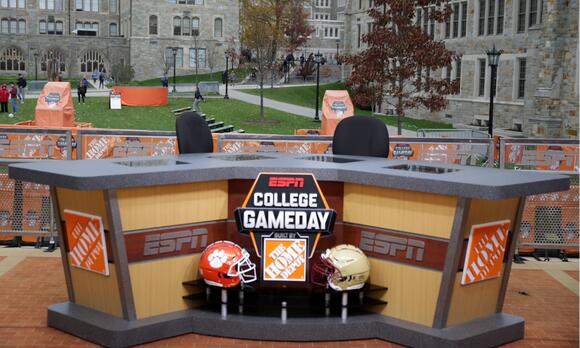 The 2022 NCAA football season is winding down, along with College GameDay , but the morning show is still cranking out all-star guest pickers. This week, the crew made their way to Ohio State for the second time this year, marking the record 22nd visit to Columbus.

In addition to the iconic voices of Rece Davis, Desmond Howard, Kirk Herbstreit, Lee Corso, Pat McAfee, and David Pollack, College GameDay will welcome NFL legend and Ohio State grad AJ Hawk to the booth as the guest picker. In a video posted to Twitter announcing the guest picker, Pat McAfee could barely contain his excitement.

“The crowd is ready. It’s cold. They’re out here ready to rock. And AJ Hawk, the all-time leading tackler for the Green Bay Packers, a Super Bowl Champion, College Football National Champion right here at Ohio State, will be our guest picker,” he said, his nose almost pressed against the camera lens.

“Should be an amazing day for College GameDay ! We’ll see you on ESPN. What a joke of a life, I cannot believe I’m here. Luckiest of all time.”

Admittedly, this isn’t far from Pat McAfee’s baseline in terms of energy and excitement. He’s a tad more amped this week, however, as AJ Hawk isn’t just a fantastic choice for College GameDay guest picker but a close personal friend of McAfee as well.

After 11 seasons in the NFL, AJ Hawk retired from an exceptionally illustrious career in 2017. In that same year, he joined Barstool’s Laces Out podcast alongside former Indianapolis Colts punter Pat McAfee. By 2018, Laces Out had already come to an end, but their intertwined career in entertainment was far from over.

That same year, McAfee started the Pat McAfee Show , which evolved over time into the podcast giant it is today. And, of course, one of his most frequent guests is his good friend AJ Hawk.

Though AJ Hawk has been dubbed “the most toxic person on the planet” and a “menace and danger to society” by Pat McAfee, he couldn’t adore the newest College GameDay guest picker more. Well, depending on the day. “I don’t know if we’d consider ourselves friends right now,” Hawk said on a 2021 episode of The Pat McAfee Show . “We’re probably on a trial basis right now, I think, for a little bit longer.”

“I think so, yeah,” Pat Agreed with a smirk. “I mean, you’re in an audition phase. Good luck making it to the next f—ing chapter, pal.”

Over 100,000 NFL fans signed a petition for Donna Kelce to do the coin toss at Super Bowl LVII between the Philadelphia Eagles and Kansas City Chiefs. Kelce is the mother of Eagles center Jason Kelce and Chiefs tight end Travis Kelce. A noted supporter and fan of both teams due to her sons, “Mama Kelce” was present at both team’s games this season.
PHILADELPHIA, PA・2 DAYS AGO
Outsider.com

Fox Sports will have just about every angle covered in Super Bowl LVII at State Farm Stadium in Glendale, Arizona.... The post Fox Sports Will Use a Jaw-Dropping Amount of Cameras and Microphones for Super Bowl Broadcast appeared first on Outsider.
GLENDALE, AZ・54 MINUTES AGO
Outsider.com

After reports surfaced that Kyle Busch had been detained while trying to get into Mexico in late January, the NASCAR... The post NASCAR’s Kyle Busch Releases Statement After Reports of His Arrest in Mexico Surface appeared first on Outsider.
NORTH CAROLINA STATE・48 MINUTES AGO
Outsider.com

Former Pittsburgh Steelers linebacker wondered why his phone was blowing up this weekend. Then he heard about the video ex-teammate and NFL wide receiver Antonio Brown posted. Brown took to social media recently to share that he believed James Harrison gave him CTE while the two were teammates in Pittsburgh. That’s a pretty dangerous allegation to make on Brown’s part.
PITTSBURGH, PA・1 DAY AGO
Outsider.com

Liam Neeson has a very particular set of skills, but that doesn’t stop him from being annoyed by the hijinks of UFC fighter Conor McGregor. In an interview with Men’s Health, the Taken star declared his loathing for fellow Irishman McGregor, comparing him to a “little leprechaun”. As one of the wealthiest athletes in existence, McGregor made history as the first UFC competitor to own two world titles simultaneously across different weight divisions.
2 DAYS AGO
Outsider.com

One race down, and a whole lot more to go. Kyle Busch and Austin Dillon finished in a strong third... The post Kyle Busch Reflects on First Race With Richard Childress Racing, New Teammate After The Clash appeared first on Outsider.
6 HOURS AGO
Outsider.com

Normally, there aren’t much fireworks in a game between a pair of Ohio Valley Conference squads who each have 7-16 records. But college basketball always finds a way to deliver, even in a game such as this. Late in the first half during the Eastern Illinois vs. Lindenwood game...
CHARLESTON, IL・2 DAYS AGO
Outsider.com

Former Pittsburgh Steelers quarterback Terry Bradshaw recently sat down in the hot seat. However, Bradshaw recently appeared on Who’s Talking to Chris Wallace, and Wallace asked him a tough question, if it ever gets under his skin that people may view him as dumb. “Yes. Oh, absolutely. Yeah, absolutely....
PITTSBURGH, PA・23 HOURS AGO
Outsider.com

Tom Brady likely will be spending more time with his three kids now that he’s retired from the NFL for a second time. But quitting football is going to impact everyone in the family. Like his father, Tom Sr, and his mother, Galynn. What are they going to do...
2 DAYS AGO
Outsider.com

Stephen A. Smith has made it known that he’d love to be the successor to Jimmy Kimmel. Still, that doesn’t mean he wasn’t nervous as he’s ever been when he filled in for the latter two years ago. Smith has been promoting his new book over...
5 HOURS AGO
Outsider.com

Well, Rupp Arena has lost one Blue Coat. The ushers are a staple at Kentucky basketball games, but one man just lost his gig. After the ESPN cameras caught Doug giving a rowdy group of Florida Gators fans the bird, the University of Kentucky stepped in. For those that aren’t...
LEXINGTON, KY・4 HOURS AGO
Outsider.com

Nobody will ever “send it” quite like Ross Chastain ever again. NASCAR recently banned the driver’s epic “Hail Melon” move at Martinsville, much to the dismay of race fans. Chastain, though, is taking it in stride. Chastain rode the wall and, quite literally, put the...
1 DAY AGO
Outsider.com

Former NFL tight end Kellen Winslow III, who is in prison for sex crimes, is seeking a reduction in his sentence, citing a new criminal reform law in California. The 39-year-old Winslow is representing himself and the petition he submitted was handwritten. But it spells out why he thinks this new criminal justice reform bill applies to his situation. He said he suffered physical trauma, possibly due due to CTE or a mild traumatic brain disorder. Winslow said that trauma played a part in the commission of his crimes. And because of that, “the court is required to impose the lower term (for sentencing considerations).”
CALIFORNIA STATE・2 DAYS AGO
Outsider.com

Good ole’ Florida, the state where go head-to-head with alligators, and people wrangle snakes on a daily basis. In this bizarre albeit unsurprising incident, a Florida man allegedly bit off the head of a pet ball python during a domestic dispute. According to reports via NBC Miami, police responded...
FLORIDA STATE・2 DAYS AGO
OnlyHomers

There have been a number of sad reports coming out of the world of professional wrestling in recent weeks, with former stars passing away, both during their career and following it.
1 DAY AGO