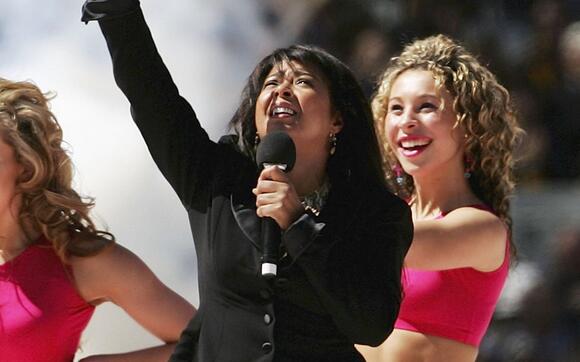 TAMPA, Fla. (WFLA) — Singer Irene Cara has died at her Florida home at the age of 63, according to her publicist.

Publicist Judith Moose announced Cara’s death on behalf of her family on the singer’s Twitter page.

“This is the absolute worst part of being a publicist,” Moose said. “I can’t believe I’ve had to write this, let alone release the news.”

Having worked as a performer since childhood, Cara rose to fame in 1980 after playing the role of Coco Hernandez in the movie “Fame,” singing both the title song and the hit single “Out Here On My Own.” According to her IMBD page, this was the first time two original songs from the same film were nominated in the same category.

After “Fame,” Cara would continue getting acting roles in various films and television shows, including “City Heat” where she starred with Clint Eastwood and Burt Reynolds in the role of Ginny Lee.

She also got national acclaim for singing and writing “Flashdance… What a Feeling” for the movie “Flashdance,” which landed her an Academy Award and Golden Globe for best original song and two Grammys in 1984.

Her publicist said Cara was still working on several projects before her death.

“We were working on amazing projects that would have made her and her fans incredibly happy,” Moose said. “Her manager and I will finish them. She’d want that.”

At this time, the cause of death is unknown. Moose said that information would be released once it is available.

Plans are being made for funeral services and a memorial for her fans at a later date.

“Irene’s family has requested privacy as they process their grief,” Moose said. “She was a beautifully gifted soul whose legacy will live forever through her music and films.”

RIP Irene Cara. I grew up watching Fame and Flashdance. She was one of my all-time favorites. My condolences to the family. What a sad year this has been

By🌍chance or better fate...I met her mother who invited me in her house. She was living in a humble little house 🏠 but she was very proud to show me pictures of her daughter❤️ Then I met Irene and shared my experience with her mother...peace love to both them🕊☮️🕊

Where is Harriet? Famous Florida eagle still missing from nest

Harriet, one of Florida’s most famous bald eagles has been missing since last week.
FLORIDA STATE・16 HOURS AGO
WFLA

Florida tops list for most shark attacks on Earth in 2022

Florida topped the global charts in the number of shark attacks last year, according to the University of Florida’s International Shark Attack File.
FLORIDA STATE・7 HOURS AGO
WFLA

The Powerball jackpot rose once more to $747 million Saturday night after the Feb. 4 drawing still had no jackpot winner.
FLORIDA STATE・1 DAY AGO
WFLA

"Today I learned that it's only a Texas thing to sell pickles at the movie theater and I can't decide if Texans are genius or just weird."
TEXAS STATE・2 DAYS AGO
WFLA

Two children who were kidnapped in Missouri nearly a year ago were found inside of a Florida grocery store on Wednesday.
HIGH SPRINGS, FL・2 DAYS AGO
WFLA

The man and woman, described as "racially motivated" extremists, were taken into custody last week, one in Maryland and the other in Florida, officials said.
BALTIMORE, MD・12 HOURS AGO
WFLA

A dead shark washed up frozen solid on a beach in Cape Cod, Massachusetts, over the weekend.
MASSACHUSETTS STATE・11 HOURS AGO
WFLA

Florida's special session includes immigration reforms, this time changing how the state responds to what it calls a surge of migrants entering the United States.
FLORIDA STATE・12 HOURS AGO
WFLA

The ride at an Iowa amusement park where an 11-year-old boy was killed in 2021 will never reopen, the park's owners said.
ALTOONA, IA・18 HOURS AGO
WFLA

Florida is the lightning capital of the United States. In 2022, there were more than 285 lightning events recorded per square mile.
FLORIDA STATE・11 HOURS AGO
WFLA

Two people are hurt and another two are in custody after a shooting at a strip mall in Land O' Lakes, authorities said.
LAND O' LAKES, FL・4 HOURS AGO
WFLA

TAMPA, Fla. (WFLA) — The Powerball jackpot rose once more to $747 million Saturday night after the Feb. 4 drawing still had no jackpot winner. The winning numbers for the 33rd drawing since November 2022 were 2, 8, 15, 19, 58, and Powerball 10. However, while there was no jackpot winner, the Powerball website said […]
FLORIDA STATE・1 DAY AGO
WFLA

TAMPA, Fla. (WFLA) — Federal law prohibits Americans from buying firearms if they use drugs, even in states like Florida where medical marijuana use is legal. Now, multiple federal cases make the fate of firearms and fresh bud in Florida a topic the court still has to hash out. During the runup to the 2022 […]
FLORIDA STATE・5 HOURS AGO