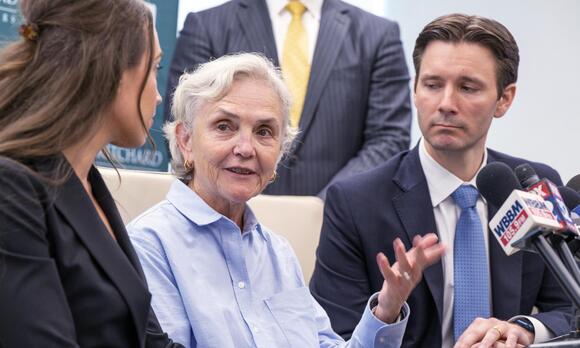 For more than 30 years, Susan Kamuda lived with her family several hundred yards away from an unassuming brick building situated in a small office park.

Kamuda’s son, Brian, remembers riding his bike past the building on his way through the neighborhood; he later taught a girlfriend to drive in the nearby parking lot.

Neither Kamuda nor the surrounding community knew that the building housed a company that was spewing a colorless gas into the skies above Willowbrook, a middle-class, suburban enclave south-west of Chicago. A company called Sterigenics used the gas, ethylene oxide (EtO), to sterilize medical devices and other products.

Related: These farmers have Parkinson’s disease – and claim a weedkiller is to blame

Susan Kamuda, now 70, was diagnosed with breast cancer in 2007, despite having no history of the disease in her family. Last year, Brian, 49, learned the debilitating pain he had been suffering in his back and hips – pain he assumed came from kidney stones – was instead stage four non-Hodgkin lymphoma.

There are 19,000 people living within a mile radius from the plant, as well as four schools. The Kamudas know of many others who have fallen sick, but only in recent years did they come to believe there was a connection to the Sterigenics building.

Susan and Brian have been prominent figures in the push to charge Sterigenics with responsibility for illnesses in the community. It operates numerous other such plants in the US and around the world.

“The hardest part right now is waiting every three months to see how much longer I have to live,” said Brian, who has endured multiple cycles of aggressive chemotherapy and other treatments, and is tested every few months as doctors monitor the progression of his disease.

“In darker times I think about how many years have been taken off my life between the cancer and the treatment,” he said.

Until last week, the question of Sterigenics’ culpability had seemed settled. It had been cemented when Susan Kamuda sued Sterigenics and was awarded $363m by an Illinois jury – the highest jury verdict on record for an individual plaintiff in Illinois. Hundreds of others are also taking the company to court.

But in a striking reversal, jurors in the second trial against the company found on Saturday that it was not liable for the cancer diagnosis of another area resident, Teresa Fornek, in a lawsuit she brought against Sterigenics.

Sterigenics said in an email that the Kamuda verdict was not based on evidence.

“We will continue to vigorously defend against allegations about our ethylene oxide operations and emissions,” said a company spokesperson.

This means the concerns around EtO are far from settled.

EtO has been associated with an increased risk for cancer since the 1970s. The Environmental Protection Agency (EPA) says that the greatest cancer risk is for people who have lived near a facility that has released EtO into the air for many years.

Records show that regulators were concerned about the health risks associated with EtO when Sterigenics quietly moved into Willowbrook in 1984. That year Illinois environmental officials sent the company a letter warning that the facility could expose people living within a mile from the facility to EtO concentrations 14 times higher than amounts then considered safe.

Even so, Mayor Frank Trilla said that few people thought much about Sterigenics or suspected it was pumping gas into the air.

Over the years residents reported all kinds of health problems.

Less than a mile from the Sterigenics building stands Hinsdale South high school, where Jim Crandell and his wife Kerri Crandell taught for two decades.

In 2015, Jim’s skin began erupting in rashes and pustules. Doctors determined the symptoms were a result of chronic lymphocytic leukemia.

Kerri, who taught physical education, was diagnosed with breast cancer in 2002. She also experienced two miscarriages and the death of a premature baby.

Crandell said teachers took note of the disproportionate number of miscarriages and rates of breast cancer they experienced.

Regulatory knowledge of the health risks grew over time. Based on animal studies and a study of more than 18,000 workers at 17 sterilization plants, EPA officially concluded in 2006 that EtO was a human carcinogen.

But for 10 years, while scientists reviewed those findings, the agency did not update its standards to reflect the risk the compound posed. In 2016, the EPA announced that the cancer risk for adults breathing EtO was 30 times greater than it had previously thought, and changed EtO’s descriptor from “probably carcinogenic to humans” to “carcinogenic to humans”.

It was only in 2018 that the Willowbrook community learned of the possible danger, when government officials published a report indicating residents living near the Sterigenics facility faced elevated risks of cancer and discharge from the facility.

The city ordered independent air testing that found airborne concentrations of EtO reached as high as 320 micrograms per cubic meter of air outside the village police station. (According to the Agency for Toxic Substances , an arm of the Centers for Disease Control, residential exposure to 2.1 micrograms of ethylene oxide per cubic meter of air over 33 years triggers elevated risks of cancer.)

Regulators determined those living in census tracts surrounding the facility face some of the nation’s highest cancer risks from toxic air pollution; the risk of cancer in one census tract was more than nine times the national average .

Residents were outraged after news of the cancer risk emerged. Those who attended a community forum recall a building sense of fear and anger as representatives from Sterigenics tried to downplay the concerns. The residents, meanwhile, one by one shared stories about how they or their loved ones had been diagnosed with cancer.

“It was the beginning of this realization for me that it is not normal to know this many people with cancer,” said Lauren Kaeseberg, an area resident who lost her mother to cancer in 2010.

After the allegations about Sterigenics emerged, the community held a candlelight stroller protest in honor of those who lost babies and suffered miscarriages.

Kamuda filed a lawsuit against Sterigenics in 2018, accusing the company of causing her cancer by pumping more than 1m lbs of ethylene oxide into the air around Willowbrook. The company failed to analyze how long the chemical would stay in the air and the distance it would travel, and failed to install emission controls, her lawsuit alleged.

She has been joined in the allegations by hundreds of others – including her son.

This past summer, Kamuda became the first in her community to bring Sterigenics to trial. Lawyers for Sterigenics, its parent company Sotera Health, and its corporate predecessor Griffith Foods, argued that Sterigenics did not release chemicals at dangerous levels, and questioned the evidence that emissions from Sterigenics caused Kamuda’s cancer.

But the five-week trial concluded in September with a jury verdict awarding Kamuda $363m, including $325m in punitive damages, a total that exceeded the amount her attorney had suggested in closing arguments.

“It was a resounding, complete win. No equivocation, no compromise,” said her attorney Patrick Salvi.

Yet the outcome of the second case, in which Sterigenics was exonerated, has deepened questions around the fate of the other lawsuits. As before, Sterigenics argued that it never emitted more than was permitted , and that the amount of EtO was not large enough to cause serious illness.

Brian’s trial against the company is set for April. Nearly 800 other plaintiffs have lawsuits pending and Sterigenics said it plans to defend against all allegations about its operations and emissions.

As their lawsuits hang in the balance, questions are swirling around other Sterigenics facilities.

In 2019, the Illinois EPA shut down the Willowbrook facility due to elevated cancer risks, and later that year Sterigenics closed it permanently.

The Crandells – the residents who worked at a local high school – and other members of a “Stop Sterigenics” community group are now working with communities in other states to advocate against Sterigenics and its use of EtO. The company continues to operate 48 other facilities in 13 countries and nine states across the US.

Tony Adams, who lives less than a mile from a Sterigenics facility in suburban Atlanta, has been helping lead the fight in Georgia.

The Sterigenics site there has been at the center of state hearings and legal battles. Close to 100 people have sued the company in Cobb county, Georgia, including 68 who allege they developed breast cancer as a result of their exposure to the gas, according to local news reports.

The Atlanta area plant was closed briefly, but reopened in 2020 after the company claimed its closure would worsen the nation’s shortage of medical supplies during the Covid-19 pandemic.

“It’s like sipping cyanide,” Adams said. “We’re choosing how much poison we’re allowing to be released into our communities. You can be pro-business, but you need to play a role in choosing who to let in.”

When does common sense prevail? Corporations know All About their products LIABILITY'S. WHEN do we decide to protect people, not Corporate profit?

It's simple. Either the gas is recaptured or the plant doesn't operate. The environment's air isn't theirs to pollute.