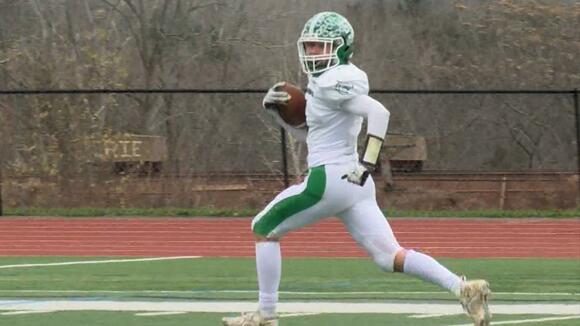 The dream season came to an end for the Cadets as they fell in their first state semifinal game in program history.

Union-Endicott scored on their first possession, but Jeffrey Broadnax answered with a rushing touchdown to even the game at 7.

With eight minutes to play, Hilton embarked on a promising drive until Latrail Jones stripped a Cadet receiver after a long reception. The Tigers turned the fumble into a touchdown to lead 14-7.

The Cadets responded with a touchdown of their own as Colton Thorp connected with Robert Lowry on 4th and 8 to even the game 14-14 with less than three minutes in the half.

The Tigers marched right down the field and Jaheim Jackson caught a wide-open touchdown from Max Sementelli to give U-E a 21-14 lead at the break.

After a scoreless third quarter, the Tigers finally got the insurance they were looking for as Anthony Lang punched in a four-yard touchdown run to seal the game. Hilton was stopped on fourth down twice in the final quarter.

Hilton (11-2) saw their eleven-game winning streak get snapped. This was the Cadets’ first appearance in the state semifinals after winning their third Section V title in program history, their first since 1994.

The Pembroke Dragons won the first NYSPHSAA 8-man regional championship game in history with a dominant performance over Groton.

Tyson Totten had another monster game for the Dragons, carrying the ball 29 times for 275 yards and three touchdowns.

“It means a lot,” Totten told the NYSPHSAA after the win. “All the hard work paid off. It’s awesome.”

Totten scored Pembroke’s first two touchdowns of the game with quarterback Cayden Pfalzer running in for their third score of the first half for a 22-6 lead at the break.

“It’s a special thing,” Pembroke head coach Brandon Ricci told the NYSPHSAA. “A couple of years ago we had eleven guys sign up for football. The program was left for dead. To see where it is now, knowing my own boys will have a dragon on their helmet to play someday, I couldn’t be more proud.”

Pembroke (12-1) will add the regional title alongside their first-ever Section V title they won earlier this month. This is the first year that a regional championship has been held in New York for 8-man football.

Mikey Valent leads all of Section V with 30 goals on the season
TOWN OF PITTSFORD, NY・1 DAY AGO
News 8 WROC

24 girls wrestlers from Section V will compete in the event
CANANDAIGUA, NY・2 DAYS AGO
News 8 WROC

ROCHESTER, N.Y. (WROC) — Webster artist Anthony Caruso created an oil painting to honor Buffalo Bills safety Damar Hamlin. Hamlin went into cardiac arrest and collapsed on the field during a game against the Cincinnati Bengals on January 2. He was released from the hospital in time to attend the team’s January 22 game, in […]
WEBSTER, NY・2 DAYS AGO
News 8 WROC

ROCHESTER, N.Y. (WROC) — A documentary film called “63 Hours” had its premiere at Ide Volkswagen Friday night. Monroe County Sheriff Todd Baxter is featured in the film, and it recounts him and a team of racers going down the Baja California strip in The Baja 1000. Baxter and the team, ‘Base Camp Off Road‘ […]
MONROE COUNTY, NY・1 DAY AGO
News 8 WROC

ROCHESTER, N.Y. (WROC) — Members of the Rochester Police Department’s bomb squad made a special delivery Thursday night — in the name of education and advancements in technology. Students from East High, School Without Walls, School of the Arts and Edison Career and Tech High make up the ROC City Robotix Team. Those we spoke […]
ROCHESTER, NY・2 DAYS AGO
News 8 WROC

Pittsford Library wraps up Living the Dream series on MLK

ROCHESTER, N.Y. (WROC) — The Pittsford Library held their final event of their “Living the Dream” educational series Saturday. The series teaches kids about Dr. Martin Luther King’s legacy and the fight for racial equality. Former Town of Pittsford Board member Kevin Spencer Beckford is the creator of Living the Dream, as well as the […]
TOWN OF PITTSFORD, NY・17 HOURS AGO
News 8 WROC

First refuse district in Irondequoit could be coming in 2024

Stay up to date on the latest headlines in today's Sunrise Smart Start for Thursday, January 26, 2023.
ROCHESTER, NY・3 DAYS AGO
News 8 WROC

Fire crews are currently tending to a call for a fire at a house on Sawyer Street.
ROCHESTER, NY・1 DAY AGO
News 8 WROC

ROCHESTER, N.Y. (WROC) — The Town of Irondequoit held a public presentation Thursday evening to detail 2023 reassessment plans. Officials say the reassessment will make sure properties’ assessed values match their market values. Town leaders say they have not done a market evaluation since 2018, and property values have increased since then. Budget information from […]
IRONDEQUOIT, NY・2 DAYS AGO
News 8 WROC

ROCHESTER, N.Y. (WROC) — It’s not just the lack of snow that’s been having an effect on the community, but the lack of ice on Lake Ontario has been having an impact as well, and it goes beyond the winter activities that require snow. The snowflakes may have been flying this week, but ice cover […]
1 DAY AGO
News 8 WROC

ROCHESTER, N.Y. (WROC) — The University of Rochester Warner School’s Center for Urban Education Success held an event to discuss improving school systems for underserved communities Wednesday evening. The discussion took place at East High School —a school that was once struggling, but has since drastically improved their graduation rate after partnering with the University […]
ROCHESTER, NY・3 DAYS AGO