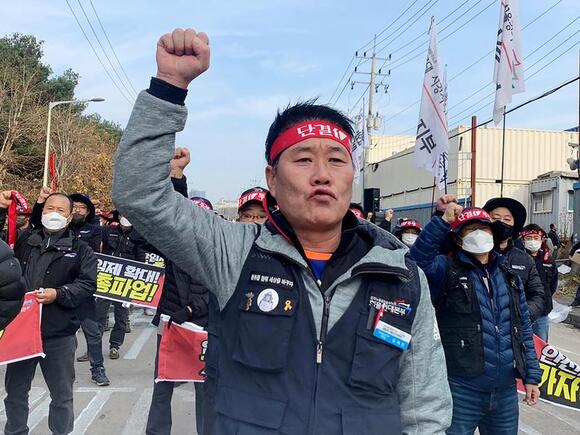 SEOUL (Reuters) -South Korea’s transport ministry plans to meet with the striking truckers union on Monday for negotiations, a ministry official said on Saturday, with the impact of the strike expected to more keenly felt through the country early next week.

“We are ready to talk about reasonable demands of the trucker union at any time and will make efforts to solve the issues,” the ministry said in a statement on Saturday, adding it expects to see the effects of the action across industries such as steel by early next week.

Damage is already visible at construction sites, while workers at Hyundai Motor’s Ulsan factory are delivering new cars by driving them directly to customers.

A union official confirmed Monday’s meeting, which would be the first official dialogue between the two sides.

The transport ministry said about 5,000 people took part in the strike on Saturday in 136 locations nationwide, down from 9,600 on the first day of the strike.

The transport ministry expressed concerns about disruption in the supply of gasoline and kerosene if the strikes are prolonged, as about 80% of truckers carrying oil products for major refiners such as SK Innovation’s SK Energy and S-Oil Corp are members of the trucker union.

The cement industry estimated an output loss of about 37 billion won ($27.7 million) as of Friday, said lobby group Korea Cement Association. It added that the industry only managed to ship about 20,000 tonnes of cement on Friday, about 10% of usual daily shipments.

South Korean President Yoon Suk-yeol warned on Thursday that the government would consider various options, such as issuing an order to break up the strike, calling it an illegal and unacceptable move to take the national supply chain “hostage” during an economic crisis.

According to South Korean law, during a serious disruption to transport the government may issue an order to force transport workers back to their jobs. Failure to comply is punishable by up to three years in jail, or a fine of up to 30 million won ($22,550).

SEOUL, Feb 9 (Reuters) - The rising cost of living is likely to hurt South Korea's economy much more significantly in the first half of this year than previously thought, its top government research agency said on Thursday.
2 HOURS AGO
msn.com

Disclaimer: We adhere to strict standards of editorial integrity to help you make decisions with confidence. All links marked with an asterisk ( * ) are paid links. The Fed’s interest rate decision, the Labor Department’s jobs report and corporate earnings have been dominating headlines lately. But in this day and age, you might also want to pay attention to the ongoing war between Russia and Ukraine — because the consequences could be dire.
1 DAY AGO
Business Insider

Marjorie Taylor Greene suggested the Pentagon may have withheld information about Chinese spy balloons from Trump, and called for an investigation.
GEORGIA STATE・1 DAY AGO
Business Insider

WASHINGTON, Feb 8 (Reuters) - U.S Secretary of State Antony Blinken said on Wednesday the United States has shared information it has obtained about China's spy balloon with dozens of countries around the world.
WASHINGTON STATE・9 HOURS AGO
Reuters

AZAZ, Syria, Feb 6 (Reuters) - Syrian toddler Raghad Ismail was rushed to safety from the rubble of her home after it collapsed in a huge earthquake that has wreaked devastation in Syria and Turkey. But most of her family, including her mother, did not make it out alive.
2 DAYS AGO
Reuters

WARSAW, Feb 8 (Reuters) - Western partners could deliver the first battalion of Leopard 2 battle tanks to Ukraine in the first three or four months of this year, German Defence Minister Boris Pistorius said on Wednesday on a trip to the Polish capital.
13 HOURS AGO
Reuters

Putin approved supply of missiles that shot down MH17 in 2014, investigators say

AMSTERDAM, Feb 8 (Reuters) - The international team investigating the 2014 downing of Malaysia Airlines Flight 17 (MH17) by a missile has convincing evidence that Russian President Vladimir Putin personally signed off on a decision to allow the Russian missile system into Ukraine, Dutch prosecutors said on Wednesday.
16 HOURS AGO
Reuters

Swedish PM ready to restart talks with Turkey when Ankara is

TALLINN, Feb 7 (Reuters) - Swedish Prime Minister Ulf Kristersson said on Tuesday he was ready to restart stalled negotiations over Sweden's application to join NATO as soon as Turkey was.
1 DAY AGO
Reuters

Feb 7 (Reuters) - The construction of protective structures for key facilities at the Zaporizhzhia nuclear plant in southeast Ukraine is nearing completion, Russia's state TASS news agency reported on Tuesday, citing an adviser to the head of Russia's nuclear plants operator.
2 DAYS AGO
Reuters

ZURICH, Feb 6 (Reuters) - Switzerland is close to breaking with centuries of tradition as a neutral state, as a pro-Ukraine shift in the public and political mood puts pressure on the government to end a ban on exports of Swiss weapons to war zones.
2 DAYS AGO
Reuters

WASHINGTON/BEIJING, Feb 6 (Reuters) - The U.S. Coast Guard on Monday imposed a temporary security zone in waters off South Carolina during the military's search and recovery of debris from a suspected Chinese spy balloon that a U.S. fighter jet shot down.
WASHINGTON STATE・1 DAY AGO
Reuters

WASHINGTON, Feb 8 (Reuters) - The U.S. Treasury Department imposed sanctions on Wednesday on two members of the international criminal gang MS-13, accusing them of involvement in drug trafficking and murder in Central America and the United States.
WASHINGTON STATE・13 HOURS AGO
Reuters

Feb 7 (Reuters) - Russia has demanded that the U.S. embassy in Moscow stop spreading what Moscow regards as fake news regarding its military operation in Ukraine and has threatened to expel U.S. diplomats, the TASS news agency reported on Tuesday.
1 DAY AGO