Crypto Is Full Of FTX's Bankman-Fried 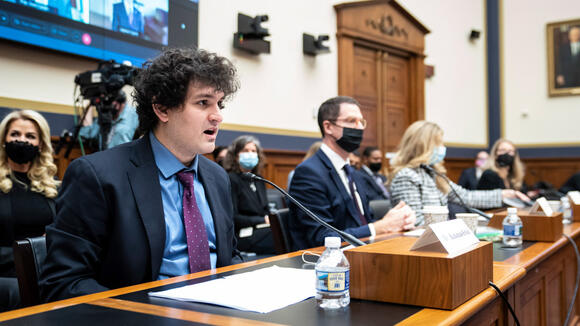 Within the common business phrase ESG, standing for environmental, social and governance, one of the letters could have sounded the alarm about FTX.

This is the letter G, which stands for governance or good-governance practices.

It can mean diverse C-suites and diverse investor pools, welcoming people from different social and economic backgrounds and color and gender minorities to the table. Put another way, it means avoiding one-size-fits-all among those who run businesses and those who write the big investment checks to enable entrepreneurs to bring their ideas and visions to fruition.

Unfortunately, there wasn’t enough G among those who signed the checks to Sam Bankman-Fried, the fallen founder of FTX, who dazzled the entire industry without anyone ever asking him the tough questions.

Big investors were impressed by Bankman-Fried's bravado, his "I-know-what-I-am-doing" attitude and his “I-am-different-from-others" demeanor.

Bankman-Fried had adopted a posture, nourished by the current philosophy of Effective Altruism, omnipresent within Silicon Valley and the prestigious universities. The EA ideology boils down to "the most good can be done by choosing to make the most money possible in order to give it all away." Earn-to-give is the community’s leitmotif.

The FTX debacle shows that those who sign the checks are inspired by those who look like them, who have been to the same schools as them, who come from the same socioeconomic backgrounds as them, who share their realities. If you're different, you're almost out of luck.

The problem here is that this approach creates a lot of Bankman-Frieds. The crypto industry is teeming with them.

After his fall, the crypto space closed ranks, and the message that emerged is that one bad apple doesn't mean that other apples and the tree are bad. By this rule Bankman-Fried is an isolated case, a single bad actor, and the show must go on as if nothing happened.

But what will it take for the crypto industry to challenge itself? Ten Bankman-Frieds collapsing at the same time?

Elon Musk, the visionary entrepreneur who is CEO of Tesla (TSLA) - Get Free Report, put his finger on the problem when he mocked the venture-capital firm Sequoia Capital, one of the kingmakers in Silicon Valley and one of the main investors in FTX.

Here is a partial account of a meeting between Bankman-Fried and Sequoia Capital in July 2021. FTX wanted to raise funds and Sequoia believed that the opportunity to do business with the wonder boy was too good to pass up.

The account is based on an article by journalist Adam Fisher, commissioned by Sequoia. The article, published last September, was posted on the firm's website under "We help the daring build legendary companies.” It has since been removed.

"Of the exchanges that we had met and looked at, some of them had regulatory issues, some of them were already public,” Michelle Bailhe, a "young gun” at Sequoia Capital, told Fisher. "And then there was Sam.”

FTX and Bankman-Fried were, for Sequoia, "Goldilocks-perfect."

"We had a great meeting with Sam, but the last question, which I remember Alfred [Lin] asking, was, ‘So, everything you’re building is great, but what is your long-term vision for FTX?’" Fisher reported. Lin is a veteran partner at Sequoia.

Fisher continued: "Suddenly, the chat window on the Sequoia’s side of the Zoom lights up with partners freaking out. 'I LOVE THIS FOUNDER,' typed one partner. 'I am a 10 out of 10,' pinged another. 'YES!!!' exclaimed a third."

Risk Management Is the Biggest Loser

From the start, the die had been cast. Bankman-Fried preached to believers. The question seemed to be more about what amount Sequoia was going to write on the check.

No one posed tough questions to Bankman-Fried. These are just a few of the ones that the firm could've asked:

- How do you plan to build the infrastructure for your global app?

- What will make your platform compelling enough for people to abandon other platforms?

And last but not least:

- Is there just one scenario in which what you're selling us is going to fail?

An honest answer to this last question would have revealed the potential risks of the venture. But in the meeting that day, risk management was the big loser. Everyone seemed happy and eager to be in the same boat.

In October 2021, Sequoia signed a big check to FTX, bringing its valuation to $25 billion. Three months later, this valuation rose to $32 billion. Here is what we at TheStreet wrote on Feb. 1, 2022, a day after the announcement:

"The news will no doubt revive questions about the formation of a bubble in the cryptosphere: FTX Trading, one of the largest cryptocurrency exchanges, saw its valuation gain $7 billion in just over three months as the cryptocurrency market crashed."

"While the new valuation of FTX is a sign of VC-investor confidence in the cryptosphere, it will not comfort critics who see a crypto bubble."

Get Action Alerts PLUS + Quant Ratings investing insights for one low price.

Binance Has Some Bad News for Crypto Investors

Dell is planning big job cuts as PC market conditions “continue to erode with an uncertain future”.
2 DAYS AGO
TheStreet

The billionaire and global CEO is attacking the circles of power one after the other.
17 HOURS AGO
TheStreet

Elon Musk's Latest Tweet Is a Perfect Commercial for Cannabis

The billionaire entrepreneur has just posted a message that is unequivocal a support for cannabis.
CALIFORNIA STATE・2 DAYS AGO
TheStreet

Bed Bath &Beyond Stock Price Should Be Zero, Analyst Says

The retailer's equity value continues to decline despite an infusion of capital.
19 HOURS AGO
TheStreet

The outspoken CNBC host and contributor makes his case when asked which automaker stock he'd rather own.
1 DAY AGO
TheStreet

The money manager sees great promise in Tesla's ability to come up with an autonomous taxi platform in the next few years.
17 HOURS AGO
TheStreet

What Is the Sharpe Ratio? Definition & Formula

What Is the Sharpe Ratio?The Sharpe ratio was developed by American economist and Noble laureate William F. Sharpe. This ratio helps investors understand the risk-adjusted returns of their investments (in other words, the return on their investments compared to the risk taken to earn those ...
14 HOURS AGO
TheStreet

Activision's merger with Microsoft "will enable us to better serve our players, create greater opportunities for our employees, and allow us to succeed in an increasingly competitive global gaming industry,” said CEO Bobby Kotick.
1 DAY AGO
TheStreet

“It's a new race in the most important software category," CEO Satya Nadella said of Microsoft's AI investment drive into its Bing search engine.
WASHINGTON STATE・3 HOURS AGO
TheStreet

You might consider dividend stocks, which can provide regular income payments and potential capital gains.
1 DAY AGO
TheStreet

In two weeks Adani Group has lost more than $118 billion in market value, more than half its market capitalization.
2 DAYS AGO
TheStreet

Microsoft has invested billions in OpenAI, and is now revealing what the money is building.
17 HOURS AGO
TheStreet

The two major U.S. institutional investors have exposure to the Adani Group conglomerate.
2 DAYS AGO
TheStreet

Wood's flagship Ark Innovation ETF has slid 41% over the past year and 73% from its February 2021 peak.
20 HOURS AGO
TheStreet

Elon Musk Says the Past Few Months Have Been Hell

"I’m worried about me too," says the billionaire CEO, who is asking for "public support."
2 DAYS AGO