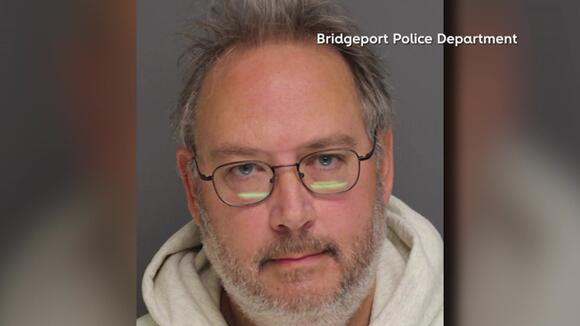 A man was arrested twice for stalking the same teenage girl online, according to police.

Christopher Green, of North Branford, is facing charges of electronic stalking and harassment.

He was arrested in September.

Shortly after, police say Green once again reached out to the same victim.

He was arrested for a second time Wednesday.

Lozada says it went right passed her refrigerator, where she and her daughters could easily have been standing nearby.
BRIDGEPORT, CT・4 HOURS AGO
News 12

Police say Sargunvir Sondhi was driving a Mercedes Benz eastbound around 5 a.m. when he smashed the back of a Nissan Sentra near Exit 51, causing the Mercedes to flip over.
DIX HILLS, NY・1 DAY AGO
News 12

Organizers tell News 12 they are still coordinating the event but want to hold it in the afternoon after church services, so as many people as possible can attend.
MEMPHIS, TN・23 HOURS AGO
News 12

The Ivy Kitchen and Bar on Wall Street and Nag's Head Ale House on New York Avenue were both issued multiple violations from the SLA and the Town of Huntington Fire Marshall.
HUNTINGTON, NY・11 HOURS AGO
News 12

White Plains police said they would have extra patrols out Friday night ahead of possible demonstrations.
MEMPHIS, TN・1 DAY AGO
News 12

New body cam video has been released showing the moments Tyre Nichols was brutally beaten by police during a traffic stop. He died three days later. One of the five former Memphis police officers charged in Nichols' death has ties to Connecticut. In the video, officers can be seen stopping...
MEMPHIS, TN・2 DAYS AGO
News 12

A woman who had $8,500 worth of property stolen from her hotel room in Shelton said she doesn’t care about getting any of it back except her hairless cat, Princess.
SHELTON, CT・2 DAYS AGO
News 12

Police: Man stole $20,000 worth of items from Southampton storage facility

Authorities say on New Year’s Day, a masked man hit 24 units at Life Storage on Mariner Drive before taking off in a dark colored SUV.
SOUTHAMPTON, NY・2 DAYS AGO
News 12

Suffolk Police Highway Patrol officers say they responded to a 911 call regarding debris in the roadway.
OYSTER BAY, NY・1 DAY AGO
News 12

Prosecutors: Selden woman embezzled over $340,000 from small business in Medford

The business says Leslie Mroz handled payroll and was able to pay herself over double her salary and make unauthorized contributions to her retirement fund and health insurance.
MEDFORD, NY・2 DAYS AGO
News 12

Video shows overturned vehicle on I-95 after crash

No one was injured in a crash on I-95 Friday morning that caused one vehicle to flip over. Police say a driver in the left lane crashed his vehicle into another driver whose car was suffering a tire problem in the center lane. The impact caused the second vehicle to...
MILFORD, CT・2 DAYS AGO
News 12

April Barron, of Bridgeport, says she will never forget the experience of seeing 27-year-old Lamar Nalley, of Hamden, being sentenced in court.
BRIDGEPORT, CT・2 DAYS AGO
News 12

Authorities say a 32-year-old woman was driving northbound on Wicks Road around 6:30 p.m. when she hit a pedestrian in the roadway at the intersection of Merill Street.
BRENTWOOD, NY・1 DAY AGO
News 12

Hudson Valley residents and the nation at large were shocked by the bodycam video of Nichols’s fatal beating.
YONKERS, NY・1 DAY AGO
News 12

Four apartments are unlivable due to smoke and heat damage.
NORWALK, CT・22 HOURS AGO
News 12

Our Lives: 'Peace by Piece' - Bridgeport author speaks on new book based on quilting group

Lizzy Rockwell is a quilter and author from Bridgeport. She wrote and illustrated a book based on the quilting group Peace by Piece: The Norwalk Community Quilt Project. News 12’s Gwen Edwards spoke to Rockwell about the book and her career.
BRIDGEPORT, CT・6 HOURS AGO
News 12

The group says they are uniting to show solidarity with Nichols's family and the Memphis community.
BRIDGEPORT, CT・2 HOURS AGO