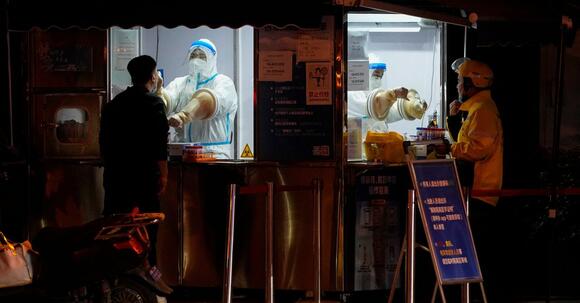 BEIJING, Nov 26 (Reuters) - China reported 35,183 new COVID-19 infections on Nov. 25, of which 3,474 were symptomatic and 31,709 were asymptomatic, the National Health Commission said on Saturday, setting a new high for the third consecutive day.

That compared with 32,943 new cases a day earlier – 3,103 symptomatic and 29,840 asymptomatic infections, which China counts separately.

There were no deaths, keeping fatalities at 5,232. As of Friday, mainland China had confirmed 304,093 cases with symptoms.

Mega-cities continue to struggle to contain outbreaks, with the southern city of Guangzhou and southwestern Chongqing recording the bulk of new cases.

I bet everyone lies about having symptoms because they don’t want to be whisked away to a Covid center. You can’t believe any information coming out of China.

wow. any number of Progressive health officials here could be sent to help them dream up mandates and lockdowns and doxxing and public shaming to help bring the little guy to heel...

BEIJING/HONG KONG, Feb 5 (Reuters) - China may respond to the U.S. shooting down its suspected spy balloon after warning of "serious repercussions", but analysts say any move will likely be finely calibrated to keep from worsening ties that both sides have been seeking to repair.
CALIFORNIA STATE・4 HOURS AGO
Reuters

Feb 3 (Reuters) - A U.S. jury on Friday found Tesla Inc (TSLA.O) and CEO Elon Musk not liable in a securities fraud case over a tweet that he had lined up funding to take the electric car company private.
2 DAYS AGO
Reuters

(Reuters) - The United States and Russia faced off on Saturday over a World Health Organization report on the humanitarian crisis in Ukraine, with Moscow saying it was politically motivated and Washington calling for it to be swiftly updated.
WASHINGTON STATE・1 DAY AGO
Reuters

Feb 6 (Reuters) - A look at the day ahead in Asian markets from Jamie McGeever. Traders in Asia can expect a choppy start to the week as they absorb Friday's sell-off on Wall Street following a freakishly strong U.S. jobs report and heightened geopolitical tensions after a U.S. fighter jet shot down a suspected Chinese spy balloon on Saturday.
4 HOURS AGO
Reuters

HONG KONG, Feb 6 (Reuters) - Sixteen Hong Kong pro-democracy figures face trial on Monday, more than two years after their arrest, in what some observers say is a landmark case for the city's judicial independence under a national security law imposed by Beijing.
WASHINGTON STATE・3 HOURS AGO
Reuters

SYDNEY, Feb 6 (Reuters) - The leader of Australia's most populous state on Monday unveiled a plan to make all poker machines cashless within five years to fight money laundering and problem gambling, setting up a political battle ahead of a state election next month.
NEVADA STATE・37 MINUTES AGO
Reuters

Feb 5 (Reuters) - China's finance minister and its central bank governor will attend a roundtable with other creditors and some borrowing countries in February in India, IMF Managing Director Kristalina Georgieva said in a CBS' 60 Minutes interview on Sunday.
WASHINGTON STATE・2 HOURS AGO
Reuters

NEW YORK, Feb 3 (Reuters) - Much stronger-than-expected U.S. job growth stopped early-year rallies in stocks and bonds dead in their tracks on Friday, forcing Wall Street to recalibrate expectations for how much more hawkish the Federal Reserve will need to be in its fight against inflation.
2 DAYS AGO
Reuters

Feb 5 (Reuters) - The United States is working to recover a suspected Chinese spy balloon that was shot down off the coast of South Carolina, according to a statement released by the Pentagon on Sunday.
SOUTH CAROLINA STATE・2 HOURS AGO
Reuters

Feb 5 (Reuters) - A day before a U.S. military jet shot down a suspected Chinese spy balloon off the country's Atlantic Coast on Saturday, Colombia's military confirmed a sighting of an airborne object similar to a balloon flying over its territory.
8 HOURS AGO