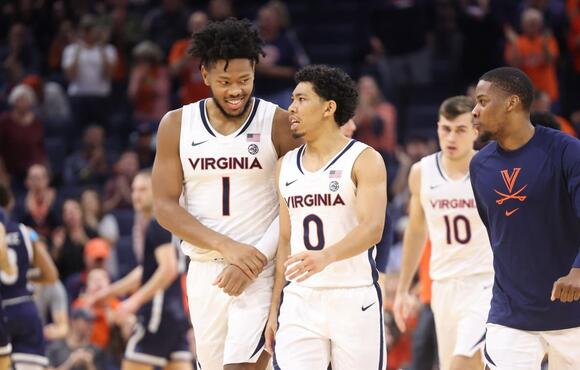 After leading Virginia in scoring last season, Jayden Gardner has seen his scoring average cut in half to start this season. Some of the drop-off was to be expected with the Cavaliers having more scoring options, but it was still surprising to see the Third-Team All-ACC selection score in double figures just once through the first four games of the season.

On Friday night, Jayden Gardner reminded everyone of his offensive talent, scoring 18 points in the first half alone and tallying a season-high 26 points to lead Virginia to a comfortable 72-45 victory over Maryland Eastern Shore to remain undefeated on the season.

In the postgame press conference, Tony Bennett said he challenged his team to be aggressive right from the jump. The pep talk worked as the Cavaliers scored the first eight points of the game and raced out to a 20-4 lead after eight minutes.

The visiting Hawks responded well to the early punch, taking advantage of a near-five minute scoring drought by Virginia to go on an 8-0 run to cut the deficit to 10 points. Maryland Eastern Shore settled into more of an offensive rhythm after that, but Jayden Gardner had a phenomenal first half to help UVA maintain a healthy gap on the scoreboard, making 9 of his 12 field goals for 18 points, which already surpassed his previous season-high of 12 points. Gardner finished with 26 points on 12/15 shooting and three rebounds. UVA ended the first-half on a 8-2 run to take a 40-22 lead into the halftime intermission.

Maryland Eastern Shore did well to limit UVA's perimeter-shooting. Virginia came in averaging nearly 10 threes per game on a 46.9% clip. Against UMES, UVA attempted only five threes in the first half and finished just 5/15 from beyond the arc, with three of those triples coming in the last couple of minutes of the game.

The Cavaliers knew they had a size advantage with the height-deficient Hawks running 6'5" forward Nathaniel Pollard Jr. at the center position for most of the game. The outcome was a 40-22 advantage in points in the paint for Virginia and a feast for Jayden Gardner and Kadin Shedrick, who made all four of his field goal attempts and finished with 13 points, three rebounds, two blocks, and three steals.

Both teams endured lengthy scoring droughts in the second half and Virginia maintained a sizable lead for the duration. Isaac McKneely knocked down back-to-back threes late in the game and Chase Coleman brought the JPJ crowd to its feet with a corner three in the final minute as the Cavaliers cruised to the 72-45 win.

Now 5-0 on the season, Virginia will play its first true road game of the season at Michigan on Tuesday at 9:30pm in the ACC/Big 10 Challenge.

See the full schedule of UVA sporting events for the upcoming week, including how to watch the Hoos online
CHARLOTTESVILLE, VA・1 DAY AGO
Cavaliers Now

UVA's head coach gives his thoughts on the release of the 2023 Virginia football schedule
CHARLOTTESVILLE, VA・1 DAY AGO
Cavaliers Now

Takeaways From the 2023 Virginia Football Schedule

Breaking down some key observations from the release of the 2023 UVA football schedule
CHARLOTTESVILLE, VA・2 DAYS AGO
Cavaliers Now

UVA is the favorite to win the ACC for the second-straight season and five Cavaliers were selected Preseason All-ACC
CHARLOTTESVILLE, VA・2 DAYS AGO
Cavaliers Now

Tony Elliott provided a few injury updates on players that will be out or limited for spring practice
CHARLOTTESVILLE, VA・1 DAY AGO