Broncos will be without receivers Jeudy, Hamler vs. Carolina 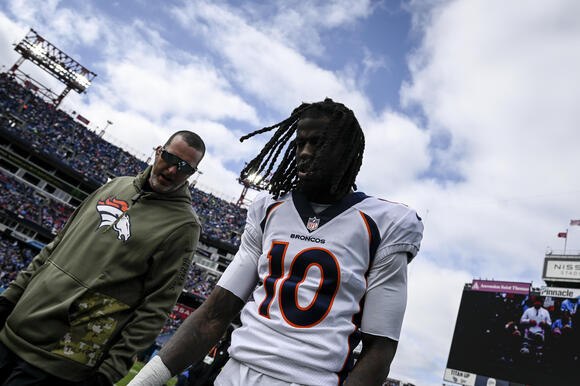 Russell Wilson and the Denver Broncos will be without receivers Jerry Jeudy and KJ Hamler for their game Sunday at Carolina.

Jeudy was ruled out Friday with an ankle injury and Hamler with a bothersome hamstring. The team also will be missing cornerback K'Waun Williams (wrist/elbow/knee) and defensive lineman Jonathan Harris (knee).

This will be the second straight game minus Jeudy and third in a row with Hamler on the sideline. Jeudy has caught three of Wilson's seven touchdown passes this season, while Hamler has provided a deep threat.

"Those guys are both very talented players," Broncos coach Nathaniel Hackett said Friday after practice. "We want them out there when we can get them healthy. But we have the guys that are ready to go and ready to rock, so we want to be sure that we're able to attack with those guys as well."

After making the conference championship game for a second time in as many seasons, Cincinnati Bengals suffered a tough loss to the Kansas City Chiefs following a costly penalty in the final seconds of the game that set up a game-winning field goal for the Chiefs. It wasn’t the outcome the team had hoped for, Read more... The post Joe Burrow reacts to loss with bold message appeared first on The Comeback: Today’s Top Sports Stories & Reactions.
CINCINNATI, OH・1 DAY AGO
Distractify

Travis and Jason Kelce's Parents on Sons Playing in Super Bowl LVII: "Neither One of Them Lose Very Well"

The Super Bowl matchup of every parent's (worst?) nightmare. NFL future Hall of Famers Jason and Travis Kelce will face off against one another in Super Bowl LVII on Feb. 12. The brothers — who play for opposing teams — the Kansas City Chiefs and the Philadelphia Eagles, respectively, will each try to help lead their team to victory and take home the Vince Lombardi trophy for their city.
1 DAY AGO
Yardbarker

The Pittsburgh Steelers and Philadelphia Eagles have been in the NFL since its inception. The two teams even briefly combined forces during World War II and called themselves the Steagles. The players and coaches didn’t like it then and the two fan bases don’t like each other now. Fans from the same state rarely get along and the vitriol was on display after the Eagles made their second Super Bowl in five seasons.
PHILADELPHIA, PA・1 DAY AGO
CBS Denver

By Josh Edwards(CBS SPORTS) - Sean Payton is set to become the next head coach for the Denver Broncos, according to CBS Sports NFL Insider Jonathan Jones. The New Orleans Saints and Broncos have finalized trade compensation for head coach Sean Payton, according to ESPN, removing the final hurdle for Payton to become Denver's next head coach.Adam Schefter adds that the trade calls for Denver's first-round pick from San Francisco (No. 30 overall) and a 2024 second-round pick will be sent to New Orleans for their 2024 third-round pick. Payton, 59, last coached for the Saints in 2021 but remains under contract, which is why a trade needs to...
DENVER, CO・8 HOURS AGO
CBS Denver

BOSTON – Former Patriots quarterback Tom Brady announced on Wednesday that he is retiring from the NFL "for good."One year after the Tampa Bay Buccaneers quarterback announced his first retirement, which was short lived, he tweeted that he is calling it a career."I'm retiring... for good. I know the process was a pretty big deal last time so when I woke up this morning, I figured I'd just press record and let you guys know first. So, I won't be long winded, you only get one super emotional retirement essay and I used mine up last year," Brady said in...
1 HOUR AGO
CBS Denver

The Miami Dolphins have reached a deal with former Denver Broncos coach Vic Fangio to become their defensive coordinator, a person familiar with the hire told The Associated Press on Sunday.The person spoke to The AP on condition of anonymity because the deal has not been finalized.Fangio, who had been one of the most sought-after defensive coordinator candidates this offseason, was Denver's head coach from 2019-21, going 19-30.The Dolphins fired defensive coordinator Josh Boyer after three seasons with the team.Miami finished the season ranked 18th in total defense, 27th in passing defense and tied for 24th on third downs as the team dealt with various injuries.The 64-year-old Fangio, a respected defensive mind, figures to mesh well with Dolphins coach Mike McDaniel and the talent Miami has on defense.Defensive tackle Christian Wilkins had a career year, totaling 98 tackles. Linebacker Jaelan Phillips and rookie cornerback Kader Kohou both had standout seasons.By ALANIS THAMES AP Sports Writer
DENVER, CO・2 DAYS AGO
CBS Denver

Former All-Star center fielder Dexter Fowler is calling it a career after 14 years in the big leagues. Fowler made the announcement on Tuesday via social media.The Colorado Rockies drafted Fowler in the 14th round in 2004 out of Milton High School in Georgia. Four years later, he became a mainstay in the Majors, finishing 8th in Rookie of the Year voting in 2008. Fowler spent the first six years of his career in Colorado. He went on to play one year in Houston, two with the Chicago Cubs, four in St. Louis, and one with the Angels.Fowler will be...
DENVER, CO・17 HOURS AGO