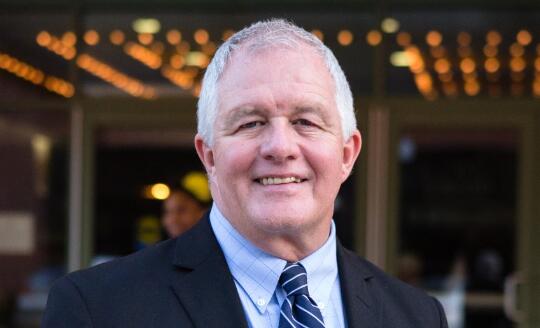 DeLuce started the parade in 2001 and has served Champaign communities through the park district for over 25 years. Xander Hazel, Executive Director of the Champaign Center Partnership, believes DeLuce was “an ideal pick for the grand marshal this year.”

The idea of the Parade of Lights emerged when DeLuce lived in Fort Lauderdale, Fla. He recalled that he and his wife loved seeing all the boats lit up at the holiday parade every year.

“We thought it would be great to do that here in Champaign and make it a festive holiday event at night,” DeLuce said.

Chelsea Norton, Marketing Director at the Champaign Park District, nominated DeLuce as the grand marshal and spoke highly of his work.

“More than anything, Joe’s contribution to the Champaign Park District and its community, is his passion and unwavering commitment to his staff and the field of parks and recreation,” Norton stated in her nomination.

DeLuce is currently on the Illinois Association of Park District’s Joint Legislative Committee and recently received the Joe Bannon Practitioner Award from the University of Illinois. He is married to Jayne Turpin DeLuce and has two children. DeLuce plans to retire from the park district at the end of this year and embark on trips with his wife.

With the theme of “Island of Misfit Toys,” the 2022 Champaign Center Parade of Lights will take place in downtown Champaign on Saturday, Nov. 26. The parade kicks off at 6 p.m., while there will be programming beginning at 3:00 p.m. with Visits with Santa at Big Grove Tavern, horse and carriage rides and entertainment.

Participants can expect to make a day of it by enjoying holiday festivities and shopping for local gifts on Small Business Saturday.

CHAMPAIGN, Ill. (WCIA) – The spot where a bar once stood could be named historical by the city of Champaign. But, they’ll have to write a new process to do it. The Chester Street Bar collapsed several years ago. It was considered a safe space for the LGBTQ community. People like former employee Leslie Krause […]
CHAMPAIGN, IL・1 DAY AGO
WCIA

‘An option for everyone’: Champaign Co. Restaurant Week returns

DECATUR, Ill. (WCIA) — The Decatur Salvation Army is moving forward in 2023 with new hours of operation at their W. Main St. location. The new hours are now Tuesday and Wednesday evenings at 5-7 p.m. and Saturdays at 8-10 a.m. “With consultation from University Extension SNAP-Ed and upon looking at access to food in […]
DECATUR, IL・1 DAY AGO
WCIA

CHAMPAIGN, Ill. (WCIA) – “We’re a product of environment. If nobody else is going to do it, somebody will have to do it,” Riynard Wilson said. Wilson wants to create a positive environment for kids who may not have one of their own. He and fellow youth mentor Tony Odom are opening a “safe space […]
CHAMPAIGN, IL・2 DAYS AGO
WCIA

DECATUR, Ill. (WCIA) — The Salvation Army of Decatur is helping more families get food. They partnered with the University Extension Snap-Ed Program to widen access for working families. The food pantry used to open a couple of days out of the week from 9 AM to 11 AM, but now they’ve changed the days and moved those hours into the evening and during weekends.
DECATUR, IL・1 DAY AGO
WCIA

Red Mask Players has brought live theater to the Danville and surrounding communities for 86 years. We will be discussing our upcoming production of Humble boy written by Charlotte Jones. This show was inspired by Hamlet (without the tragic ending), and modernized into a comedy. Director Amanda France will be in attendance and has vast knowledge of the theater, and is currently sits as 1st Vice president for the Red Mask board of directors. Lisa Strain has been performing with Red mask since her early teens and for over 20 years or more.
DANVILLE, IL・1 DAY AGO
WCIA

CHAMPAIGN, Ill., (WCIA) — Homeless shelter leaders said they need additional state and federal funding to support their operations, and Thursday night, volunteers are taking steps to get there. It’s part of the Point-in-Time count, a survey to see the number of people who are homeless in Champaign County. Organizers said it lets them help […]
CHAMPAIGN, IL・1 DAY AGO
WCIA

CHAMPAIGN, Ill. (WCIA) — “I walked out of my place on Sunday with just the clothes I’m wearing and an empty backpack to experience sleeping outside and living on the street for 14 days,” Warren Charter said. Warren Charter started at Kaufman Lake in Champaign and has made his way into downtown Champaign so far. […]
CHAMPAIGN, IL・2 DAYS AGO
WCIA

CENTRAL ILLINOIS (WCIA) — Below are some of the early closures and cancelations already being reported, for a complete list of business and school closings, check our Snow Bear Closings and Delays page. Charleston Superintendent Todd J. Vilardo said all schools in the district will have an e-learning day on Wednesday due to the incoming winter […]
CHARLESTON, IL・3 DAYS AGO
WCIA

Founded in the year 2017, Salon 105 is an upscale salon started by Mahomet native Kelsie Briggs. With a team of the most sought-after stylists and colorists in the area, the salon is known for its exceptional quality services, kindness, and friendly team-based atmosphere. Our mission at Salon 105 is...
MAHOMET, IL・1 DAY AGO
WCIA

CHAMPAIGN, Ill. (WCIA) — The City of Champaign announced that a portion of the southbound lane of Melinda Avenue will be closed on Wednesday due to a tree removal. The closure, between Bloomington Road and Honeysuckle Lane, begins at 7 a.m. The city said traffic on Bloomington will not be allowed to turn south onto […]
CHAMPAIGN, IL・3 DAYS AGO
WCIA

CHAMPAIGN, Ill. (WCIA) — The Strides Shelter in Champaign said many items are in high demand. They said: “If you are looking for a way to help us push our mission forward, please consider donating:” The shelter also has other ways to give.
CHAMPAIGN, IL・2 DAYS AGO
WCIA

DECATUR, Ill. (WCIA) –Decatur is taking another step toward revitalizing the city. The Economic and Development team is using one million dollars worth of ARPA money to cover the cost of the improvements. More than 500 people applied, but not everyone will get the upgrades. The rehab program requires homeowners to live in the house […]
DECATUR, IL・1 DAY AGO
WCIA

DECATUR, Ill. (WCIA) — The Decatur Fire Department and Illinois State Fire Marshal are jointly investigating a house fire that was deemed suspicious. The fire happened at 229 East Stuart Avenue just before 2 p.m. on Friday. Firefighters responded to that address and found a large fire inside the attached garage, with the flames extending […]
DECATUR, IL・16 HOURS AGO
WCIA

CHARLESTON, Ill. (WCIA) — People parking their cars on Charleston streets will need to be mindful of where they park over the next few days as the city activates its snow routes ahead of Wednesday’s winter storm. Snow routes will be enacted on the following streets and blocks: It will be illegal to park on […]
CHARLESTON, IL・3 DAYS AGO
WCIA

CHAMPAIGN, Ill. (WCIA) — The Champaign Urbana Public Health District is reminding people of its Breast Milk Dispensary and Depot. The health department works with Mothers Milk Bank of the Western Great Lakes to provide a space for mothers to donate their extra milk for premature and critically ill infants. Officials also said the service […]
URBANA, IL・1 DAY AGO
WCIA

CHAMPAIGN, Ill. (WCIA) — The City of Champaign announced Garwood St. will be closed beginning Tuesday. The closure, between Walnut St. and Champaign St., is so sanitary sewer services can be repaired on the 1200 block of Walnut St. The closure will happen all week weather permitting, and is scheduled to reopen on Friday. Traffic […]
CHAMPAIGN, IL・4 DAYS AGO
WCIA