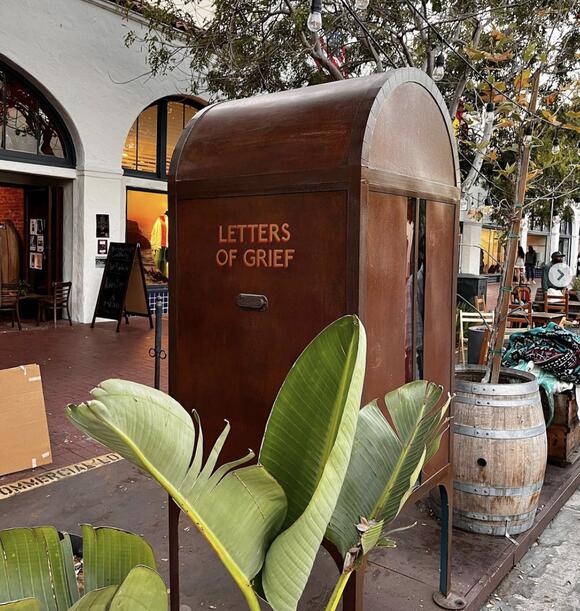 SANTA BARBARA, Calif. – It stands 7.5-feet tall and the goal is to fill it with letters of expression, either praise or grief.

The Story Catcher Mailbox Project began after the Thomas Fire and Montecito mudflow five years ago.

It was an art project, installed on State St. and eventually it went to different areas including Ventura County and the Carpinteria Arts Center.

It was designed to be similar to a regular mailbox, but its twice the size, its a bronze color (not blue) and has openings on either side with vintage slots marked "letters."

The public is asked to write letters of grief or praise, and puts them inside. They are opened and read out loud at different times as part of the projects mission. Selected letters are published in a monthly publication.

One of the Story Catcher designers Danielle Siano said, the box is back in front of Wylde Works in the 600 block of State St. near Cota and is taking in letters, notes, cards, and even drawings with messages.

The timing after the hardest months of COVID and the current inflationary challenges, is right.

Siano said, "we have just been through the pandemic and that entire time, I think people were really wanting to. find a way to express themselves. A lot of people had gone through  traumatic times and I knew it would be of service to some people."

Story Catcher had a team of about five designers, including Mike Kent. "I think it is a fantastic way  for the people who see it and understand it to express themselves and let those motions in and motions out and I am really excited to see it come back. "

What was once an art piece,  now connects on four levels..

People connect with themselves when they write down their stories in a letter, then they drop it in the mailbox, a few days later comes to a reading where they can hear their letter and, in that space they hear other people's stories as well.

It's a method of communicating that can be so different than most messages these days.
"There's nothing like it. If you sit on your computer or you write text messages to somebody, I don't believe that you have the same access to what's most important to your healing," said Siano.

The mailbox is open around the clock.

"Some of the letters as you can see are really thought out and some put their names and some are anonymous," said Siano who opened the box to check what was coming in.

Kent said, "it's a long standing piece. Really proud of it,  really excited that the community gets to experience it again."

Praise can also be gratitude, congratulations, relief, joy, cheers, admiration, a compliment or to rave about.

The box had been in storage and it was moved to the new location with the help of Giffin equipment, and Dylan Wylde of Wylde Works.

The next reading is expected to be Tuesday evening at Wylde Works as part of the "open mic" night.

For more information go to: www.storycatchermailbox.com

Mountain landslides were slowed by some chain nets, but some were overwhelmed. Repairs are underway in the Santa Barbara front country foothills. The post Metal nets hold back crumbling hills in most cases but some will need a repair soon appeared first on News Channel 3-12.
MONTECITO, CA・1 DAY AGO
News Channel 3-12

The Lompoc Aquatic Center staff says they are looking to hire anyone that meets the requirements to become a lifeguard. The post City of Lompoc hiring lifeguards at Aquatic Center appeared first on News Channel 3-12.
LOMPOC, CA・2 DAYS AGO