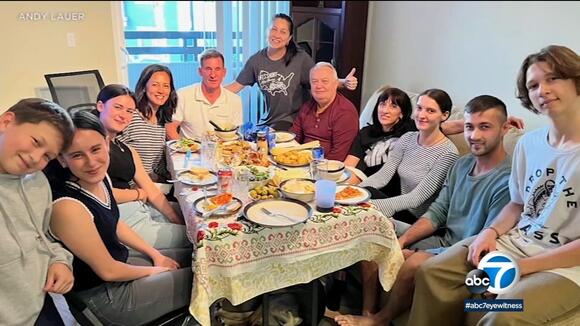 In April, a Santa Monica family opened their home to a family of Ukrainian refugees amid turmoil in their country. Now, after months of learning from one another, Thanksgiving Day brought them even closer. "I am so happy that I am here with these people and be grateful that they exist and that they were born on this Earth," said 16-year-old Mark Molot of Ukraine, who has been adapting well to life in the U.S. Molot, his mother, brother, uncle and his uncle's girlfriend reunited Thursday with the family of Andy Lauer. Nearly a year ago, the family fled their war-torn country, finding peace and safety in Los Angeles thanks to the Lauers and the community's support. "Just seeing the looks on their faces ... lost, unsure of what was happening next," said Lauer. "Now, when I see them back at our table, it's just ... it's such a cool feeling knowing that I see peace in their eyes and in their smile." READ MORE | Ukrainian refugee family finds shelter and safety in home of Santa Monica family

Forced to flee their homeland as Russian soldiers invaded, a Ukrainian family who crossed border after border has finally found shelter and safety in the home of a local family in Santa Monica.

Each family learned a lesson about the human spirit and Molot said through difficult times, he never gave up hope. The L.A.-area community also pitched in to help the family with food, resources and financial assistance. "I have Ukrainian heritage. Many of us were looking for what to do," said a neighbor. The Ukrainian family now lives in an apartment in Canoga Park. Lauer said it was made possible with the help of a $20,000 donation from a well-known actor and comedian. "I know I might get trouble, and they might be mad at me, but it was from the Will Ferrell family," he said. The war between Russia and Ukraine has taken another dark turn recently, with parts of Ukraine and its capital without power and water following deadly missile attacks. As the battle rages on, Molot's family is striving to carve out a life in Southern California, in hopes one day they will be able to reunite with his father, grandfather, sisters and brothers in central Ukraine. "I want to speak with them, like, 'How is it going in Ukraine?'" said the teen. Until then, both families will keep each other at peace, for Thanksgiving and beyond.

Those killed by a gunman who opened fire at a Monterey Park dance hall are being remembered by friends and family for the zest for life that brought them out that night to celebrate the Lunar New Year.
MONTEREY PARK, CA・21 HOURS AGO
ABC7

Family and friends honored Elliot Blair, an Orange County lawyer who died on vacation in Mexico, during a vigil Thursday night, as questions remain about the circumstances of his death.
ORANGE COUNTY, CA・20 HOURS AGO
ABC7

Bravo Toast, which sits at the crossroads of West Hollywood and Beverly Hills, is a self-proclaimed elevated fast-casual breakfast and lunch spot - and it's serving up an avocado toast that makes the most carb-conscious Californians fall in love.
WEST HOLLYWOOD, CA・14 HOURS AGO
ABC7

The nonprofit Hollywood Partnership opened it's new community dispatch center, part of an experiment that could have implications for the entire city of Los Angeles
LOS ANGELES, CA・1 DAY AGO
ABC7

Watch as over 100,000 spectators in Los Angeles' Chinatown celebrate the Year of the Rabbit.
LOS ANGELES, CA・22 HOURS AGO
ABC7

The cast and crew of the Oscar-nominated film "Everything Everywhere All at Once" honored the victims of the Monterey Park massacre with a touching Lunar New Year celebration at one of the city's popular restaurants.
MONTEREY PARK, CA・2 DAYS AGO
ABC7

A radio-collared mountain lion known as P-81 was found dead on Pacific Coast Highway in the western Santa Monica Mountains after likely being struck by a vehicle.
SANTA MONICA, CA・17 HOURS AGO
ABC7

The Monterey Park mass shooting has only sharpened residents' feelings about what makes the tight-knit community so special, and worth protecting.
MONTEREY PARK, CA・1 DAY AGO
ABC7

The man who disarmed the Monterey Park mass shooter less than half an hour after the massacre is set to receive a special honor for his actions.
ALHAMBRA, CA・1 DAY AGO
ABC7

Amber Miller is opening the doors of her spa to Long beach teenagers so they can learn business and life skills.
LONG BEACH, CA・14 HOURS AGO
ABC7

Monterey Park, a diverse community filled with culture and sense of belonging, now healing together

The community is more than 60,000 people and about 65% are Asian. More than 28,000 people are Chinese residents, according to the Census data.
MONTEREY PARK, CA・4 DAYS AGO
ABC7

After 11 innocent people died in the Monterey Park shooting, community members are urging seniors in the Asian community to seek help to heal.
MONTEREY PARK, CA・1 DAY AGO
ABC7

A couple in Arcadia is selling doughnuts to raise money for the victims of the Monterey Park mass shooting. It's an effort to honor the victims, including one who was very close to the couple.
MONTEREY PARK, CA・1 DAY AGO
ABC7

Video of a driver defending his rights as he denied a Costa Mesa police officer access to a vehicle for a search has gone viral on social media.
COSTA MESA, CA・12 HOURS AGO