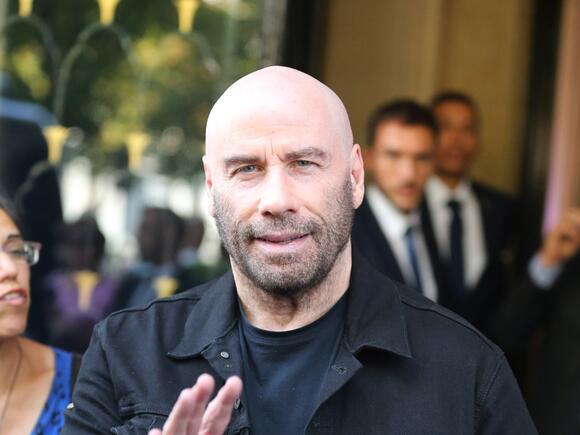 John Travolta didn’t let Thanksgiving prep get in the way of publicly wishing his youngest child, Benjamin, a very happy twelfth birthday! The actor took to Instagram Wednesday to share a picture of his son, with their adorable rescue dog, Peanut, to wish Ben a very special day.

“Happy birthday my Ben! From your Dad, Ella and Peanut!! We love you so much!!” the actor posted on Instagram.

Ben’s big sister, twenty-two-year-old Ella, put together a tribute of her own. Posting a similar image of Ben cuddling the little pup, Ella wrote, “Happy Birthday to the sweetest boy I know❤️🎉🐶 I love you!!!”

Being that the day after Ben’s special day was a national holiday, John also later took to social media to share what he’s thankful for. “Okay, so I am thankful today for my children and for you and for our new dog Peanut,” he said in a video, with a cameo from (a very boisterous!) Peanut. “Thank you. Happy Thanksgiving.”

Ben, John, and Ella are all clearly devoted to the pup, who joined the Travolta clan earlier this year. John adopted Peanut after first crossing paths with the dog at the Academy Awards, of all places!

John’s friend Jamie Lee Curtis featured Peanut — then known as ‘Mac ‘n Cheese’ — in an Oscars segment memorializing Betty White, who was an advocate for animal adoption. The move was designed to bring attention to the plight of animals in need of loving homes. Jamie’s plan may have worked out better than she intended — at least for Peanut! John fell in love on the spot, and arranged to bring Peanut home to his two children.

Peanut is, according to John, officially Ben’s dog. Earlier this year, John posted a video of Peanut waking him up with a few facial licks. In that post, John revealed that the pup really belongs to the 12-year-old.

In addition to playing with his dog, Ben is developing a big hobby of his own. On his own Instagram page, Ben shares photos and videos of himself doing impressive feats of flying, jumping, and more.

Before you go, check out these celebrities kids who have a close bond with their siblings.

Yet again, Andie MacDowell’s daughter Rainey Qualley is turning heads by taking part in another magnificent photoshoot that shows off her modeling prowess. On Jan 27, Qualley shared a series of photos of her rocking a sheer YSL dress to her Instagram with the caption, “xoxo @ysl.” You can see the photos HERE! In the pictures, we see Qualley looking enchanting in a dress that perfectly accentuated her natural curves (and sent fans’ hearts racing with the chic, daring angles from the shoot!) Styled by Marc Eram (the same one who styled Qualley in that gorgeous pirate-esque lingerie set), Qualley was photographed in an...
2 DAYS AGO
SheKnows

Patrick Mahomes and Brittany Mahomes have a knack for fashion, something both of their kids already seem to have! On Jan 28, Brittany shared an adorable snapshot of Bronze’s look for the day with the caption, “Sterling wants him to wear these shoes every day 😂😂.” See the photo from her Instagram story below: In the new photo of Baby Bronze, we see him in his adorable brown and white look, including rocking the little accessory his big sissy wants him to wear: small brown loafers! He has a monogrammed brown bodysuit with his name sewn on the front, along with...
HAWAII STATE・3 DAYS AGO
SheKnows

Ashlee Simpson just uploaded one of the sweetest family photos yet, and this super-rare snapshot features all three of her super-cool kiddos!. On Jan 27, the Autobiography singer shared a super-touching snapshot of the whole family with the caption, “Aspen snow bunnies @realevanross.”. In the photo, we see the...
4 DAYS AGO
SheKnows

On January 29, 2022, the daytime stars welcomed a second daughter into their family. Today we’re sending a big happy belated birthday to the second daughter of The Bold and the Beautiful’s Darin Brooks (Wyatt) and his wife Kelly Kruger (ex-Eva). To celebrate little Gemma Wynter’s first birthday, her proud parents posted a video filled with memorable moments and Kruger shared, “I can’t tell you how many times I cried… going through the past year in photos. I only added a handful here but wow did that year fly by.”
5 HOURS AGO
SheKnows

Happy birthday, Stormi! Kylie Jenner and Travis Scott’s daughter turned 5 today, and the Kylie Cosmetics founder is celebrating with the cutest new pictures of the little girl — and, of course, a huge birthday party. “I gave you the gift of life and life gave me the gift of you. the most special girl,” The Kardashians star wrote on Instagram today, along with several photos of her daughter. (See the pictures HERE.) “This little face. i will miss it as it keeps changing,” she added, and we are definitely feeling a little emotional. In the first photo, Stormi is dressed in...
5 HOURS AGO
Distractify

“King of Pop” Michael Jackson’s family has been all over the news lately. The late pop star’s ex-wife Lisa Marie Presley passed away on Jan. 12. His daughter, Paris Jackson, attended the Los Angeles premiere of the documentary Pamela, a love story on Monday, Jan. 30. And that same day, Michael’s son Prince Jackson congratulated cousin Jaafar Jackson on his role as the “Thriller” singer in the upcoming biopic Michael. But what about Michael’s other son? Where is Blanket Jackson now?
LOS ANGELES, CA・1 DAY AGO
SheKnows

Lisa Marie Presley passed away just over two weeks ago, and it looks like her family is gearing up for a fight over her estate. The legal battle that seems to be forming is going to pit grandmother Priscilla Presley against granddaughter Riley Keough, Lisa Marie’s oldest child. According to TMZ, Priscilla has already filed legal documents contesting that she and Lisa Marie’s former business manager, Barry Siegel, are no longer trustees to her daughter’s estate. Apparently, there was an amendment made to the trust, and Riley and her late brother, Benjamin Keough, are the trustees now. Priscilla believes that Lisa...
5 DAYS AGO
SheKnows

“What a beautiful, bright light we lost today.”. Multiple fandoms are mourning the passing of much-loved actress Annie Wersching. To General Hospital fans, she was Amelia Joffe. Viewers of Star Trek: Picard knew her as the Borg Queen. And Vampire Diary lovers know her Lily was the mother of the Salvatore brothers.
2 DAYS AGO
SheKnows

But that doesn’t mean Michael should look for a new love!. When it comes to General Hospital, we’ve learned that you should never say never. As in “Oh, they’d never kill Brando and Sasha’s baby.” Or “Oh, they killed Sasha’s baby… surely they wouldn’t kill her husband, too!”
22 HOURS AGO
SheKnows

The only way to protect the Abbotts may alienate her from them for good. Young & Restless’s Diane just made perhaps the most important promise of her life when she told Kyle that no matter what happens she would never abandon him again. Unfortunately for her, that vow may be put to the test almost immediately…
3 HOURS AGO
SheKnows

We’ve written before about how The Young and the Restless desperately needs some have-nots on the canvas. (Missed it? Here’s the story.) When everybody in Genoa City is filthy rich, to what is any character aspiring? Spoiler alert: nothing. We just get nonstop job swaps and mergers and takeovers, none of which ever feel like they are impactful. “Wealthy guy fired at company No. 1 goes to work at company No. 2. Still wealthy. Big whoop.”
7 HOURS AGO
SheKnows

Sheila’s presence in Bill’s life is pushing one of his nearest and dearest to the brink. One way to fight fire, they say, is with fire. So perhaps it stands to reason that a reasonable means of fighting madness… is with more madness? That may be what The Bold and the Beautiful has Katie thinking these days.
2 DAYS AGO
SheKnows

When it comes to grades, Gabrielle Union’s daughter Kaavia James has some very strong opinions. The 4-year-old isn’t called Shady Baby for nothing! In the most adorable new Instagram video, Kaavia calmly discusses her report card with her mama, and it’s the Monday morning pick-me-up you need! “My report card got ‘yes!’” Kaavia tells the Truth Be Told actress in a new Instagram video. The preschooler is wearing a red polo-shirt with her curly hair in two ponytails on top of her head. She’s drinking a glass with ice and what looks like sweet tea on this Sunday catch-up with her...
2 DAYS AGO
SheKnows

If you purchase an independently reviewed product or service through a link on our website, SheKnows may receive an affiliate commission. There’s a unique sense of excitement we feel when one of our favorite novels gets the big screen treatment — and it’s happening yet again. Blake Lively is set to star in the film adaptation of Colleen Hoover’s bestselling novel It Ends with Us, and we couldn’t be more thrilled. This page-turner is climbing the Amazon charts as we speak, and you can buy your own copy for just $10 right now. Now, if you’re new to the Colleen Hoover craze...
4 DAYS AGO
SheKnows

Reflecting On His Run as Bold & Beautiful’s Carter, Lawrence Saint-Victor Marvels, ‘It’s Been an Amazing Ride’

January 31 was a momentous one for the actor. It seems like only yesterday, doesn’t it, that The Bold and the Beautiful was introducing Lawrence Saint-Victor as Marcus’ brother, Carter Walton. But as of January 31, it had been 10 — count ’em, 10 — years. “I can’t tell you how loved and grateful I feel right now,” the actor Instagrammed. “I literally don’t have the words.”
1 DAY AGO
SheKnows

If you purchase an independently reviewed product or service through a link on our website, SheKnows may receive an affiliate commission. Jeannie Mai-Jenkins just showed how happy, and content, her emotive daughter Monaco looked ahead of her adorable daddy-daughter day. Get ready: because your heart is about to melt! On Jan 25, the Real alum shared an adorable snapshot of Monaco in her playpen surrounded by her plushes, laying on a very comfortable-looking sloth stuffed animal with the caption, “Hanging with Daddy today @monacomaijenkins.” In the photo, we see Monaco looking so content and cute as she lies, drinking from her bottle. Her...
4 DAYS AGO
SheKnows

Young & Restless Blackmail Bombshell: Jack’s Jewel Heist Comes Back to Bite Him — and He’s Not the Only One!

Someone knows what Jack did… and he’ll use the information to achieve his own ends. There were some very puzzling scenes involving Nikki and Victor earlier this week on Young & Restless. Scenes that left us wondering, “So, that’s it?!?” You may even be able to guess which ones we’re referring to… but what do they have to do with Jack? Well, we’ll tell you…
1 DAY AGO
SheKnows

In case you didn’t know, nobody goes to kids’ birthday parties for the food. Or the entertainment. Or even for a few minutes alone with the birthday kid. You go to a wild, sugar-infused party with tons of little kids for two reasons: because A) you love the child or B) you want your own kid to have fun (and burn off some energy on the weekend). That’s it. Most parents know this, which is why it was a little surprising that one mother-in-law on Reddit expected something totally different when she showed up to her grandkids’ birthday party. This mom...
2 HOURS AGO