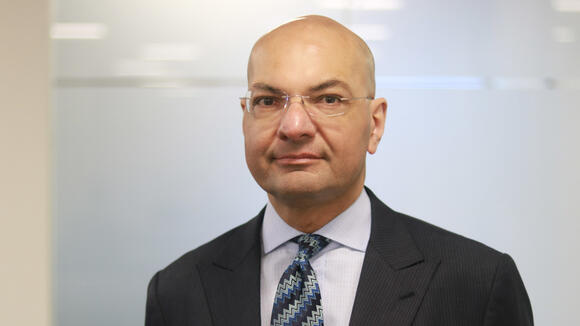 It’s all about the Fed, says Karim Ahamed, a partner at wealth management firm Cerity Partners. The Federal Reserve’s December meeting will probably determine the direction of financial markets, he said in a conversation with TheStreet.

If the Fed indicates its interest rate increases are nearing their end, markets will likely respond positively, Ahamed said. But if the central bank voices the need for higher rates than the markets expect, they’re likely to respond negatively, he said.

Ahamed also provided commentary about a growth-stock, exchange-traded fund (ETF) and an energy-stock ETF that he likes

TheStreet: What do you expect to be the major issues in financial markets over the next year?

Ahamed: The No. 1 issue is where does the Fed go. How far will it raise interest rates in December? The outcome and tenor of the Fed’s communique will be a major driver for markets.

TheStreet: The consensus view is that the Fed will raise rates 50 basis points in December and indicate a terminal federal funds rate of 5%. How would that affect markets?

Ahamed: Based on recent market behavior, if there is any signal the Fed is close to an end in raising rates, it will have a salutary impact on U.S. markets. If the Fed says the U.S. economy is too strong and it needs to lift rates [a lot], that could hurt U.S stocks.

TheStreet: What’s a major issue you see facing financial markets beyond next year?

Ahamed: There’s a movement toward de-globalization. The free trade campaign that began after World War II has been rolled back. This will play out in a reduction of U.S. reliance on China’s supply chain.

That could benefit the U.S., including stocks, because we have relied so heavily on China’s supply chain. Covid was a wakeup call [because it shut that supply chain down].

If the conflict between the U.S. and China continues, there will be impetus for U.S. companies to re-shore production in the U.S., and go to other countries that are more hospitable.

But other elements of de-globalization could hurt U.S. stocks. The U.S. has been a big beneficiary of free trade. So maybe a move away from that will make it difficult for U.S. companies to sell their products in some countries.

TheStreet: Do you think the stock market has bottomed?

But it all depends on the outcome of the Fed meeting in December. We aren’t out of the woods, but the last few weeks have been encouraging.

TheStreet: What are a couple stocks or stock funds that you like?

Ahamed: We prefer funds, [because they’re diversified and less risky]. Here are a couple that we’ve bought tactically—for the next 12 to 24 months.

The first is Vanguard Growth ETF (VUG) - Get Free Report. We bought it as a recovery play. Growth stocks have gotten pummeled this year, but the economy is relatively healthy.

Big technology names are down so much that investors might see that as a reason to go back. Tech companies continue to be profitable.

Ahamed: The Energy Select Sector SPDR ETF (XLE) - Get Free Report. This is a good play on the energy rebound. The global energy supply disruption will likely persist at least two years.

Exports from Russia, Iran, and Venezuela will continue to be sidelined. OPEC+ has resolved to maintain high prices. U.S. shale producers haven’t jumped in to boost supply. All that is likely to keep energy prices higher in the next 18 to 24 months.

Ahamed: After a decade of abnormally low rates, they are starting to look attractive. We like municipal bonds, partly for their tax advantage, and also because of the improved state of state and municipal finances.

What Apple, Amazon and Google Earnings Mean for the Market

The January jobs report shocked Wall Street, so what does it mean for the Federal Reserve? TheStreet Today breaks it down.
3 DAYS AGO
TheStreet

Cathie Wood Believes One Major Market Problem May Be Over

After a tumultuous 2022, Ark Investment Management is off to a strong start in 2023.
2 DAYS AGO
coinchapter.com

The US Government ordered the Pentagon to destroy the alleged Chinese spy balloon. The US Air Force shot down the balloon with a single missile as it drifted over the Atlantic Ocean. China hit back at the decision, threatening a strong retaliation. YEREVAN (CoinChapter.com) — Over the last few days,...
MONTANA STATE・1 DAY AGO
TheStreet

The outspoken CNBC host and contributor makes his case when asked which automaker stock he'd rather own.
8 HOURS AGO
TheStreet

Billionaire investor Ryan Cohen, who has scored big on activist stakes in GameStop and Bed Bath & Beyond, now has his sights set on struggling retailer Nordstrom.
3 DAYS AGO
Deseret News

Nonfarm payrolls soared 517,000 in January, while the unemployment rate dropped to a 53-year low of 3.4%.
7 HOURS AGO
TheStreet

Is Alphabet Stock a Buy Despite Earnings Miss? Chart Holds a Clue

Alphabet stock fell almost 5% after missing on earnings and revenue estimates, but quickly erased its losses. Here's the trade.
3 DAYS AGO
TheStreet

The billionaire was asked to provide Starlink to Turkey, which was struck by an earthquake that has killed more than 2,300 people.
6 HOURS AGO
TheStreet

Buy Dell Stock and Its 3.25% Dividend Yield? Check the Chart.

Dell stock has rebounded off the fourth-quarter lows, but the shares remain below resistance. Here's how to trade it from here.
9 HOURS AGO
TheStreet

The Richest Man in the World Takes on Elon Musk

Bernard Arnault, the CEO of luxury giant LVMH, has just invested in the luxury car manufacturer Lotus, which is betting on EVs.
3 DAYS AGO
TheStreet

The rebound in Meta's stock boosted the fortune of Meta Platforms CEO Mark Zuckerberg to $69.8 billion.
3 DAYS AGO
TheStreet

The two major U.S. institutional investors have exposure to the Adani Group conglomerate.
1 DAY AGO
TheStreet

What's next for the Federal Reserve's rate hikes? That's a question investors are wondering about as Friday's jobs report came in hot.
WASHINGTON STATE・13 HOURS AGO