The Daily Montanan is a nonprofit, nonpartisan source for trusted news, commentary and insight into statewide policy and politics beneath the Big Sky. We seek to cover state government and issues, including public lands, politics, healthcare and education by not only reporting what is happening, but why and how the news affects the lives of Treasure State residents. We are an independent news outlet dedicated to the belief that truth, transparency and trust are essential to a free republic. We are a proud affiliate of States Newsroom, a national 501(c)(3) nonprofit supported by grants and a coalition of donors and readers, which has editors and reporters throughout the country dedicated to relentless coverage of state government, policies and statewide issues. 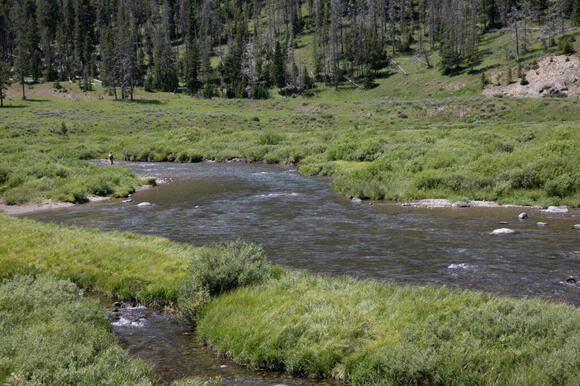 The Gallatin River (Photo by Diane Renkin of the National Park Service, public domain via Flickr).

A Gallatin County judge has ordered the Montana Department of Environmental Quality to go back and review a wastewater permit in one of the toniest areas of the state, which environmental advocates say could potentially pollute one of the state’s most famous – and imperiled – rivers.

Gallatin County District Court Judge Peter Ohman determined that a wastewater permit issued to the Lazy J South subdivision in Big Sky was incorrectly issued by the DEQ because it failed to take into consider the cumulative impact more homes and businesses in the subdivision would have on the nearby Gallatin River.

The Gallatin River is one of Montana’s most prized waterways, noted for its fishing, but dramatically increased development in and around Bozeman has recently made it one of the most imperiled rivers with annual algae blooms threatening aquatic life and the clean water in it.

Lazy J South is a residential and commercial development located less than a half a mile from the mainstream portion of the Gallatin River in Big Sky Canyon. Ohman ruled in favor of the Upper Missouri Waterkeeper and the Montana Environmental Information Center, which brought the suit, and ordered the department, which is responsible for clean water and enforcing wastewater standards, to perform a new assessment that examines the cumulative impacts of the wastewater discharge.

Ohman pointed out that even though construction continues in the subdivision, the original permit for wastewater has not changed since the permit was issued in 2006.

During this summer, the Montana DEQ issued a preliminary determination that the mainstream of the Gallatin River was “impaired” for algal blooms.

“We are encouraged by the court’s ruling today, which vindicates the public’s right to a thorough assessment of pollution impacts to our local waterways before decision-making,” said Guy Alsentzer, executive director of the Upper Missouri Waterkeeper. “The Lazy J South pollution permit is just a single case representative of a larger issue in Montana, where agencies continue to rubber stamp new development approvals without looking at the combined impacts on our finite and valuable water resources.”

stop contaminating our precious water. the world itself is loosing fresh water not gaining it. most western lakes are nearly dried or dried up. no building anything alongside and River, for the sake of us humans

Voters should have a say in this decision and not just one judge. These out of state developers with deep pockets are wreaking havoc and encroaching on our waterways.

Heart Butte School District Superintendent Mike Tatsey acknowledged he allowed staff in the district to remain employed despite positive drug tests. However, in a November interview, Tatsey said those who tested positive went to treatment and came back “completely fine.” “We want to help people like that,” Tatsey said. “We want them to go get […] The post Heart Butte Superintendent permitted teachers with positive drug tests to continue employment appeared first on Daily Montanan.
HEART BUTTE, MT・14 DAYS AGO
Daily Montanan

If your spouse cheats on you and you get a divorce, your pocketbook will suffer. With House Bill 204, Rep. Bob Phalen, R-Lindsay, wants you to be able to recover financially. “This bill does one thing,” Phalen said. “It gives adulterated victims of divorce a means of recouping losses caused by the adultery.” Phalen, who […] The post Opponent: Bill would revive law established when women were ‘husband’s property’ appeared first on Daily Montanan.
MONTANA STATE・13 DAYS AGO
Daily Montanan

The American Civil Liberties Union has filed a motion in Yellowstone County District Court to hold the Montana Department of Public Health and Human Services and Gov. Greg Gianforte in contempt for refusing to follow what it says are two court orders to change its policy for amending gender designations on birth certificates. It has […] The post ACLU asks Yellowstone County judge to hold state in contempt for failing to comply with court order appeared first on Daily Montanan.
YELLOWSTONE COUNTY, MT・4 DAYS AGO
Daily Montanan

We would like to publicly call out the action in the House Judiciary Committee during the Jan. 13 hearing of Representative Ed Stafman’s House Bill 202. This bill advocated for the establishment of Extreme Risk Protection Orders that would provide procedures for family members and law enforcement to temporarily remove firearms from the possession of […] The post Anti-democratic behavior on full display in House Judiciary appeared first on Daily Montanan.
MONTANA STATE・8 DAYS AGO
Daily Montanan

Something doesn’t seem right with the Holland Lake Lodge transfer

Thank goodness the public has been digging deep and exposing the shadiness that is happening in regards to Holland Lake Lodge, which operates on public National Forest Land via a special-use permit.  The proponents of this project have already lied about: The presence of wildlife in the Holland Lake area; the actual acreage of the […] The post Something doesn’t seem right with the Holland Lake Lodge transfer appeared first on Daily Montanan.
MONTANA STATE・13 DAYS AGO
Daily Montanan

Chief Earl Old Person deserves consideration for a Memorial Highway in Montana. Sen. Theresa Manzella states that the rodeo grounds in Browning are already named after the Chief–honoring his tribal name. The typical tourist travelling through Montana is not experiencing the rodeo grounds in Browning–but would become acquainted with Chief Old Person if his namesake […] The post Old Person deserves recognition, memorial highway appeared first on Daily Montanan.
MONTANA STATE・9 DAYS AGO
Daily Montanan

Save Holland Lake: ‘We are requesting transparency’ from Flathead National Forest

A group that formed to fight a proposed expansion at Holland Lake Lodge is requesting the U.S. Forest Service make public the revised development proposal as soon as the agency receives the application. In a Jan. 13 letter, Save Holland Lake, the group that is contesting the expansion, said since the Flathead National Forest announced […] The post Save Holland Lake: ‘We are requesting transparency’ from Flathead National Forest appeared first on Daily Montanan.
UTAH STATE・12 DAYS AGO
Daily Montanan

Bill to repeal Montana’s energy policy up for third reading in House, other updates

The governor’s policy director and the bill sponsor said Thursday they would be open to including a phase-out at a slightly higher income level in their measure that would provide a $1,200 tax credit for each Montana child ages 5 and under. The child tax credit is one of the major proposals from Republican Gov. […] The post Governor’s office, bill sponsor say they’re open to phase-out for proposed Montana child tax credit appeared first on Daily Montanan.
MONTANA STATE・3 DAYS AGO
Daily Montanan

Just weeks after a Cascade County judge agreed with a jury that the insurance company that represented a Libby asbestos mine should pay a former miner there $36.5 million, attorneys for that miner filed a complaint in federal court, claiming that Zurich American Insurance Company systematically stalled and dragged out court proceedings in an attempt […] The post Federal lawsuit claims insurance company deliberately stalling in Libby asbestos cases appeared first on Daily Montanan.
LIBBY, MT・8 DAYS AGO
Daily Montanan

Rick Santorum, the former U.S. Republican senator from Pennsylvania and once-presidential candidate, led testimony Wednesday in favor of a joint resolution seeking to add Montana to a coalition of states that wants to make amendments to the U.S. Constitution. Another 26 proponents of Senate Joint Resolution 2 spoke after him – saying they were fed […] The post Questions abound at hearing on Montana resolution seeking Article V Convention appeared first on Daily Montanan.
MONTANA STATE・11 DAYS AGO
Daily Montanan

One of the first stories I covered as a reporter was in Fargo, N.D., in 1996. One of the town’s local well-known zealots, Martin Wishnatsky, had again handcuffed himself to an abortion clinic fence in protest of abortion law. With a certain amount of weariness, editors at The Forum dispatched the greenest reporter they could […] The post Stubborn House leaders refuse to condemn violence against reproductive rights organizations appeared first on Daily Montanan.
MISSISSIPPI STATE・11 DAYS AGO
Daily Montanan

Abortion clinic owner in the South: ‘I don’t need a welcome mat’

A looming local ordinance banning abortion clinics, daily protestors and a lawsuit by her landlord do not faze Diane Derzis, owner of the newly established Bristol Women’s Health clinic located about a mile across the Tennessee border in Virginia. Since it opened in July, Derzis’ abortion clinic has also drawn condemnation from the local Catholic […] The post Abortion clinic owner in the South: ‘I don’t need a welcome mat’ appeared first on Daily Montanan.
BRISTOL, TN・6 DAYS AGO
Daily Montanan

Montana lawmakers said lowering costs and expanding patient access will be their top health care goals for the new legislative session. But they also will have to contend with making changes to Medicaid, a management crisis at the Montana State Hospital, and proposals to regulate abortion. Republicans, who hold a veto-proof majority, said they will […] The post Medicaid and abortion top health agenda for Montana lawmakers appeared first on Daily Montanan.
MONTANA STATE・16 DAYS AGO
Daily Montanan

In the quest to appoint a new representative to fill Mallerie Stromswold’s seat in the Legislature, the Yellowstone County Commission did a lot in just a few minutes. Naarah Hastings, a business owner, who recently moved her family from the State of Washington to escape the political environment there, will be traveling to Helena to […] The post Yellowstone County appoints Hastings to fill Stromswold’s seat appeared first on Daily Montanan.
YELLOWSTONE COUNTY, MT・6 DAYS AGO

The Daily Montanan is a nonprofit, nonpartisan source for trusted news, commentary and insight into statewide policy and politics beneath the Big Sky. We seek to cover state government and issues, including public lands, politics, healthcare and education by not only reporting what is happening, but why and how the news affects the lives of Treasure State residents. We are an independent news outlet dedicated to the belief that truth, transparency and trust are essential to a free republic. We are a proud affiliate of States Newsroom, a national 501(c)(3) nonprofit supported by grants and a coalition of donors and readers, which has editors and reporters throughout the country dedicated to relentless coverage of state government, policies and statewide issues.