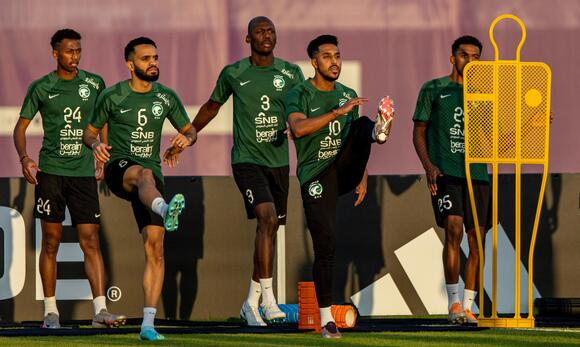 Half a mile to the south of Saudi Arabia’s training pitch, the silhouettes of two camels move slowly against the late afternoon sun. They are carrying visitors along the crest of a sand dune whose slopes are scarred by the tracks of overland vehicles and SUVs. At the bottom, a gargantuan Chevrolet advertisement offers alternative transport options and a long line of semi-permanent structures hawks tourist trinkets. This is the gateway to a region Qatar hopes will bewitch those who want a break from the football: a near-empty expanse of undulating sand that covers the country’s south-eastern interior and is marketed as an outdoor adventurer’s playground.

In truth it hardly resembles a honeypot and that is how its temporary residents like it. The Saudi Football Association stole in quickly to secure this base, at the exclusive Sealine beach resort, two and a half years ago. It is only 25 miles from the border with their country and, an hour’s drive south of Doha, feels cut off from the inner city’s manic energy. They knew from the experience of 2019, when Qatar hosted the Gulf Cup, that the noise and logjams of an urban centre present unwelcome hurdles over the course of a tournament.

So it is to the quiet backdrop of those dunes and, 100 metres in the other direction, a palm-fringed stretch of sand that Hervé Renard leads his players out for practice. The complex is closed to everyone bar the Saudi setup, their loved ones, operational personnel and a small number of visitors who have purchased day passes for a sectioned-off area of beach. One describes himself as “a guest of the emir”; it is the footballers, though, who have reaped the most obvious benefits of local hospitality.

“It’s an unbelievable feeling but we were talking about this and, if we want it to last, we have to qualify from the group,” says Saleh al-Shehri, who scored the equaliser against Argentina and set in train one of the World Cup’s great upsets . Saudi Arabia face Poland next and their task is to repeat the intensity and bravery that bent proceedings to their will last time out. Saturday’s opponents may be considered a rung down from Argentina but Renard’s side would still ordinarily be viewed as underdogs.

Three points would, contrary to every initial expectation, guarantee their first knockout assignment since the Saeed al-Owairan-fuelled campaign at USA 94. “All the odds were against us,” Shehri says. “We believe in ourselves and we worked hard to get here because it wasn’t easy. And I think we proved to everyone that we are worthy of being here.”

Success inevitably begets greed for more but there is an awareness back home that, even if the Saudis fall short from hereon, they have already earned a place in legend . Perhaps they are at their best when the pressure is off. Last month Mohammed bin Salman, the crown prince, met the squad and told them to “be comfortable, play and enjoy the tournament”. That request has been fulfilled so far.

Nonetheless excitement will be at fever pitch on Saturday and venues such as Mrsool Park, a stadium in Riyadh that has been given over to a fan park and giant screen, will teem with anticipation. “We have to make our country and our fans proud,” Shehri continues. “Going through is a dream for us: to get back there after all these years would be amazing.”

Before the session starts, Renard stands in deep conversation with Yasser al-Misehal, the FA president. Misehal makes his way back around the pitch and is soon joined, in the modest bank of seats erected for onlookers, by Renard’s parents. Their arrival brings spontaneous applause: families have been allowed to join the players and staff today, adding to the close-knit feel around a setup happy to be at a remove from the external gaze.

That is where most of the Saudi squad spend their time. They are all domestic-based and only the most dedicated of football followers from further-flung regions could reel off their names before Tuesday. It means that they have no secrets from each other and, having spent a two-month training camp together in the runup to Qatar 2022, felt ready to surprise the outside world. “I think we’ve developed a lot,” Shehri says. “It’s a chance to prove to everyone that Saudi football is getting better day by day.”

Physical duels will, he suggested, be decisive against Poland. It will be a different kind of challenge, perhaps an equally imposing one if Robert Lewandowski has mended his radar, but the opportunity ahead is alluring. During the group stage about 200,000 Saudis are expected to visit Qatar for the party: that number would swell considerably with progress to the last 16. Shehri can see the prize. “We made history and there is still more to come, inshallah ,” he says.

Driving north back towards the capital, along near-empty highways, flares leap high into the darkening sky from the stacks of a sprawling oil refinery that adjoins the stretch of shore next to Sealine. The contrast with the wandering dromedaries is stark and there is a sense that, in this short trip to the Saudis’ base, the raw materials powering the host country’s month-long festival have been set in microcosm.

Saudi Arabia, whose country has its own tension between the private and the tableau shown to the public, intend to keep global eyes on the brighter side this weekend.

Alessia Russo has remained a Manchester United player after Women’s Super League rivals Arsenal tried to sign the England striker before the transfer deadline. The Gunners had been looking to bolster their attack and launched a big-money bid for Russo a few days ago. That bid was rejected by...
3 HOURS AGO
The Guardian

Three Russians under sanctions own UK property via overseas entities

Alexander Frolov, Igor Shuvalov and Vladimir Potanin own properties via BVI, Cyprus and Russia
3 HOURS AGO
The Guardian

Author's CollectionWith the Soviet empire only months away from collapse, its Navy conducted an unprecedented test of its submarine-launched doomsday weapons.
1 DAY AGO
The Guardian

It was the most pivotal of moments. Tied game. Seventeen seconds left. The Kansas City Chiefs with a 3rd and 4 on the Cincinnati Bengals’ 47 in the AFC title game. In preordained fashion, it was Patrick Mahomes who willed his injured leg to join his healthy one and gain just enough yardage to eke out a first down. And then Mahomes was hit out of bounds by Bengals defensive end Joseph Ossai who, up until that gaffe, had played a tremendous game. The extra 15 yards given for the unnecessary roughness penalty was just enough for Harrison Butker to nail the 45-yard field goal and send the Chiefs to their third Super Bowl in four years and further cement Mahomes’s legend.
CINCINNATI, OH・1 DAY AGO
The Guardian

Amid the smoke of war, power in Europe is shifting decisively to the east | Jonathan Eyal

While Germany’s Olaf Scholz was dragging his feet over tanks for Ukraine, the Baltic states and Poland gained moral ground
2 DAYS AGO
The Guardian

What kind of society sends young men to jail and ruins lives because of the lyrics in a song? | Ciaran Thapar

As an expert witness, I have seen case after case in which rap music words become key to a conviction – and it’s wrong, says writer and youth worker Ciaran Thapar
16 HOURS AGO
The Guardian

I think a lot of people think my generation don’t care about politics or aren’t interested. They underestimate how perceptive we are. We’re part of the world too. We sit in classrooms. We know that schools don’t have proper funding and that our teachers aren’t properly paid for the hard work they do.
8 HOURS AGO
The Guardian

‘I knew my son had gone’: Michael Rosen on the moment that changed his life – extract

I’ll start by telling you a story. I’m telling it to you so you know what happened. I’m also telling it to you because it helps me to tell it. And because it helps me, I am saying that if anything like this has happened to you, it may well help you to do the same: to tell your story. You can do this in any way you like. The important thing is to tell it.
2 DAYS AGO
The Guardian

Boris Johnson has said that Vladimir Putin claimed he could have sent a missile to hit Britain “within a minute”, in a call just before the invasion of Ukraine. The former prime minister’s comments came in a three-part documentary for BBC Two looking at the conflict in Ukraine and the lead up to Russia’s invasion in February last year.
2 DAYS AGO
The Guardian

‘What Trump has done is quite arguably the worst crime against the US that a president could commit,’ says J Michael Luttig
3 HOURS AGO
The Guardian

To Leslie is a sad, sweet country song of a movie, with a steel-guitar twang of love and loss. Screenwriter Ryan Binaco was inspired by his own mother for this film, conjuring her memory in the spirit of Barbara Loden’s Wanda (1970) or maybe Scorsese’s Alice Doesn’t Live Here Anymore (1974). Better Call Saul producer Michael Morris makes his feature directing debut. The film is ultimately just a little contrived and its final scene is not entirely plausible, but the drama is always fiercely watchable due to an undoubtedly marvellous performance from Andrea Riseborough – who last week put this little-seen indie picture back into the conversation and made industry headlines with her sensational outsider breakthrough into the Academy Awards best actress nomination list.
TEXAS STATE・1 DAY AGO
The Guardian

Australia defender Harry Souttar has been rewarded for a breakout World Cup campaign with a big-money move to Premier League club Leicester City. The 24-year-old’s signing from Stoke City was confirmed by the Midlands club in a social media post before midnight on transfer deadline day. The reported fee...
24 MINUTES AGO
The Guardian

Government figures, which cannot be verified, showed big rises in travel and hospitality activity during lunar new year compared to the same time last year
18 HOURS AGO
The Guardian

Tuesday briefing: What needs to change to end homelessness

Good morning. In 2019, the Conservative government pledged to end homelessness and rough sleeping by 2024 – a noble goal. But with the next election fast approaching, there is no indication that this target will be achieved. In fact, the problem is getting worse. The Guardian’s social policy editor,...
17 HOURS AGO
The Guardian

‘It was all for nothing’: Chinese count cost of Xi’s snap decision to let Covid rip

When Sunny* thinks back to March last year, she laughs ruefully at the ordeal. The 19-year-old Shanghai student spent that month locked in her dormitory, unable to shop for essentials or wash clothes, even banned from showering for two weeks over Covid fears. In April, the entire city locked down.
2 DAYS AGO