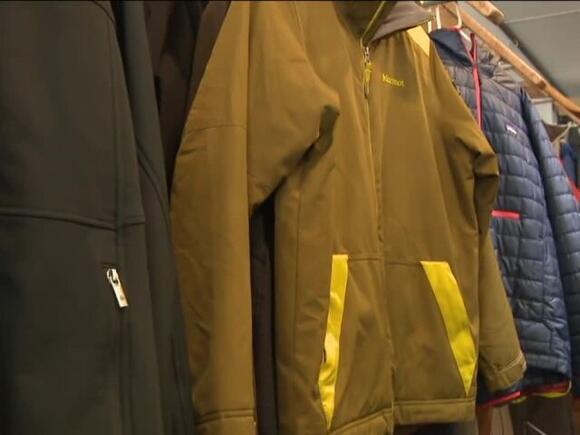 For John Cameron, trying to be part of the solution left him feeling like he was actually part of the problem.

The industrial electrical systems consultant lived on the road using infrared and ultrasonic tools to tell companies how to save energy.

"My passion was sustainability and reducing energy loads," said Cameron. "It's amazing. It's like changing 500 lightbulbs from compact fluorescent to LED. It's a big deal."

Then one day, he reflected on his lifestyle — driving 1,000 miles a week; staying in five hotels a week, flying, and eating out constantly.

"Those numbers made it to where I was not being sustainable," he said, realizing that another part of his job was actually negating his sustainable mission.

So, Cameron stepped away from the work. And in August, he opened MKE Outdoor Indoor Exchange, Wisconsin’s ‘Cradle-to-Cradle’ gear store, as it's called on his website .

The exchange sits at the intersection of Delaware and New York in Bay View. Cameron carries a large variety of name-brand outdoor clothing, tech, and other gear — almost all of it used or recycled.

“And I have to say my wool section is amazing. These are all handpicked, mostly vintage," he said.

Cameron is part of an exploding second-hand market. It's expected to more than double by 2026 to $82 billion, according to GlobalData, as reported by online consignment ThredUp.

Online resale is driving the trend, especially after the pandemic forced more shoppers to the web and to apps.

"When you think about the production of a new T-shirt, it uses about 2,700 liters of water," said Marissa Jablonski, a sustainability expert and the executive director of UW-Milwaukee's Freshwater Collaborative of Wisconsin.

“I think in the U.S. we’re decreasing the stigma of buying used clothes, finally, because we are such mass consumers. And it's helping decrease our water energy, impact on planet earth," she said.

Other research from GlobalData via ThredUp shows more than 40 percent of all consumers now think second-hand first, with Gen Z and millennial buyers leading the way.

Cameron has already outgrown his brick-and-mortar and offers products online as well.

He wants to scale and envisions stores someday in places like Ann Arbor or Duluth.

“I dreamt this up in March this year. I woke up at 3 a.m. and wrote a business plan. And I’ve been going about 110 mph ever since," said Cameron.

For Cameron, it took a big risk to find a solution that fits his mission.

“I took my credit cards and maxed them out. I just paid one off last night, officially. I’m crawling out of the whole," he said.

The exchange is located at 3044 S Delaware Ave in Milwaukee. And, Cameron said, they'll be open on Black Friday.

You can find products online you won't find in the shop at: https://www.mkeoutdoorindoor.com/

Milwaukee World Festival has withdrawn its sponsorship lawsuit against Klement's, according to our partners at the Milwaukee Business Journal.
MILWAUKEE, WI・3 DAYS AGO
TMJ4 News

Wind chills are already well below zero this evening and they'll eventually dip into the 20s below zero overnight. A wind chill advisory goes into effect for all of southeast Wisconsin until 10 am.
MILWAUKEE, WI・12 HOURS AGO
TMJ4 News

Milwaukeeans joined others in a nationwide show of solidarity following the death of Tyre Nichols in Memphis.
MILWAUKEE, WI・11 HOURS AGO
TMJ4 News

Some state lawmakers are reintroducing legislation this week that would allow Milwaukee to install red light cameras across the city.
MILWAUKEE, WI・44 MINUTES AGO
TMJ4 News

Meet our Pawsitively Milwaukee Pet of the Week: Fancy!

Fancy is a one-year-old cat staying with the Humane Animal Welfare Society of Waukesha County. Staff say she gets along great with dogs.
MILWAUKEE, WI・6 HOURS AGO
TMJ4 News

There's plenty to check out from the Admirals game featuring a post-game concert, to a beer garden and food tasting at the Racine Zoo.
MILWAUKEE, WI・4 DAYS AGO
TMJ4 News

TMJ4's @ The Table: How to have an alcohol-free lifestyle in Milwaukee

The first month of the year is known as Dry January. This month many people will give up - or attempt to give up - alcohol for all of January.
MILWAUKEE, WI・4 DAYS AGO
TMJ4 News

A new vendor is coming to Crossroads Collective in Milwaukee and it's a non-alcoholic cocktail bar!
MILWAUKEE, WI・3 DAYS AGO
TMJ4 News

Broadcaster of Bucks, Brewers games in Wisconsin may file for bankruptcy

The company that helps broadcast Milwaukee Bucks and Milwaukee Brewers games may file for Chapter 11 bankruptcy. So far, it seems a bankruptcy won't impact the games you are watching.
MILWAUKEE, WI・3 DAYS AGO
TMJ4 News

Milwaukee firefighters responded to a house on fire near 57th and Sheridan early Monday morning, according to a spokesperson.
MILWAUKEE, WI・11 HOURS AGO
TMJ4 News

Wisconsinites brace for snowy road conditions through the weekend

After a mild start to the year snow is finally falling in southeastern Wisconsin. But with that beautiful winter scene comes slick and icy roads and dangerous conditions for drivers.
MILWAUKEE, WI・1 DAY AGO
TMJ4 News

Alderman's comments spark discussion on the stigma around affordable housing

​Remarks made by Brookfield Alderman Kris Seals regarding the future of an affordable housing initiative coming to the city have housing advocates speaking out.
BROOKFIELD, WI・4 DAYS AGO
TMJ4 News

The first thing you notice about Yaroslav Askarov when he takes off his mask? The mustache. Russians Egor Afanasyev and Askarov pal around, learning the culture of America and Milwaukee.
MILWAUKEE, WI・2 HOURS AGO
TMJ4 News

More snow is on the way Saturday and this one is going to pack more of a punch. Look for snow to pick up around 10 a.m. on Saturday and continue all day and into Saturday night.
MILWAUKEE, WI・3 DAYS AGO
TMJ4 News

Owner of Blue Bat to open restaurant in old Wahlburgers

Milwaukee's Third Ward is getting a new restaurant after Wahlburgers closed its doors earlier this year.
MILWAUKEE, WI・4 DAYS AGO
TMJ4 News

The Milwaukee Police Department is warning of a "crime trend" of armed robberies and car break-ins occurring in the city's downtown entertainment areas.
MILWAUKEE, WI・2 DAYS AGO
TMJ4 News

The seven LUMIN schools located in Milwaukee, Wauwatosa, and Racine are selling lemonade to raise money for Children's Wisconsin. This is their second year after raising $5K last year.
WAUWATOSA, WI・5 DAYS AGO