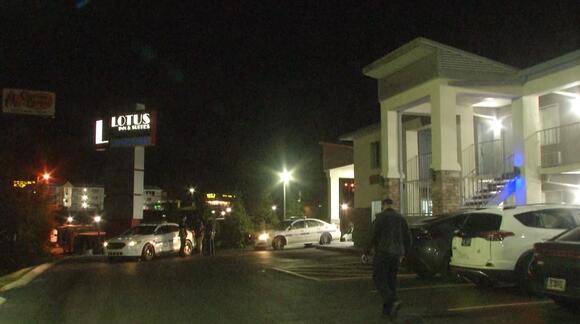 NASHVILLE, Tenn. (WKRN) — A man accused of setting a mattress on fire at a Donelson, Tennessee motel before attempting to steal a responding fire truck has been booked into the Metro jail.

The fire happened around 1:25 a.m. on Nov. 10 at the Lotus Inn off Interstate 40 along Percy Priest Drive.

According to the Metro Nashville Police Department, Michael Morris set the mattress on fire inside room 211, causing flames and smoke to fill the motel room.

But before first responders could arrive, several men rushed to room 211 to take action. One man told News 2 that he, along with the others, had to physically remove Morris from the smoke-filled room and throw the mattress into the parking lot.

While all this was happening, police said Morris pushed his way into a downstairs room and got into a brawl with another man, who was with his girlfriend and son.

By this point, members of the Nashville Fire Department had pulled up to the scene and begun attending to the fire. Morris then reportedly hopped into the driver’s seat of the truck and tried to steal it, police said.

After firefighters pulled Morris out of the fire truck, authorities said the 31-year-old stole a van and drove it to another motel nearby, where he reportedly barged into a guest’s room and locked the door.

Morris was then taken into custody and moved to Vanderbilt University Medical Center, where he received treatment for burns and smoke inhalation.

He was booked into the Metro jail Wednesday afternoon and charged with aggravated arson, burglary and theft of a vehicle worth $250,000 or more. His bond was set at $400,500.

A massive high altitude balloon passed through the St. Louis area Friday afternoon. A NOAA computer model show which states it could pass over next.
NASHVILLE, TN・2 DAYS AGO
WJHL

The change would only affect less than a third of a mile of the roadway near the Capitol building.
NASHVILLE, TN・3 DAYS AGO