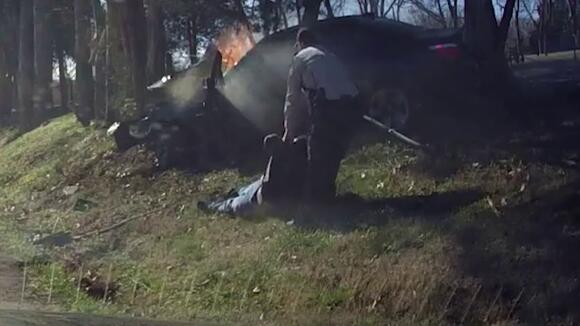 THOMPSON’S STATION, Tenn. (WKRN) — A Williamson County deputy is being hailed a hero after pulling a man from a burning car.

It happened Monday afternoon in the Burwood community in southern Williamson County. Much of the drama was captured on the body cameras of the two arriving officers.

According to the supervisors with the 23rd Judicial Drug Task Force, this began in Dickson County when a black BMW blew by drug agents. Agents pursued the black BMW, but when the chase hit speeds over 120 miles per hour, agents called it off.

The agency put out an area-wide “BOLO,” and when that black BMW entered Williamson County, deputies got behind the vehicle. Corporal Jimmy Gillam was heard saying the black vehicle he was behind was doing 65 miles per hour just as it crested a hill and crashed into trees.

The BMW was driven by Winston Thompson, a 22-year-old out of Nashville. Gillam stopped, radioed for EMS, then got out and extended his weapon.

“Show me your hands,” Gillam can be heard saying on body cam. Gillam waited a few moments, unclear what was happening inside the vehicle with very dark windows.

As Gillam waited for his backup, the BMW began to catch fire.

That’s when the 12-year veteran jumped into action, breaking out the window, opening the door and encountering the unconscious driver. “You ok?” Gillam can be heard asking on the body camera video.

With flames and smoke filling the cockpit of the car, the 46-year-old deputy pulled the unconscious man from the burning car. You can hear Gillam ask aloud, “Anyone else in the car? [I] can’t see”

By this time, Deputy C.H. King has arrived on the scene.

As Deputy King ran back to get his fire extinguisher, Cpt. Gillam risked his own safety by going back into the flames and smoke a second time to check the car. He was immediately overcome by thick, toxic, choking smoke.

By that time, Deputy King hits the flames with the extinguisher. “Anybody inside?” Deputy King can be heard yelling on the body camera.

Coughing stridently, Deputy Gillam returned to the blaze yet again, this time with his fire extinguisher, also trying to knock down the fire to continue to search the badly burning car.

“I can’t tell,” Deputy King yells. After a few more moments, it was learned that Thompson was the sole occupant.

Within minutes, the flames continued to grow, and ammunition that was inside the suspect’s BMW began to explode. When this happened, the two deputies went to the groggy and injured driver and pulled him even farther from the scene for safety.

Deputy Gillam was checked out by first responders and has no lasting effects.

The suspect was transported to Vanderbilt where he is said to be in critical condition.

“Yes, he is. He exemplifies a true public servant,” said Sheriff Dusty Rhoades when asked if Cpl. Gillam is a hero.

When Thompson is released from the hospital, he will be charged with evading arrest, speeding and driving without a license.

News 2 checked Williamson, Maury and Sumner counties, along with Metro, and there are no prior arrests for the 22-year-old, whose life is saved on his 22nd birthday.

Nurse Caitlyn Kaufman was on her way to work as an ICU nurse at Ascension Saint Thomas West when she was shot and killed on Interstate 440.
NASHVILLE, TN・3 DAYS AGO
WJHL

A massive high altitude balloon passed through the St. Louis area Friday afternoon. A NOAA computer model show which states it could pass over next.
NASHVILLE, TN・11 HOURS AGO
WJHL

The change would only affect less than a third of a mile of the roadway near the Capitol building.
NASHVILLE, TN・1 DAY AGO