‘We are Ukrainians. We’re strong’: morale the key in Kyiv as winter sets in 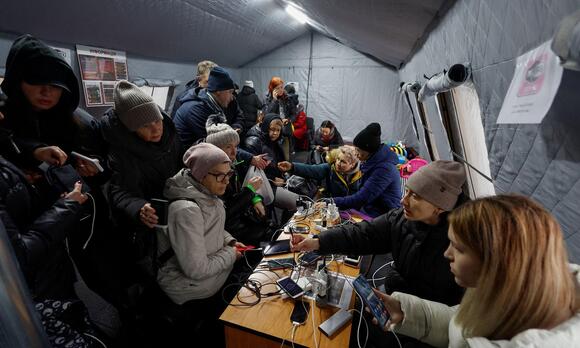 The residents of Kyiv taking shelter in their local “invincibility station” were well aware that their own morale has become the central battlefield of the war, and it is not territory they are prepared to concede to Vladimir Putin.

The insulated grey tent set up on a street corner in the Pecherskyi district of Kyiv, one of thousands established around the country this week, was offering electricity, warmth, tea and sandwiches after the latest Russian onslaught.

“It’s like 24 February, when the invasion started, and the beginning of March, when people really came together,” said Maryna Honcharova, who was bundled up in a winter coat in the middle of the tent. If this was Putin’s grand plan for grinding down the will of the people, she added, it had backfired.

“It just makes the anger towards Russia grow stronger. We just curse and hate Russia more.”

There were murmurs of agreement from around the tent. Those who had been chatting in Russian earlier switched to Ukrainian to drive home the point.

A salvo of cruise missiles on Wednesday had knocked out the national power grid, and with it the water supply for much of the country. On satellite images, Ukraine stood out as a pitch-black island. Kyiv was entirely dark on Wednesday night apart from a few public facilities and businesses with generators.

When Thursday dawned, 70% of the capital was still without power. The temperature outside hovered just above zero and a frigid rain fell, melting the snow of recent days and filling the streets with dark slush. There was water everywhere, but very little to drink. There was no power for the water pumping stations.

Oksana Yakovleva, a dentist, and her actor husband, Yurii, had made preparations for such an eventuality by filling up every container they had with water. They would have filled the bathtub if they had not been afraid their three cats would fall in. Meanwhile, life went on. Yurii’s theatre was still putting on plays.

“Nobody cancels. They come for the positive energy,” he said. Oksana pointed out that her 87 year-old mother had returned to work, teaching in a music school, unbowed.

“She remembers liberation on 9 May 1945,” Yakovleva said.

Russia has used the iconography of the second world war to maintain Russian public support for the invasion. Ukrainians are quick to point out that ultimately victorious struggle is their legacy too, and they draw from it lessons in resilience.

The repeated attacks, which President Volodymyr Zelenskiy has called a crime against humanity , are having a cumulative impact on Ukraine’s critical infrastructure. Farid Safarov, the deputy energy minister, said there had been a total blackout after the missile attacks on Wednesday afternoon.

“We had no synchronised single energy system. It was split into parts, so I may say it was 100% out of order,” Safarov said.

Nevertheless, by 4pm on Thursday, the national grid had been pieced back together again as a result of the intensive efforts of utility workers, rushing to restore power plants, high-voltage lines and transformers. They did so under the constant threat of Russian “double tap” tactics, in which a second strike targets damaged sites with the aim of killing humanitarian and repair workers.

“We have a couple of facilities that were struck at least eight times. The energy front is the second front of the war,” Safarov said, describing the engineers risking their lives doing the repairs as “energy soldiers protecting the country”.

To properly rebuild Ukraine’s energy infrastructure would require a great deal of imported technology and outside funding, but that will be futile, Safarov pointed out, without adequate missile defences.

“Le​​t’s imagine that we received all the equipment we need in one day and it took us one day to install that equipment, but then there is a new rocket attack,” he said. The priority was to “create a shield in the sky in order to protect our energy infrastructure facilities”.

At the centre of the Pecherskyi invincibility station was a small table covered with a spaghetti-like pile of cables where locals were charging their phones and power packs. On one side there was a counter with water and snacks.

The whole place measured just a hundred sq metres at most and was almost full even by early afternoon, when power and water had been restored to most of the district. In what is likely to be a long and bitter winter, with the power grid under relentless Russian fire, Pecherskyi is going to need a much bigger tent, or many more of them.

Oleksandr Harchenko, a 32 year-old receptionist at the M15 barbers, across the road from the invincibility station, pointed out that the local response to the Russian attacks was not entirely one of stubborn resolve.

“I went to get water from the local well, and there were some people who were a bit panicky,” Harchenko said. “We went 24 hours without water and electricity, and they restored it pretty fast. It could get a lot worse.”

The enemy on the other side of the woods can be heard when the wind blows towards the deep Ukrainian trenches. Russian voices carry in the freezing cold air as do the growls of the tanks and the buzz of the kamikaze and reconnaissance drones. But that is not all...
20 HOURS AGO
The Guardian

Recently, I stood on a raised court podium being cross-examined by a roomful of barristers. I was there as an “expert witness” to the case in hand – a group of young Black men from a small English city charged with conspiracy to possess a firearm – which mostly involved commenting on the extensive use of rap lyrics as evidence.
2 DAYS AGO
The Guardian

The U.S. government has warned that the war in Ukraine has "raised geopolitical tensions in the Arctic"
MICHIGAN STATE・15 HOURS AGO
The Guardian

When I was a child, and friends asked me what I would do if I ever met my dad, I always replied that if I had a gun I would shoot him. I was a young teen in a small east Yorkshire market town with, at best, minor connections to a burgeoning petty criminal underworld. Even if I had been able to get a gun, I would have been more likely to shoot off a finger in error than aim correctly at my absent father. It was an empty threat that clearly revealed a deep, simmering anger.
1 DAY AGO
The Guardian

A nine-year-old girl who had a neighbor call the police on her as she worked to eradicate invasive insects from her home town has earned honors from one of the US’s most prestigious universities. The Yale School of Public Health earlier this month held a ceremony citing Bobbi Wilson’s...
CALDWELL, NJ・2 DAYS AGO
The Guardian

On the outskirts of Tournai, a sleepy medieval town in the gentle, Brueghelian landscape of the French-speaking part of Belgium, there is an unassuming grey hangar, barely hidden behind a fence. Inside are rows upon rows of German-made Leopard 1 tanks and other heavy fighting vehicles – some of the same types of weapons that top Ukraine’s military wishlist.
1 DAY AGO
The Guardian

It was the most pivotal of moments. Tied game. Seventeen seconds left. The Kansas City Chiefs with a 3rd and 4 on the Cincinnati Bengals’ 47 in the AFC title game. In preordained fashion, it was Patrick Mahomes who willed his injured leg to join his healthy one and gain just enough yardage to eke out a first down. And then Mahomes was hit out of bounds by Bengals defensive end Joseph Ossai who, up until that gaffe, had played a tremendous game. The extra 15 yards given for the unnecessary roughness penalty was just enough for Harrison Butker to nail the 45-yard field goal and send the Chiefs to their third Super Bowl in four years and further cement Mahomes’s legend.
CINCINNATI, OH・3 DAYS AGO
The Guardian

From monogrammed luggage to unerring faith, a sale of Talley’s belongings shows the caring, complicated man behind the unforgettable image. If you’re in the market for a size 13 pair of Manolo Blahnik snakeskin evening slippers edged with crimson satin ribbon, then 15 February could be your lucky day. At an auction at Christie’s in New York of the personal estate of André Leon Talley, the former American Vogue creative director who died last year, they might be yours for a guide price of £400. A Chanel navy silk faille opera coat could be snapped up for about £3,000 (scattered “sun damage” is noted), while two extra-large Birkin bags look a steal at £4,000. There are no fewer than 29 Louis Vuitton trunks up for grabs (including one that made a cameo appearance in 2008’s Sex and the City film), along with a Prada coat in white crocodile and an orange liveried Hermès bike that Talley never rode but kept in storage at the Ritz in Paris.
NEW YORK CITY, NY・1 DAY AGO
The Guardian

Ukraine planned to push for western fourth-generation fighter jets. Plus, why circadian-rhythm shaming needs to stop
FLORIDA STATE・1 DAY AGO
The Guardian

A 22-year-old Virginia basketball coach has been fired after being accused of attempting to pass herself off as one of her 13-year-old players during a game. According to Norfolk’s WAVY TV 10, when one of the members of the Churchland junior varsity girls basketball team in Portsmouth was out of town earlier this month, Arlisha Boykins stepped in and impersonated the absent player in their game against Nansemond River.
VIRGINIA STATE・1 DAY AGO