Can Sleep Apnea Cause Gastrointestinal Problems? 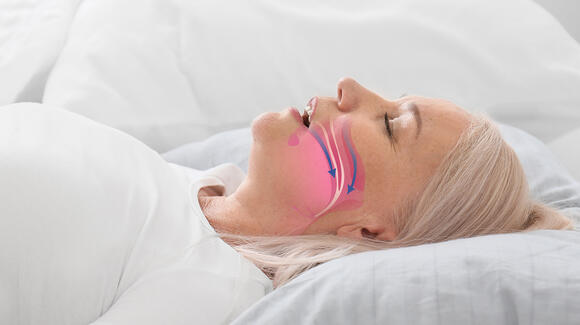 Sleep apnea is more than just a nuisance, it can give rise to a number of health problems, according to a 2019 study published in the Journal of Clinical Sleep Medicine. Also known as obstructive sleep apnea (OSA), the condition has been associated with cardiovascular, metabolic, and neurologic diseases. Another study published in the Journal of Thoracic Disease notes that it's mostly seen in men, but it can ultimately affect anyone.

People with sleep apnea experience lapses in breathing as they sleep due to their upper airways collapsing or being obstructed (via Johns Hopkins Medicine ). This can cause snoring, snorting, or choking sounds as they struggle to inhale and exhale.

The Mayo Clinic notes how the sleep airway disorder can get in the way of a decent night's sleep. People with sleep apnea often wake up in the middle of the night, which prevents them from entering the deep and restorative phases of sleep. They may feel groggy and fatigued, and fragmented sleep can have an effect on their ability to function the next day.

High blood pressure, stroke, diabetes, and cancer are just some of the conditions that have been linked to sleep apnea (via Journal of Clinical Sleep Medicine). Gastrointestinal problems are another common consequence of the sleep disorder. Research shows that people with sleep disturbances like sleep apnea often experience digestive symptoms such as irritable bowel syndrome (IBS), acid reflux, and abdominal pains. Read on to find how sleep apnea can lead to poor gastrointestinal health.

It Alters Your Gut Bacteria 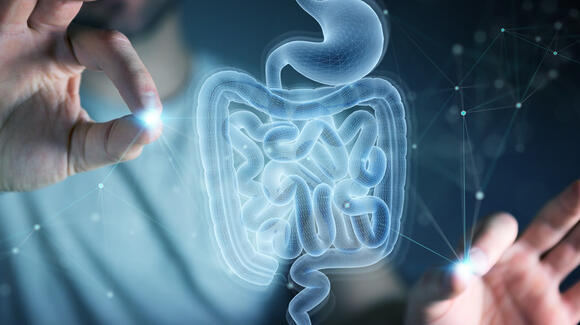 One of the main ways in which sleep apnea can negatively affect your gastrointestinal health is by upsetting the balance of your gut bacteria. According to Medical News Today , the lower levels of oxygen caused by sleep apnea can boost some types of gut flora that thrive without oxygen while harming others that require it. Our gastrointestinal well-being, and perhaps our health in general, is shaped by the harmony of bacteria in the digestive tract . When this is thrown out of whack, it can have a negative domino effect on other aspects of our health.

Some researchers have discovered that children who snore have more harmful bacterial strains and fewer friendly ones than those who don't snore, per research published in the Journal of Clinical Sleep Medicine. It's believed that snoring causes inflammation in the body, which prompts adverse changes in gut microbiota. Researchers also looked at nasal microbiota; they found that patients with sleep apnea were more likely to have problems with their nasal biome compared to patients without sleep apnea.

It May Lead To Peptic Ulcer Bleeding 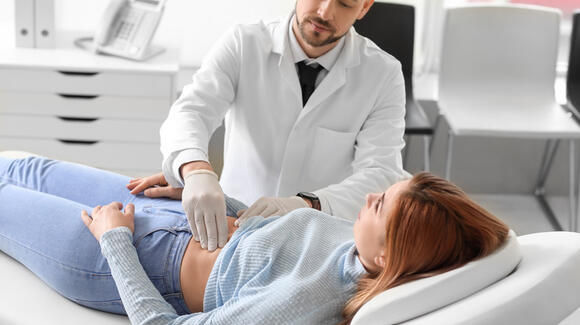 Peptic ulcers are painful sores that emerge on the esophagus, stomach lining, or the upper region of the small intestine (via Nature Portfolio ). It's believed that peptic ulcers can develop out of the presence of bacteria in the gut, specifically a strain that's called Helicobacter pylori (H. pylori). Some studies have shown that sleep apnea may also play a role in the growth of peptic ulcers, per The American Journal of Medicine. Patients stop breathing throughout the night, which can cause intermittent hypoxia (a lack of oxygen), sympathetic nervous system activation, and systemic inflammation . Each of these activities can lead to the onset and development of peptic ulcers.

More specifically, when oxygen levels plummet in the body's tissues due to obstructed breathing, the dual trigger of sympathetic activity and inflammation in the body may increase levels of endothelial growth factor C -- a protein that's suggested to contribute to the development of peptic ulcers, according to a 2019 study published in Scientific Reports.

It Is Associated With Inflammatory Bowel Disease 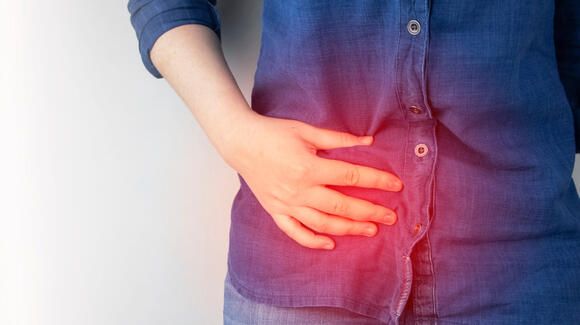 People with sleep apnea are more likely to have inflammatory bowel disease, including Crohn's disease and ulcerative colitis, according to a 2020 study published in The American Journal of Gastroenterology. This may be due to inflammation in the airways, which can arise from snoring and compromised breathing. Another study from 2019 notes that the relationship between any kind of impaired sleep (including from various primary sleep disorders like sleep apnea) and inflammatory bowel disease is thought to be bidirectional, though the causal link between the two remains unclear.

According to a 2014 study published in Clinical Gastroenterology and Hepatology, poor sleep may contribute toward inflammatory bowel diseases by having a harmful impact on immune health. When people are sleep deprived or constantly waking up throughout the night, they're more likely to have lower levels of interleukin 2. This is an important immunomodulatory cytokine that plays a role in regulating the immune system.

Research also reports that people with inflammatory bowel disease are more likely to develop sleep apnea. Again, this can be attributed to inflammation that goes side by side with inflammatory diseases, and increases individuals' risk of other illnesses including cardiovascular problems.

It Has Been Linked To Colon Cancer 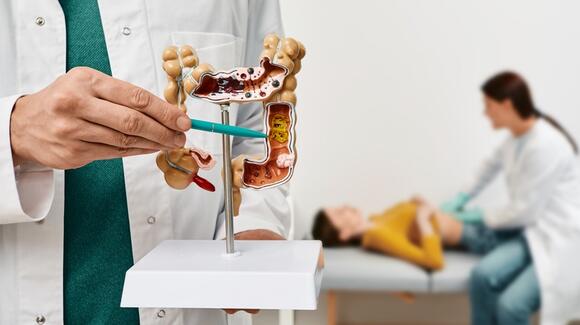 On the more severe end of the gastrointestinal spectrum, sleep apnea could elevate your risk of some cancers, according to 2017 research from the journal Gastrointestinal Endoscopy. The meta-analysis found that people with sleep apnea had a higher chance of developing colorectal cancer , which begins in the colon or rectum.

Insufficient sleep is one of the unfortunate side effects of sleep apnea, and is strongly associated with an increased cancer mortality. A 2011 study from the journal Cancer discovered that sleeping less than six hours per night can bump up individuals' risk of colon cancer by nearly 50%. Patients who reported having a shorter duration of sleep were more likely to be diagnosed with the precursor to a cancer tumor, known as a colorectal adenoma.

The direct cause of colon cancer remains unclear (via Cancer). However, the study authors hypothesized that the increased risk that patients with sleep apnea face may be due to a rise in insulin resistance, or the drop in melatonin production that comes along with sleep deprivation. Other researchers have suggested that overnight hypoxia caused by obstructed breathing might be the culprit (via American Journal of Respiratory and Critical Care Medicine).

It Can Cause Acid Reflux 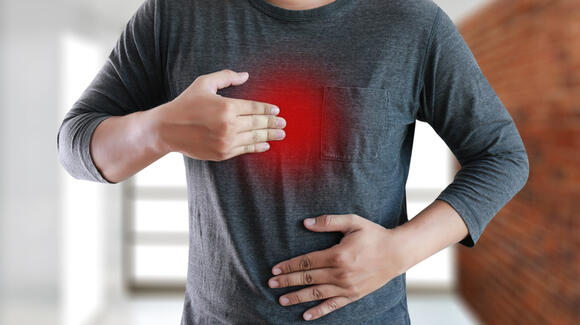 Based on the findings of a 2003 study from the Archives of Internal Medicine, treating sleep apnea with a continuous positive airway pressure (CPAP) machine helped to significantly reduce the frequency of nocturnal esophageal acid exposure. Similarly, a study published in The Laryngoscope found that treating acid reflux symptoms was an effective way to improve sleep apnea.

CPAP therapy is a commonly prescribed and effective treatment for sleep apnea, per the Journal of Clinical Sleep Medicine. This involves wearing a mask that works by blowing a stream of humidified air into the back of the throat. It keeps the airway open and helps prevent lapses in breathing during sleep.

Whether or not you think you need treatment for sleep apnea, it's important to get your symptoms checked out and seek advice from a healthcare professional who can point you in the right direction, notes Asthma & Lung UK . There are a number of resources and strategies that you could try, which could help stop your condition from having a long-term impact on your health.

Read this next: Health Symptoms That Are Serious Red Flags

Is Stomach Bloating A Symptom Of A Vitamin D Deficiency?

A bloated stomach can be a symptom of food intolerance, constipation, or PMS. But can stomach bloat also be caused by a vitamin D deficiency? Let's find out.
6 DAYS AGO
Health Digest

Walking pneumonia, while mild compared to its traditional counterpart, should still be treated by a medical professional. Here are the symptoms to look out for.
6 DAYS AGO
Health Digest

What To Expect After Getting Cortisone Injections

Cortisone injections can help reduce inflammation and lessen pain localized to particular areas of the body. Here's what to expect after getting an injection.
2 DAYS AGO
Health Digest

Is Paxlovid Safe For All People Over Age 65?

Experts advise elderly people infected with COVID to seek immediate antiviral treatment. But is the most popular treatment, Paxlovid, safe for people over 65?
5 DAYS AGO
Health Digest

Flaxseed's versatile nature is what makes it so therapeutic. However, it's important to pay attention to the medications that you are taking while consuming it.
3 DAYS AGO
Health Digest

Can You Overdose Just By Touching Fentanyl? A Substance Use Expert Weighs In

To find out if one can overdose on fentanyl through physical contact, we spoke to Megan Tangradi, clinical director at Achieve Wellness & Recovery.
3 DAYS AGO
Health Digest

Myths You Should Stop Believing About Parkinson's Disease

Parkinson's disease can be a scary diagnosis, partly because of the many myths surrounding the condition. Here's the truth behind some of the most common ones.
7 DAYS AGO
Health Digest

What Are The Most Common Causes Of Cellulitis?

Cellulitis can cause discomfort in a variety of ways. Therefore, getting to the cause of the problem will eventually be beneficial in the long run.
1 DAY AGO
Health Digest

How Preconceived Autism Assumptions May Have Led To Years Of Underdiagnosis

A new study has identified a possible factor contributing to the underdiagnosis of autism and preconceived notions about autism and intellectual disability.
5 DAYS AGO
Health Digest

Bacterial and viral meningitis have some distinct differences between them. Here's what to know about the causes, symptoms, and treatment for each.
5 DAYS AGO
Health Digest

Insomnia affects up to 50% of Americans. While many use sleeping pills to combat insomnia, a new study suggests they may be linked with dementia.
1 HOUR AGO
Health Digest

How Is Pericarditis Treated?

In some cases, pericarditis can lead to serious complications, like pericardial effusion. Luckily, there are different methods of treatment.
5 DAYS AGO
Health Digest

Ginkgo Biloba Could Be Dangerous If You Already Take These Medications

Before you consider taking ginkgo biloba, you should make sure you aren't taking any medications that can have a negative interaction with it.
4 DAYS AGO
Health Digest

In an exclusive interview with Health Digest, Jamie Feit, MS, RD, breaks down which 3 daily supplements you should incorporate into your routine and why.
4 DAYS AGO
Health Digest

When Should You Become Concerned About Acid Reflux?

For some, treating acid reflux may consist of some over-the-counter medication. However, knowing when it can turn into something more serious is crucial.
3 DAYS AGO
Health Digest

The CDC has launched an investigation regarding bacteria-related infections stemming from EzriCare Artificial Tears. Here's everything you need to know.
COLORADO STATE・1 DAY AGO
Health Digest

Pregnancy takes a toll on the body, particularly if you've been diagnosed with preeclampsia. Here's how your heart health may be affected after preeclampsia.
7 DAYS AGO
Health Digest

Pistachios aren't just a delicious snack, they also have certain health properties that can aid in weight management. Here's what to know.
4 DAYS AGO