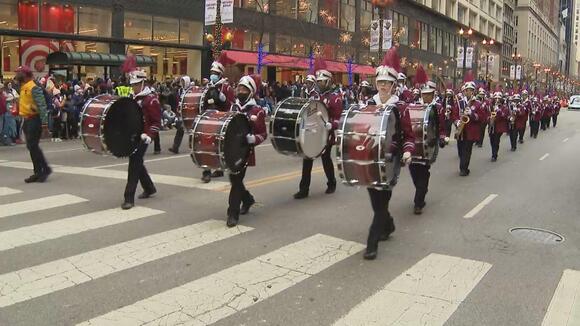 CBS 2's Mugo Odigwe said "it feels like a party" as last preparations were made along the parade route on State Street.

The parade kicked off at 8 a.m. It started at State Street and Ida B. Wells Drive and headed north to Randolph Street.

The traditional large high-flying balloons, as well as dance acts, marching bands, floats, and even some special guests were featured.

Among the performers were the Thistle and Heather Highland Dancers from west suburban Riverside. Twenty to 25 dancer performed traditional Scottish steps.

Odgiwe showed off her moves with the dance group live on air.

The dance group has performed in the Chicago Thanksgiving Parade for over 30 years.

Activists coming together in Chicago area to honor Tyre Nichols

CHICAGO (CBS)-- Organizations are honoring Tyre Nichols in the Chicago area Monday after the city of Memphis released video showing his violent January 7 police arrest.Five former Memphis police officers were fired and charged with murder in the death of Nichols, a Black man who died three days after being beaten in a traffic stop. Video footage of Nichols' arrest was released Friday evening.     Monday at 1 p.m., Lake County Black Lives Matter organizers plan to gather at the Waukegan Police Department. In a statement, they applauded the swift action of the Memphis police chief for firing the five officers involved in Nichols' death. They hope it's "a template for the city of Waukegan."Then, at 6 p.m., several groups will come together for a rally at Federal Plaza in downtown Chicago. The Chicago Alliance Against Racist and Political Repression said they stand in solidarity with Nichols' family, and want the officers charged with Nichols' murder to also face federal charges.
CHICAGO, IL・6 HOURS AGO
CBS Chicago

CHICAGO (CBS) -- Parishioners protested outside Chicago's Holy Name Cathedral Sunday to send a message to Cardinal Blase Cupich. They want to keep the building that once housed their beloved church from being sold. A small group chanted and held signs, urging Cupich not to sell Saint Adalbert Catholic Church in Pilsen. The church closed in 2019, but the Saint Adalbert's Rosary Group says the building is architecturally and culturally important to the Polish and Mexican communities it served. "Getting the sale stopped is a smaller goal along the way," said Richard Smaglick, with the group. "The main goal is to reopen this church as a sacred space of some sort, a shrine, a monastary or an active church. We're very hopeful that we can make that happen. Last fall, former congregants protested outside the shuttered church trying in vain to keep the Archdiocese from removing a beloved statue. Protesters say they're also concerned about reports a Florida man could buy the church. They say he has turned other religious buildings into questionable businesses. The Archdiocese acknowledged the group's protests, but did not address their concerns.
CHICAGO, IL・19 HOURS AGO
CBS Chicago

CHICAGO (CBS) -- The City of Chicago could start moving hundreds of migrants into an abandoned school as early as Monday. CBS 2 has been following the story for months, but now it seems it is actually happening. On Sunday CBS 2's Sabrina Franza saw some city-owned vehicles driving in and out, possibly making last minutes fixes before the week begins. The school, formerly Wadsworth Elementary School, is ready, the city says, to accept 250 migrants -- to start. At a community meeting Saturday, city officials did not answer neighbors' questions about a cap on that number. "It's not about black against brown it's...
CHICAGO, IL・21 HOURS AGO
CBS Chicago

CHICAGO (CBS) -- Crowds made their way to Chicago's Chinatown Sunday afternoon to celebrate at a Lunar New Year parade, but there were also many eyes looking out for anything suspicious after last week's deadly shooting int Monterey Park, California. As CBS 2's Shardaa Gray reports, the Chicago Police Department is beefing up security. In addition to the extra security came slight changes to the start of the parade. Fireworks normally kick off the beginning of the annual celebration, but not this year. "Typically we would start the parade off with a big bang, but in light of the events of last week,...
CHICAGO, IL・22 HOURS AGO
CBS Chicago

CHICAGO (CBS)-- A church in Ukrainian Village was vandalized. Sunday night, windows were boarded up at Holy Trinity Orthodox Cathedral.Overnight, Father Alexander Koranda confirmed he is the one who found the damage along with the rocks thrown inside. The church has filed a police report and Chicago police are now looking for the person who did it.
CHICAGO, IL・6 HOURS AGO
CBS Chicago

CHICAGO (CBS) -- The Ukrainian community is hosting its annual Caroling Together Festival - celebrating the birth of Jesus.Starting at 2 p.m., more than 200 performers will share their talents at St. Nicholas Ukrainian Cathedral near Oakley and Chicago.Organizers are asking for a $5 donation at the door.Any money collected will support medical treatments for soldiers in Ukraine.
CHICAGO, IL・1 DAY AGO
CBS Chicago

CHICAGO (CBS) -- Chicago Mayor Lori Lightfoot and those running for her office are focusing on the video of Tyre Nichols as Memphis police officers pull him out of his car during a traffic stop, shoot him with a stun gun and repeatedly beat him. On Saturday those running for mayor highlighted how Chicago can move forward when it comes to police accountability. "Five people who swore an oath to serve and protect treating another human being like that is absolutely reprehensible," Lightfoot said at a Lunar New Year parade on the city's North Side. "The fact that they chased him...
CHICAGO, IL・1 DAY AGO
CBS Chicago

AURORA, Ill. (CBS) -- With frigid weather on the way, the City of Aurora is opening its temporary warming center for one week starting today.The Aurora Transportation Center, located at 233 North Broadway, will be open each night from 7 p.m. to 7 a.m. through Feb. 5. Staff and security guards will be on-site at all times to make sure everyone stays safe.
AURORA, IL・1 DAY AGO
CBS Chicago

CHICAGO (CBS) -- Even with snowfall this weekend, baseball will take center stage at the Goodman Theatre starting tonight.It's the Chicago debut of "Toni Stone" - the story of the first woman to play regularly in a men's professional baseball league.The production focuses on the racist and sexist challenges she had to face on and off the field. The performance takes place on a baseball stadium set.The performance starts at 8 p.m. and runs through Feb. 26. Seats are still available for tonight's performance.
CHICAGO, IL・2 DAYS AGO
CBS Chicago

CHICAGO (CBS)-- Cardinal Blase Cupich kicked off Catholic Schools Week with a visit to Academy of Saint Benedict the African Monday morning.The Cardinal attended the morning assembly at the Englewood school. This year's theme for Catholic Schools Week is "Faith. Excellence. Service." He enjoyed a song with students. He also thanked the faculty, parents and the community for helping children with their education.He told the children they aren't just students to him."You're something else to me, you're friends," he said. "I consider you my friends and I'm going to be there each and every day looking for ways your education can continue."Since 1974, Catholic Schools Week has been an annual celebration of religious education in the U.S.
CHICAGO, IL・4 HOURS AGO
CBS Chicago

CHICAGO (CBS) -- The Chicago Transit Authority (CTA) is still trying to figure out what caused a train to derail Thursday night at the Howard station, leading to a power outage.At one point, 25 passengers were stuck on a different Red Line train between stops near Morse. Rescue crews helped everyone get off that train and on to shuttle buses safely.CTA repair crews managed to fix the problem at Howard overnight and service was back to normal Friday.
CHICAGO, IL・2 DAYS AGO
CBS Chicago

CHICAGO (CBS) -- A body was pulled from Lake Michigan Saturday morning. According to the Chicago Police Department, the CPD Marine Unit recovered the body of an adult man from the lake near the 1100 block of South Lakeshore Drive just after 11 a.m.Detectives are conducting a death investigation, pending autopsy results. No further information was immediately available.
CHICAGO, IL・21 HOURS AGO
CBS Chicago

AURORA, Ill. (CBS) -- The City of Aurora is saying goodbye to a beloved advocate for young people. Fred Rodgers was Aurora's first youth director and served in that role for nearly 25 years. He died early Saturday morning. Aurora Mayor Richard Irvin said Rodgers built and award-winning, nationally recognized youth department that impacted the lives of tens of thousands of children. Irvin issued the following statement regarding Rodgers' death: It is with great sadness that we have learned of the death of Mr. Fred Rodgers. A fierce champion and advocate for youth, he passed away early Saturday morning. The City of Aurora's...
AURORA, IL・19 HOURS AGO
CBS Chicago

CHICAGO (CBS) – Three people are hospitalized following a shooting inside an apartment hallway in East Chicago Saturday morning. Police said around 10:45 a.m., officers were dispatched to the Atlas Apartment Building, located at 4425 Indianapolis Blvd, in reference to a shooting.Upon arrival, officers located a male outside in the rear of the location with a gunshot wound to the leg. Upon entering the location, two females were also found shot – one was shot in the hip and the other was shot in the leg. Two of the victims were taken to St. Catherine Hospital in East Chicago and the 3rd victim to Community Hospital in Munster. All three have non-life-threatening injuries.The ages of the victims are unknown. Police say it was an isolated incident between two feuding neighbors who live in the building and there is no threat to the public. Investigation into the shooting is ongoing. Anyone with any information can contact the Criminal Investigation Division at 219-391-8318 or send an anonymous tip to 219-391-8500.
EAST CHICAGO, IN・2 DAYS AGO
CBS Chicago

CHICAGO (CBS) -- Starting today, a 211 call center will be available for Chicago and suburban Cook County residents.211 Metro Chicago connects people with essential health and social service support and information during times of non-emergency crisis and for everyday needs.A launch party for the 211 social service connector will be held this morning at 9:30 a.m. at the Greater Chicago Food Depository.
CHICAGO, IL・3 DAYS AGO
CBS Chicago

Months after a school bus damaged her car, Chicago woman left with $800 in repairs

CHICAGO (CBS) – A school bus coming to pick up Chicago Public School kids hit some cars. The driver didn't stop, and instead continued on his route.The owner of one of the cars hit is not only angry, she was left with paying the damage. She is worried for the safety of others.CBS 2's Sara Machi had the story.Lilian Beal said she was inside Carrie Jacobs Bond Elementary School for a conference on Sept. 8 when people ran inside talking about a bus that had hit some cars. They told her as the bus was heading to the school, the...
CHICAGO, IL・2 DAYS AGO