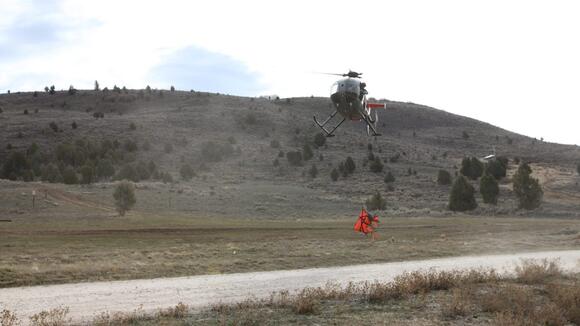 UTAH — With Christmas and thoughts of Rudolph on the horizon, the Utah Division of Wildlife Resources will be proving that deer can fly although be it with some assistance from a helicopter. Each year DWR captures roughly 1,000 big game animals such as moose, elk, buffalo, pronghorn and deer in order to perform health assessments and place GPS collars on the animals to better understand migration patterns. This year’s efforts will be taking place from late November to mid-December.

The process is well-planned and executed in a way to minimize stress on the animals. First, the target animals are located and then captured with the use of a net gun fired from a helicopter. The animals are then transported to a staging area where the assessments take place. 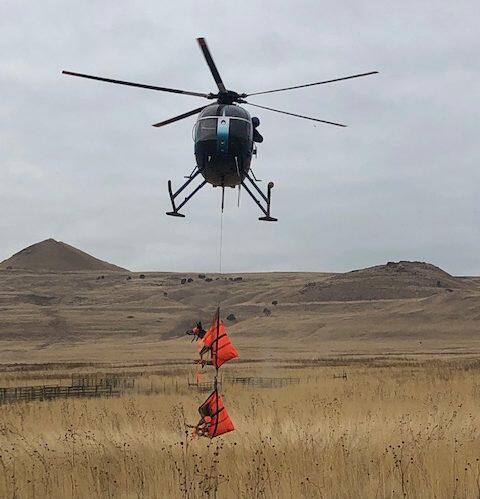 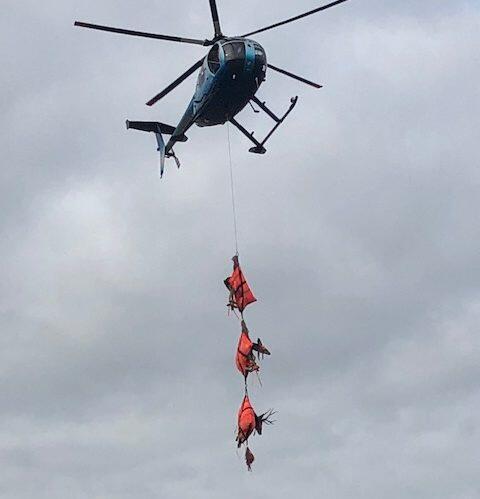 Being able to track animals from one year to the next can tell biologists a lot about what is happening to animals around the state. Biologists are able to answer big questions, such as how long a deer lives within the state. Measurements of fat content can give a sense of the health of the animal. In addition, an implant is placed inside a mule deer doe that will fall out when they give birth allowing biologists to find recently born fawns.

“It’s interesting to follow an animal through its lifecycle — it teaches us a lot about their behavior and movements,” said Jim Christensen, DWR regional wildlife manager.

DWR conducts these captures during the lead-up to winter because cooler temperatures help with the stress animals feel, as large game animals have a harder time regulating their body temperature. Cooler temperatures also help in the recovery of the animal when they are released.

Winter weather brings a change to many species’ habits as food becomes less available due to snowfall, forcing them to move to lower elevations making their targeted species easier to find. The increase in moose sightings around Park City and the large elk herd that travels within the area and is frequently located at Swaner Preserve are prime examples of this.

Deer Valley World Cup, less than a week away

UTAH — The Utah Division of Wildlife Resources investigated and is currently prosecuting nine cases of illegally killed ‘trophy’ elk and deer. While most hunters follow the rules and fulfill […]
UTAH STATE・2 DAYS AGO
TownLift

SUMMIT COUNTY, Utah — The above-average snow year is a blessing for many aspects of the environment across the state, but it doesn’t come without its downsides, as snowfall and […]
SUMMIT COUNTY, UT・5 DAYS AGO
TownLift

“Hope in the Water” sheds light on protecting blue food

PARK CITY, UT—Every year, the Sundance Film Festival showcases inspiring documentaries and independent films from around the world from creatives that have found a unique way to tell a story. […]
PARK CITY, UT・4 DAYS AGO
TownLift

PARK CITY, Utah — The Park City Police Department has asked for the public’s help in the search for a bronze bear statue that has been stolen from a residence […]
PARK CITY, UT・4 DAYS AGO
TownLift

PARK CITY, Utah — The Park City Fire District shared the first black and white photo yesterday in what it said will be a monthly series throughout 2023. “Black and […]
PARK CITY, UT・2 DAYS AGO
TownLift

Summit, Wasatch and Utah Counties are coming together with Community Food Access Survey

SUMMIT COUNTY, Utah — As everyday items and food prices continue to rise, the potential for food insecurity grows. Egg prices alone increased by 49% over 2022. In an effort […]
SUMMIT COUNTY, UT・4 DAYS AGO
TownLift

New year, new knife: How to choose your chef knife

PARK CITY, Utah — A quality chef knife will transform your cooking from a chore into a joy. Look forward to food prep as an opportunity to “play” with your favorite […]
PARK CITY, UT・2 DAYS AGO
TownLift

PARK CITY, Utah — The Park City Fire District responded to a call involving a truck that was towing a horse trailer on the evening of Friday, January 20. In […]
PARK CITY, UT・5 DAYS AGO
TownLift

PARK CITY, Utah — In a world where the necessity to move beyond fossil fuels has only become magnified, the questions surrounding the costs of an electrified world are still […]
PARK CITY, UT・2 DAYS AGO
TownLift

UTAH — With February around the corner, the Utah Division of Wildlife Resources reminds those interested in gathering shed antlers between February 1 and April 15 to take the free […]
UTAH STATE・8 DAYS AGO
TownLift

“Stephen Curry is a good person and his kids are funny”

The Deepest Breath, a Netflix documentary at Sundance

PARK CITY, Utah — The Deepest Breath premiered this week at the 2023 Sundance Film Festival. The documentary explores the world of Freediving. Freediving is underwater diving that relies on […]
PARK CITY, UT・3 DAYS AGO