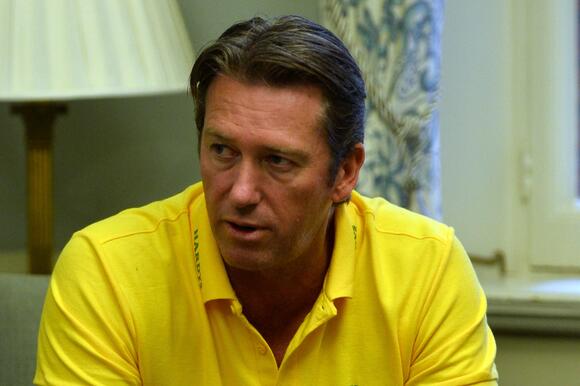 Little more than 4,000 fans trickled into the vast MCG for the last of three 50-over matches between the old rivals, leaving huge swathes of the venue completely empty.

Just nine days earlier over 80,000 attended England’s T20 World Cup win over Pakistan at the same stadium, leaving players, fans and pundits united in their criticism of the scheduling.

But McGrath, a three-time World Cup winner in ODI cricket, believes the problem runs deeper than one poorly planned series and feels serious thought has to be applied to avoid the format being squeezed out of the calendar permanently.

“It was so disappointing to see crowds like that, ODIs are really under the pump at the moment,” he told the PA news agency from his Queensland home.

“Melbourne is classed as the sporting capital of Australia, if not the world, they absolutely love their sport. So for them to turn out in the numbers they did speaks volumes about where we’re at.

“The powers that be really have to watch that they don’t put games on just for the sake of it, games that don’t count for anything. The international schedule is tough enough. I think they have to respect every series and every game, it has to mean something.

Melbourne is classed as the sporting capital of Australia, if not the world. So for them to turn out in the numbers they did speaks volumes about where we're at.

“We’ve got to protect the game. T20 cricket is always growing, it’s fast, quick and exciting and Test cricket really is the ultimate. I think those two formats will stand the test of time.

“I do hope ODI cricket carries on, I’ve got a lot of great memories of it and I would still put the ODI World Cup as more important than the T20. But the format is under the pump and we need to look at how we keep people coming to these games.”

McGrath is heading back to England next spring for a theatre tour with Test Match Special commentary partner Jonathan Agnew , paving the way for a big Ashes summer in 2023.

The 52-year-old routinely predicts 5-0 Australia wins but, while they came close to a whitewash Down Under last winter, he expects a much more competitive England side after a major overhaul under Brendon McCullum.

“I love coming to the UK, it’s always amazing how many English people come to me and say ‘I used to hate you with a passion when you played, but now you’re retired you’re OK’,” he said.

“I take that as a compliment. There’s a bit of mutual respect and fun there. I’m not sure what happened in the last Ashes but it wasn’t good. England didn’t even show up.

“But this time will be different. With Baz McCullum on board, Ben Stokes as captain and Joe Root being allowed to just go and play, they are a lot more positive.

“They back themselves really well and when it comes off it’s amazing. I think Australia could even take a leaf out of their book and just go out there backing themselves.”

A tearful Novak Djokovic described his Australian Open triumph as the biggest and most challenging victory of his career after he beat Stefanos Tsitsipas of Greece 6-3, 7-6 (4), 7-6 (5) to win his record-extended 10th title in Melbourne. “Only my team and family know what we have been through...
22 MINUTES AGO
The Independent

Stefanos Tsitsipas declared Novak Djokovic “the greatest to have ever held a tennis racket” after the Serbian won their Australian Open final in straight sets to win a record 10th title in Melbourne. Djokovic, 35, has now drawn level with Rafael Nadal on 22 grand slam victories, two clear of the retired Roger Federer, and seems as dominant as ever on the court despite his advancing years. “Novak, I don’t know what to say, the numbers say it all,” Tsitipas said, speaking on court after the match. “It’s been an unbelievable journey for you and I admire what you have...
3 HOURS AGO
The Independent

Conservationists are concerned about Scotland’s population of puffins after hundreds of the birds were found dead or in poor health along the shores of Spain’s Canary Islands.British ornithologists - those who study birds - have called for urgent research after a number of puffins washed up on the Spanish archipelago and other mainland regions, including Galicia and Asturias.Scientists have so far been unable to establish how the puffins died but some fear changes in oceanography and climate change could be to blame.The UK is home to around 580,000 pair of breeding puffins, with the vast majority of them living...
32 MINUTES AGO
The Independent

A tearful Novak Djokovic described his record-equalling 22nd grand slam title as the biggest victory of his life after overcoming injury and difficult emotions to triumph once again at the Australian Open.A year after seeing Rafael Nadal pull ahead in the all-time men’s standings while he tried to process the fall-out from his deportation from Australia, Djokovic has been determined to show that Rod Laver Arena is his stage.He dropped just one set all tournament – despite saying he feared a left hamstring problem might force him to withdraw – and finished with a 6-3 7-6 (4) 7-6 (5) victory...
1 HOUR AGO
The Independent

Novak Djokovic made history again at the Australian Open by winning his 10th title.The Serbian defeated Stefanos Tsitsipas 6-3 7-6 (4) 7-6 (5) in the final to join Rafael Nadal at the top of the men’s standings on 22 grand slam titles.He also overtakes Carlos Alcaraz to regain the world number one ranking.Picture of the dayTweet of the dayCongratulations on a 10th Australian Open title Novak Djokovic, 35 and at the peak of your powers. You’ve been as relentless as I’ve seen you these past two weeks. It was a privilege to watch such a superb final against your young...
2 HOURS AGO
The Independent

An emotional Novak Djokovic described his record-equalling 22nd grand slam title as the biggest victory of his life.A year after seeing Rafael Nadal pull ahead in the all-time men’s standings while he tried to process the fall-out from his deportation from Australia, Djokovic has been determined to show that Rod Laver Arena is his stage.He dropped just one set all tournament – despite saying he feared a left hamstring problem might force him to withdraw – and finished with a 6-3 7-6 (4) 7-6 (5) victory over first-time Australian Open finalist Stefanos Tsitsipas to claim a 10th title in Melbourne.Novak...
3 HOURS AGO
The Independent

Moises Caicedo was missing from the Brighton squad for their FA Cup match against Liverpool, but boss Roberto De Zerbi still hopes to keep the wantaway midfielder.Ecuador international Caicedo has made public his desire to leave the club after Arsenal had a £60million bid for him turned down on Friday.De Zerbi was asked about the future of the 21-year-old before kick-off.We hope he stays with us until the end of the seasonRoberto De ZerbiHe told ITV: “Moises is a good guy, we will see tomorrow and the next days what happens. We hope he stays with us until the end of the season.“In life you can make mistake. For everyone there are many solutions. We will see the best solution for him and for us.”
2 HOURS AGO
The Independent

Ieuan Evans has vowed to remain as Welsh Rugby Union chair despite allegations of a “toxic culture” at the organisation that resulted in chief executive Steve Phillips’ resignation on Sunday.Phillips’ resignation came after a turbulent week in Welsh rugby following a documentary airing allegations of misogyny, sexism, racism and homophobia at the game’s governing body in Wales.Former Wales wing Evans, who only took over from Rob Butcher in November 2022 and has announced that an external taskforce will be set up to tackle the allegations levelled at the WRU, said: “For the moment I need to lead this governance change...
3 HOURS AGO
The Independent

Brighton beat Liverpool at the Amex to knock out the FA Cup holders after Japanese winger Kaoru Mitoma scored a brilliant late winner.Harvey Elliott had put Liverpool in front before Brighton equalised with a stroke of fortune when Tariq Lamptey’s shot was deflected home by Lewis Dunk, making it level at the break following an entertaining first half. Both sides created chances to win it in the second period but it was Mitoma who finally delivered the quality required, taking a calm touch before flicking the ball away from a defender and steering it into the far corner past Alisson to spark bedlam at the Amex. Read More When is the FA Cup fifth round draw?Transfer deadline day: What every Premier League club needs
1 HOUR AGO
The Independent

Strong winds of up to 80mph are expected to hit Scotland and parts of northern England next week.A yellow weather warning for wind is in place for the whole of Scotland between the hours of 8pm on Tuesday and 9am on Wednesday.Meteorologists said the extreme weather, caused by a deep area of low pressure passing to the north of Scotland, will likely cause strong winds in parts of northern England too.⚠️ Yellow weather warning issued ⚠️Wind across ScotlandTuesday 2000 – Wednesday 0900Latest info 👉 https://t.co/QwDLMfRBfsStay #WeatherAware⚠️ pic.twitter.com/VIp8H8l8Fr— Met Office (@metoffice) January 29, 2023Forecasters said travel could be disrupted in the...
2 HOURS AGO
The Independent

At least one man has been killed due to flash floods and landslides in New Zealand, taking the total death toll to four in the country’s North Island area that is reeling under heavy rain for the third consecutive day.Police officials confirmed that the death of a man who went missing after being swept away by floods on Friday at Onewhero village, about 70km south of Auckland.“The most horrific part of it [rains and floods] is that we’ve lost lives,” deputy prime minister Carmel Sepuloni said in Auckland.Newly appointed prime minister Chris Hipkins said the flood impact was “unprecedented”...
4 HOURS AGO